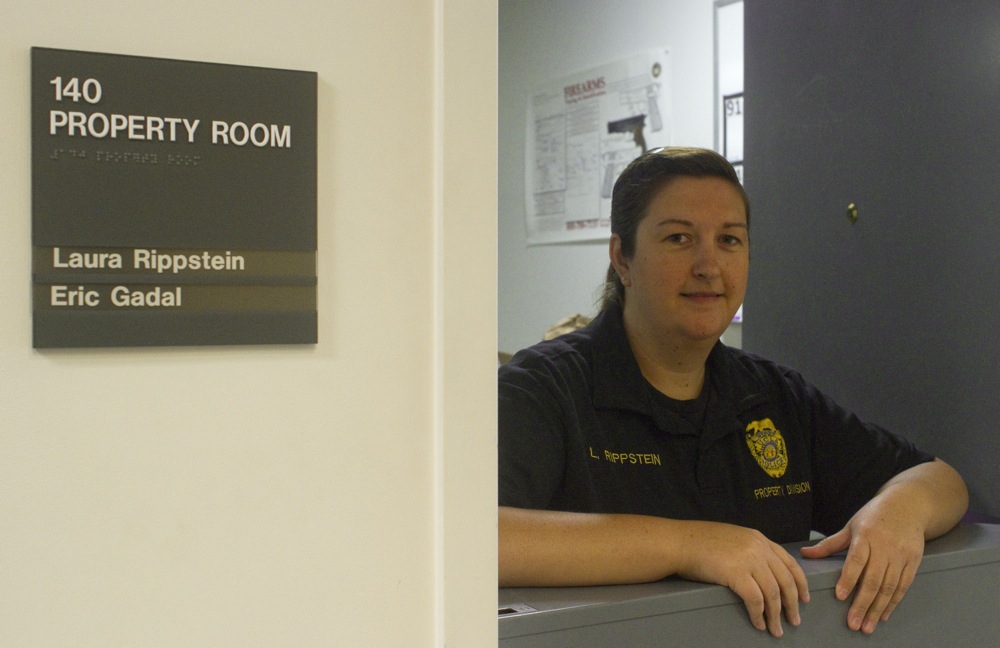 Laura Rippstein serves as a gatekeeper for the UCPD’s property department, where all evidence from police investigations and lost items from around campus are securely stored. The department houses more than 3,000 items, Rippstein said.

Lost purses, a dozen poisoned dead fish and every so often, a deadly weapon are stored in Laura Rippstein’s office.

Rippstein works in the university police’s property department, a strictly secured room on the bottom floor of the police department’s building on Westwood Plaza. She and the other workers in the property department monitor every piece of evidence from UCPD’s investigations and sort through lost items found around campus or in Westwood.

“There (are) easily at least 3,000 items booked in the property department, and pretty much every day we are booking new things,” Rippstein said.

The gray room is filled with common lost items such as laptops, bikes and boxes overflowing with keys. The walls are lined with refrigeratorsand freezers to store perishable evidence and a heavy metal safe for the occasional obtained gun.

Inside one of the freezers are some of the more bizarre pieces of evidence Rippstein watches over – about 12 poisoned fish. The fish are evidence from a case that happened years ago, when someone poisoned, killed and kept the fish, likely as part of a research project, in one of the UCLA science buildings, Rippstein said.

Frozen fish are not the only oddities in the property department’s room.

“The most bizarre thing I have ever booked was probably this really odd bike where someone had hollowed out the frame and placed the end of a sharpened sprinkler turner in there,” said Eric Gadal, another officer who works in the property department. “He pretty much had a sword in his bike that he could just take out at any time. We never knew whose it was, as it was in the lost and found.”

Rippstein came to UCPD five years ago looking for a job with consistency.

She said she enjoys working there because while the framework of her days stays constant, daily tasks are always different.

“It’s nice to have variety while you’re still in the same place,” she said.

One key part of her daily routine is categorizing and processing the evidence stored by the department. Evidence found at a crime scene must be processed following a specific set of procedures.

Upon its discovery, police must bag and annotate evidence, and everything but flammables, perishables and explosives gets sent to the property department, said UCPD Lieutenant Mark Littlestone. Police make weapons as safe as possible before they reach the station – for example, any remaining bullets in a gun are removed.

Blue evidence lockers of varying sizes form one wall of the room. Police put evidence in one side of the lockers, and property department officers remove the evidence from the other side to begin the intake process. The secure system means nothing is unaccounted.

While all the items are specific to their case, there is a certain ebb and flow to the types of items the property department receives.

“Years ago we recovered stolen car radios, and now we don’t get those as much as stolen cell phones and stolen laptops,” Littlestone said.

Fall is the time of year when items from the dorms that students did not want to bring home, such as bedding, mini-refrigerators and clothes, start coming in, Rippstein said.

The most rewarding aspect of the job is returning lost items to the people who rightfully own them, Gadal said. Some items have been returned to people as far away as France, he said.

“Remember when your mom told you to always write your name on stuff? The same thing applies now,” Gadal said. “Except (you need to) know the serial numbers of everything so you can call it in and we can help get it back to you.”

Littlestone said incoming students often are not as aware of their property as they should be, making them more likely to lose personal belongings. He said it’s important never to leave a backpack, laptop or cell phone by itself, even for a few minutes.