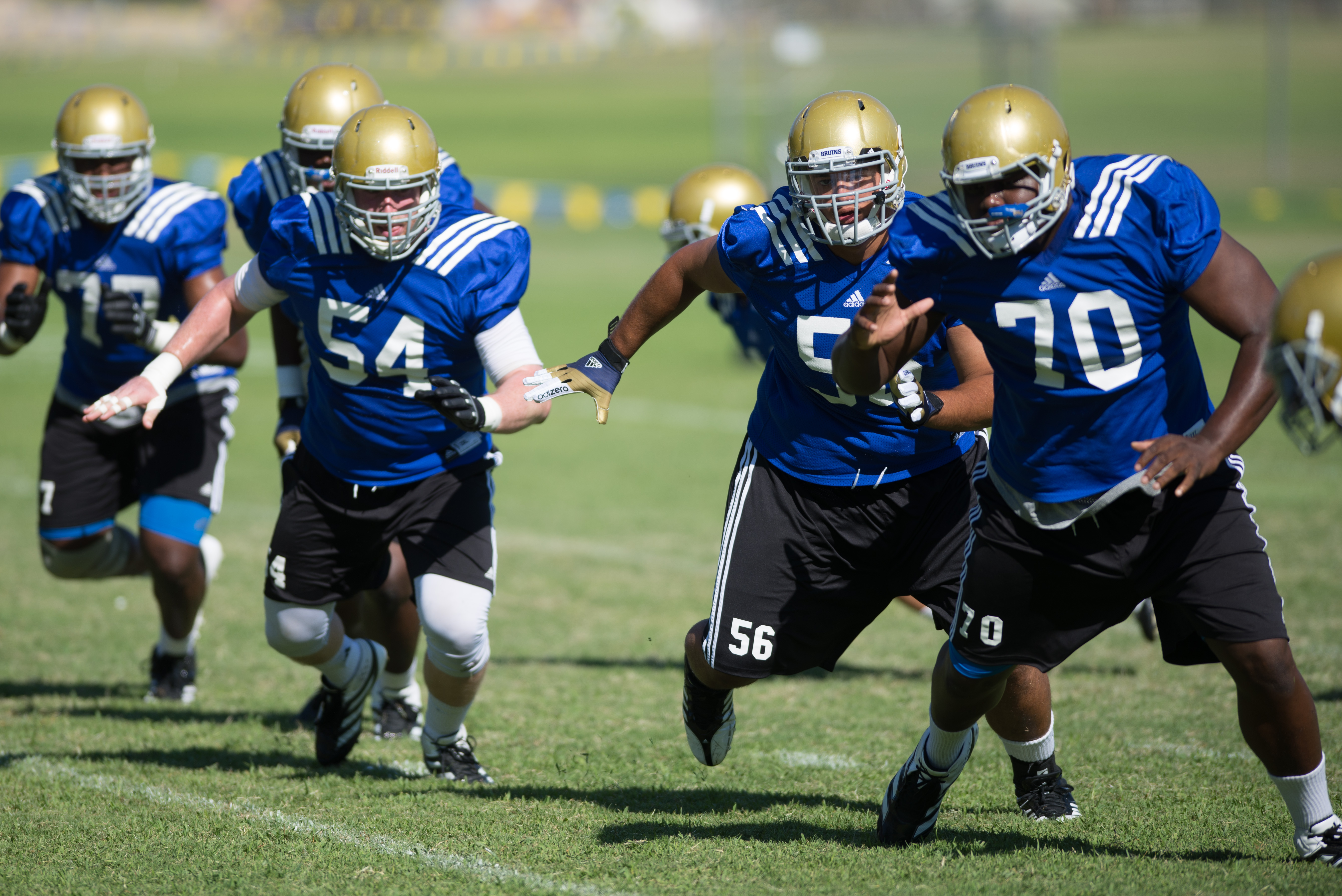 Sophomore offensive tackle Simon Goines (70) and the offensive line are maturing during fall camp despite being a young unit.

Such was the case with UCLA football coach Jim Mora both during and after Saturday’s morning practice, in which he saw his defense’s discipline falter in a stretch of plays that Mora described as “not acceptable.”

“We’ve got to eliminate all those things from our program,” Mora said. “And by adding the music, and adding the chaos and adding the pressure, I think we’re going to be able to move through that stuff.”

Redshirt senior defensive end Keenan Graham, who has seen continued reps with the first unit over the last few days, likewise expressed his disappointment in the defense’s inability to stay onside during UCLA’s extended 11-on-11 scrimmaging drill.

“We definitely had a lot (of penalties) today and running a fast-paced offense, you get tired and it’s a little hard to focus, so it’s something we’ll probably emphasize … for sure,” Graham said.

The offensive line, which lost one of its own when sophomore offensive tackle Ben Wysocki and freshman outside linebacker Myles Jack got into a minor scuffle and were ejected from practice for the morning, did not claim any special method to yield the defense’s continued nightmare in yellow.

Klemm said the unit has, however, seen a jump in maturity, particularly at the tackle positions, where redshirt sophomore Torian White and sophomore Simon Goines have cemented themselves at their respective positions after both struggled with injuries and consistency for much of last season.

Goines has risen to the occasion as the team’s left tackle and said he believes there is a special sense of pride in his duty of protecting the blind side of right-handed redshirt sophomore quarterback Brett Hundley.

“You have to (protect him), or he’ll get blasted,” Goines said. “Really, you have to make it personal … basically like somebody’s trying to get your mom or something.”

A year after the two were considered the young and inexperienced members of an offensive line that was slimmed to less than 10 in the scorching August heat of San Bernardino, they’ve now had to take on a slight mentorship role in a group of 16 offensive linemen whose most experienced member, left guard Xavier Su’a-Filo, is a junior.

Goines said he sees a little bit of his own path in freshman right guard Caleb Benenoch, who likewise has seen primarily first team reps in camp without a single collegiate snap under his belt.

“He’s kind of going through the same things I went through,” Goines said. “He works hard, but sometimes he lags a little bit, but you just need to keep pushing him because he’s a freshman and he isn’t used to it.”

Klemm pointed out Benenoch’s high football IQ as a freshman, which he said stems from his sound high school coaching at Seven Lakes High School in Katy, Texas. As important as that intelligence will be in the coming months, Klemm said the offensive line inherently makes for a tough initial transition because of its nuance.

“It’s not like other positions like receiver where maybe a guy can come in as a receiver as a fast guy who can learn, or a defensive lineman where … you’re just rushing the passer,” Klemm said. “But there’s so much that goes into offensive line play, you know making calls, playing with leverage and hand placement.”

The overall increase in bodies bodes well for the Bruins during camp and throughout the 2013 football season, as it provides them with the opportunity to maintain first-, second- and third-string units, a luxury that now allows players to rest and execute in offensive coordinator Noel Mazzone’s fast-paced offense.

But while they are 16 deep, they are still mostly inexperienced, and Klemm knows his line will take time to perfect.