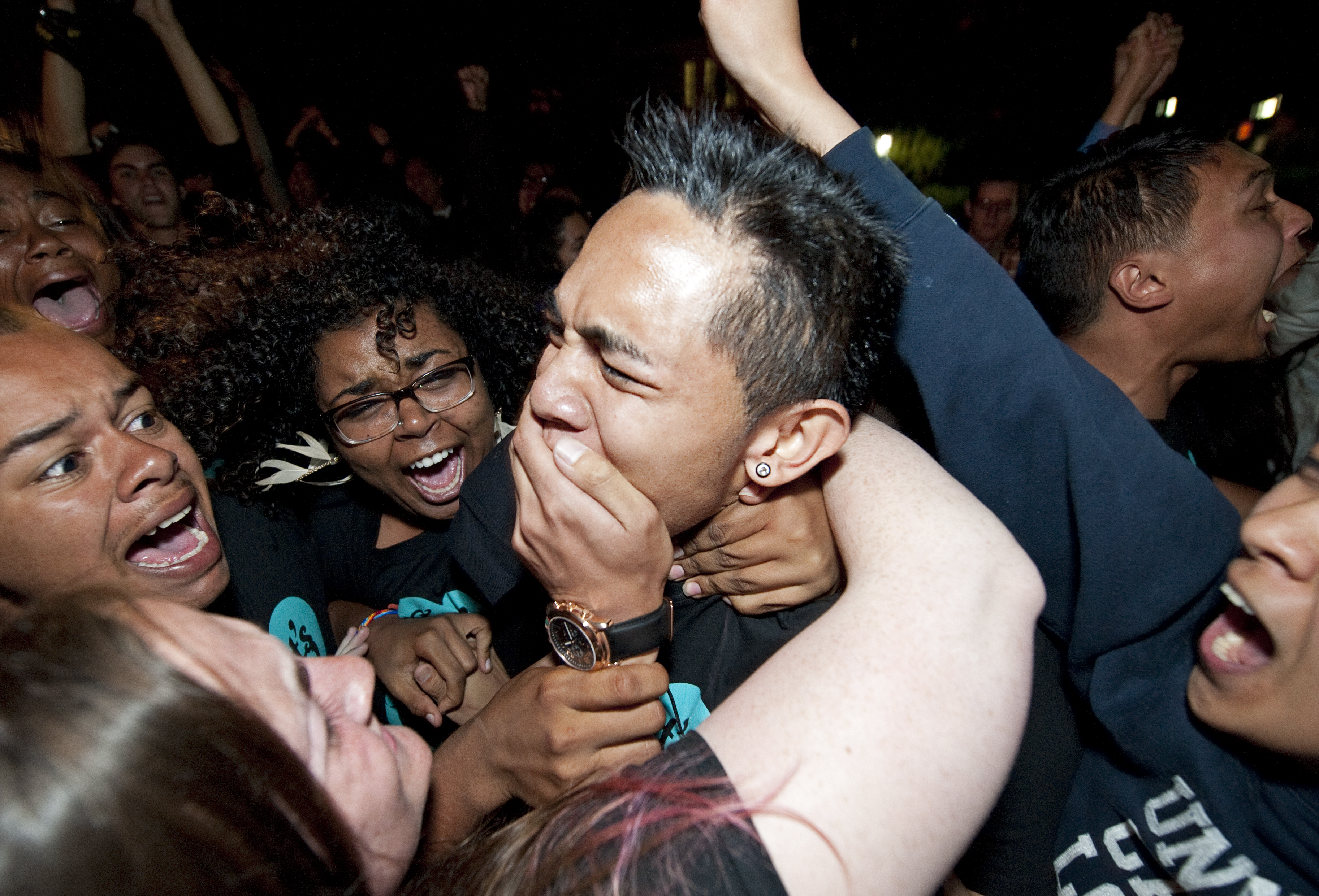 John Joanino, a third-year sociology student and presidential candidate for the LET’S ACT! slate, reacts to being elected as the 2013-2014 Undergraduate Students Association Council president. Joanino was one of four LET’S ACT! candidates to be elected Thursday night and will lead a Bruins United-majority council next year.

The original graphic accompanying this post contained an error and has been changed. See the bottom of the article for additional information.

LET’S ACT! candidate John Joanino was narrowly elected undergraduate student government president in a runoff vote, and will lead a council dominated by Bruins United, the slate that has held a majority for three years.

Next year will mark the first time since 2005 that the president is from a different slate than the one with a majority on council.

The Bruins United slate has now claimed six out of nine contested seats, while LET’S ACT! – one of the new slates in this year’s elections – secured four positions. Bruin Alliance, the other new slate, did not secure any seats.

“This campus really needs a student government that is student-centered, and I think we can do that regardless of which party has majority,” said Joanino, who started crying once the results for president were announced.

Many of the elected candidates for contested positions slid into victory, with margins of about 5 percent or higher. Voter turnout this year was 36.6 percent – 6.6 percent more than last year.

Independents took three out of the four uncontested positions in this year’s elections.

None of the presidential candidates received a majority of the student vote. The results were based on a runoff system, in which Taylor Bazley, who received the lowest number of votes, was eliminated in the first round.

Bazley’s votes were then transferred to Joanino and Carly Yoshida, the Bruins United candidate for president.

After the votes were transferred, Joanino, a third-year sociology student, had about 52 percent of the vote.

Yoshida, a current general representative and third-year English student, followed behind with about 48 percent of the vote.

Members of Bruins United, the slate that currently holds eight seats on council, said they are confident in Joanino’s ability to lead a council that will be split among two slates.

“John (Joanino) is not from BU but I am looking forward to looking past slate lines and actually make things happen next year,” said Armen Hadjimanoukian, who was elected as next year’s Facilities commissioner. “What I really care about is getting things done.”

Bazley, a third-year political science student who was one of two candidates running with the Bruin Alliance slate, said he is proud of how far he and his supporters have come in the past year.

“This has been miles ahead of where we were last year,” said Bazley, who ran for Financial Supports commissioner last year as an independent candidate and lost by a slim margin. “We feel like we’ve changed the behavior of other parties, which was our goal.”

“The work never stops,” she said. “I didn’t win an office, but that doesn’t mean I’m going to stop working.”

Next year’s external vice president, Maryssa Hall, said that even though Bruins United received a majority of the positions, LET’S ACT! candidates won crucial seats and will continue to work on the slate’s platforms.