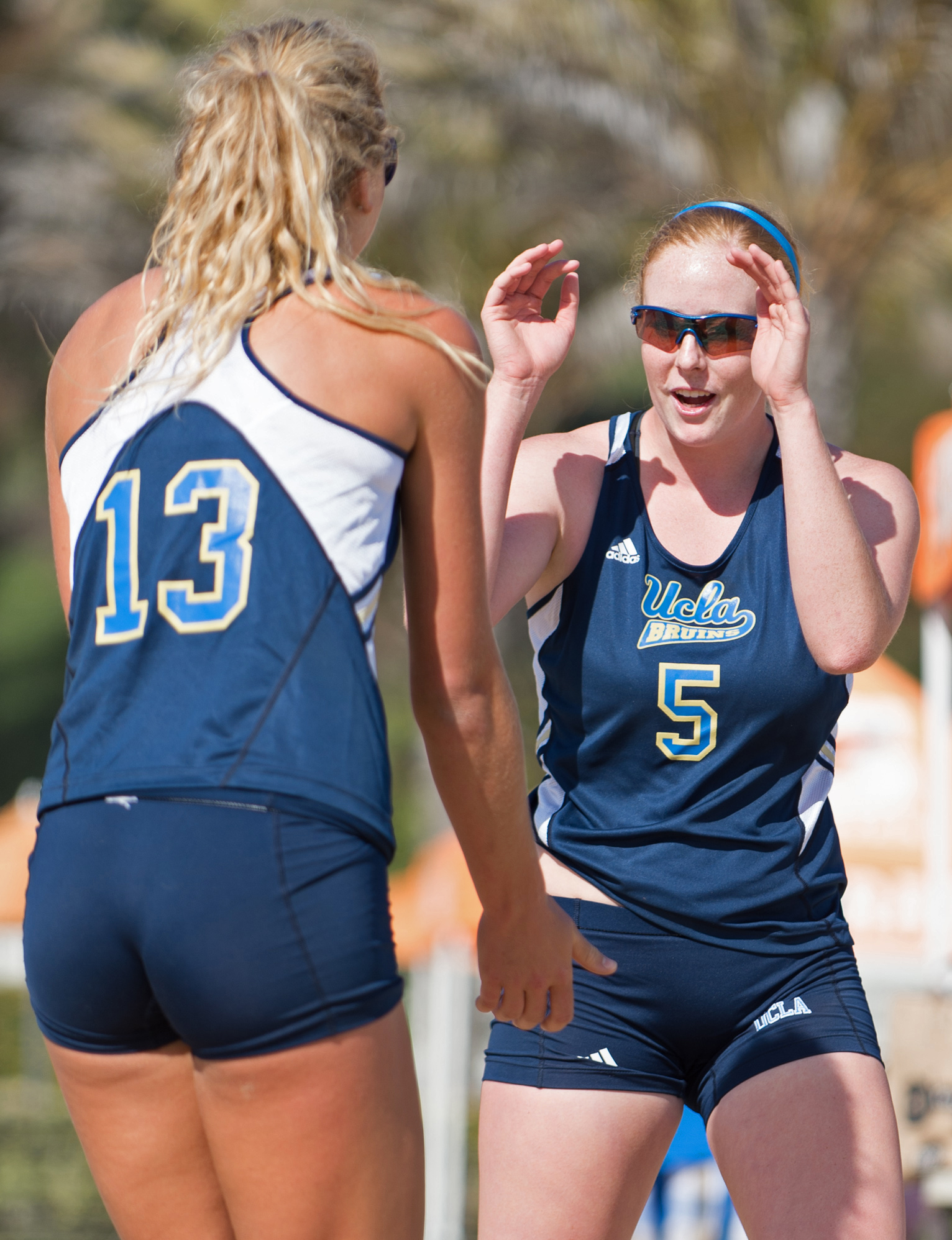 With only four players at the championships, freshman Becca Strehlow and sophomore Zoë Nightingale have benefited from individualized training.

In the airport en route to the first collegiate sand volleyball national championships any Bruin has ever competed in, Zoë Nightingale had another novel experience.

Traveling only with the three other sand volleyball players who qualified for the championships and their coach, the sophomore found herself fielding questions about who they were and where they were going – questions much less common when the full complement of tall indoor players are traveling together.

“It’s kind of weird,” Nightingale said. “I’ve never traveled with such a small group. But it’s fun. It’s a group of people that I really like, so that’s pleasant.”

For players used to the powerful team dynamic of indoor volleyball, with all the noise and energy that comes with it, taking a single van from the airport to the hotel was an off-putting experience.

“It was just the four of us and (coach) Stein (Metzger) … We feel kind of incomplete without everyone else,” said freshman Becca Strehlow, Nightingale’s partner.

After learning that only four Bruins – Strehlow and Nightingale as well as juniors Meg Norton and Kelly Reeves – had been selected to compete in the individuals championships, the rest of the team turned its attention to the next indoor season.

And while the days since the announcement may have been strange for the four players, it also gave them an opportunity for focused, individualized work with the coaches. That specialized attention has largely been focused on breaking players of habits they’ve developed from years of playing and training for the indoor game.

“It’s nice to have a little time off to go back to the drawing board and work on some things they’re not quite used to,” Metzger said. “When you’ve trained (at) something for a decade, it’s hard to flip a switch and change.”

With their limited experience in mind, players are trying to keep their goals for the weekend in perspective.

“The opportunity of coming here is what I was really looking forward to,” Strehlow said. “Zoë has less beach experience, so I just want her to have fun. We both just need to relax and realize how far we’ve come.”

The Bruins said their next goal will be to bring all their teammates along next year by earning a team bid. But for now, the small group is focused on the task at hand.

“Yes, there’s less people and there’s less personalities and it’s really fun to … have a big squad and have everyone chiming in, but we’re here to work,” Metzger said.