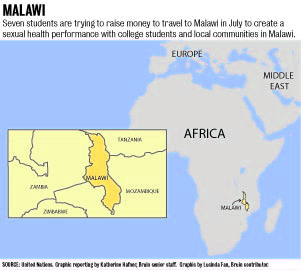 If successful, the group of seven UCLA students will travel to Malawi in July to work with Malawian college students and community members. They will create performances to address challenges in sexual health.

The students, led by faculty from the UCLA Art and Global Health Center and Malawi’s Chancellor College in the southern city of Zomba, will perform realistic conflicts surrounding HIV and AIDS and use community involvement to find solutions, said UCLA Sex Squad  director Bobby Gordon, one of the program’s leaders and a former Daily Bruin sports editor.

The students have set up their crowd-funding effort through a website called indiegogo. If they fall short of the goal, they get nothing.

The goal is to raise enough money to fund most travel and program costs for the students, at about $6,000 each, said Sebastian Milla, a fourth-year world arts and cultures student who is leading the fundraising efforts.

The program was originally supposed to be organized through the UCLA International Education Office, but not enough students signed up by the April 5 deadline because of the high program cost – it was $9,000 per student including travel expenses, David Gere, a world and arts professor who heads the program, said. There was still high interest from students, though, so the Art and Global Health Center decided to put on the program independently. That decision lowered the program cost because students no longer have to pay for summer units.

But organizing independently also makes it more difficult to secure financial aid through the university, which is why the students turned to crowd-funding.

The students had raised $1,325 as of press time Wednesday, and today is the halfway point of the fundraising effort.

This international endeavor is different from others because it involves Malawians and Americans working equally with each other to discover problems and create solutions as a team, rather than one coming in to help the other, said Galia Boneh, a UCLA alumna who will lead the the program with Gordon.

The Malawian contingent of this program will include college students, as well as HIV-positive community members who are comfortable talking about their status. In Malawi, about 11 to 14 percent of the population is HIV-positive, and the topic is stigmatized, Boneh said. One of the challenges is that people must be willing to talk about HIV for prevention efforts to be successful, she said.

Boneh has held similar “MAKE ART/STOP AIDS” performance programs, on a smaller scale, in Malawi and Ghana. She said the programs have yielded conversations between community members, but also more visible results, like an HIV-positive woman deciding to return to school and younger students setting up a fund and support group for returning students.

There is a sense of cautious optimism despite the large amount of money left to raise and the short amount of time they’ve given themselves, Milla said.

“It seems that my team is going to have to be a second-half team,” Milla said. “I have been emailing like a crazy person, emailing anyone and everyone who has a pulse and money to go with that pulse.”

The team is also offering personalized donation incentives, like an original haiku for the lowest level donors, a sex positive poem or prose for mid-level donors and a private performance for the highest level.

In cases where the fundraising goal is as high as $48,500, the most effective method is to split it up into multiple, smaller goals, said Helen Bologolova, an Anderson doctoral student in marketing and business whose research includes crowd-funding. When the overall goal is less daunting, people are more likely to contribute because they feel their donation will make a tangible difference, she said.

But for him and his team, Milla said, fundraising for the project together represents the team dynamic they have to rely on to be successful both here and if they reach Malawi.