Bruins honor the memory of victims on Holocaust Remembrance Day 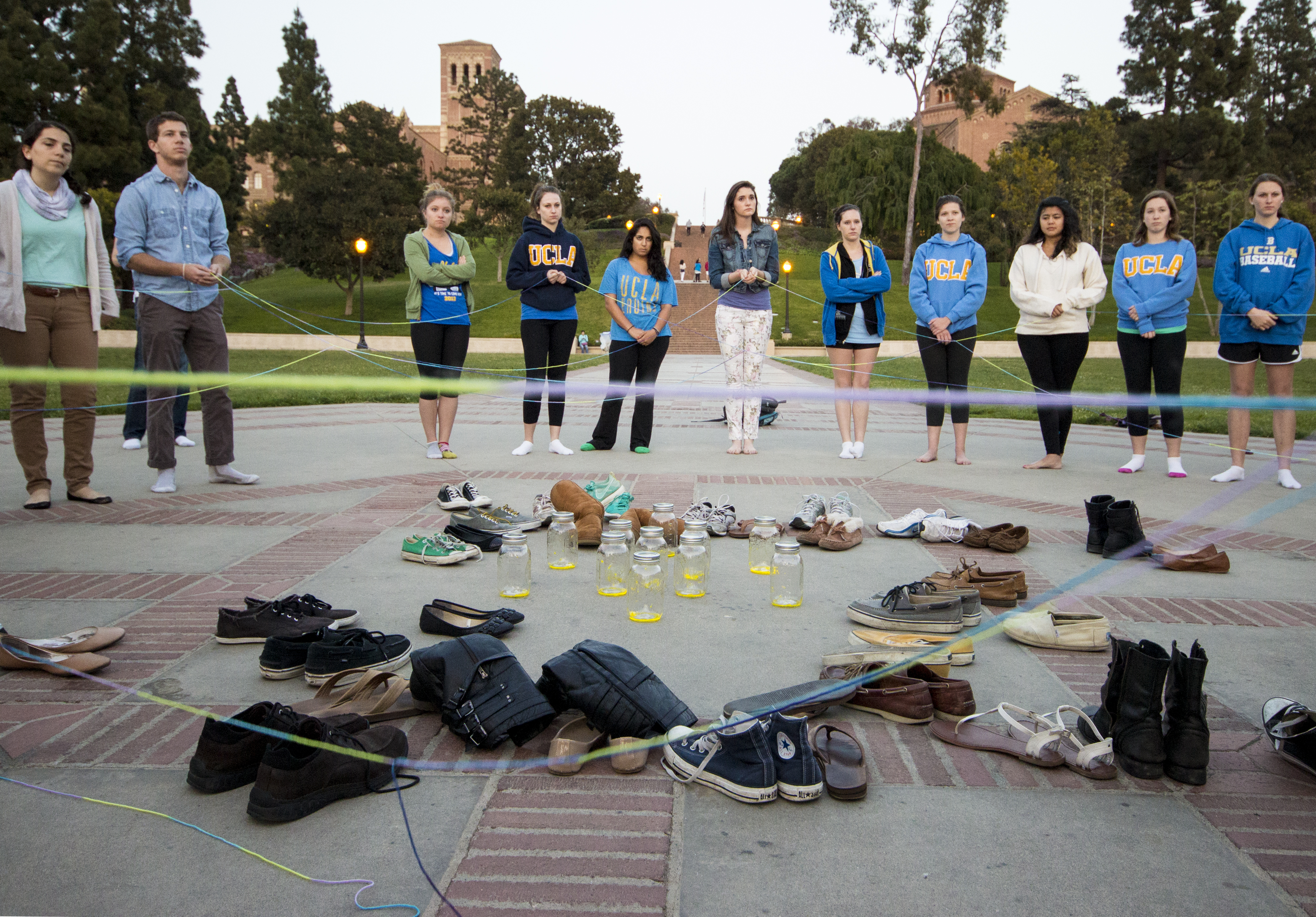 Students stand around a circle of shoes surrounding 11 jars representing the nearly 11 million people killed in the Holocaust. The ceremony, which took place Sunday night, is part of Holocaust Remembrance Day. The event was organized by the student group Bearing Witness.

Dozens of empty shoes lie strewn around 11 empty jars, 11 jars in memory of the nearly 11 million people killed during the Holocaust.

The student group Bearing Witness, a group within the Jewish organization Hillel that connects students to Holocaust survivors, hosted a ceremony on Sunday night in Wilson Plaza to commemorate this year’s Holocaust Remembrance Day.

The shoes symbolized the piles of shoes created when Jews were forced to take off their personal belongings upon entering a concentration camps, said Ashton Rosin, a third-year international development studies student and student director of Bearing Witness.

About 40 students circled around the shoes and jars, all of them sharing reasons for being at the ceremony, reasons that ranged from specific persons they had encountered in their lives to the more general remembrance of those who lost their lives.

Participants left the event with string bracelets on their wrists. Rosin said the bracelets serve as a constant reminder that remembering those gone and those still living is an active pursuit, not one reserved only for a few days a year.

Holocaust Remembrance Day occurs annually, alongside the anniversary of the 1943 Warsaw Ghetto Uprisings, in which Jewish Poles rioted against Nazi occupation and persecution of Jews, according to Haaretz, an Israeli news agency.

Sunday’s event was just one of the numerous Holocaust commemorations occurring around the world at about the same time, Rosin added.

Despite starting around seven to eight years ago, Holocaust Remembrance Day activities at UCLA really began to garner more than just a few students last year, said Rosin, who said she lost several family members to the Holocaust.

“We are not going to just read lists of the deceased as is common these days,” Rosin said. “We want to be able to have students come up and talk to the speakers and share their perspectives.”

Amanda Lazare, a third-year psychology student and member of Bearing Witness, grew up learning how both of her grandparents survived concentration camps in Poland. Her grandmother made it through the Auschwitz camp.

Even though she had been attending Holocaust remembrance activities her entire life, Lazare said she did not fully realize the depth of what her grandparents endured until she was a senior in high school and visited several camps in Poland.

“It really hit me there,” Lazare said.

While she does not see her grandparents often, Lazare said she tries to stay in touch, especially around this time of year.

“I really try to give them a call,” Lazare added. “It’s a very special time to them.”

Rosin said while Holocaust Remembrance Day is an important part of Bearing Witness, the organization’s main program occurs earlier in the year.

Every winter quarter, Bearing Witness sets up weekly lunch meetings between a group of students and Holocaust survivors in the Los Angeles area, Rosin said.

“You get to know them more as people with stories and lives other than just as survivors,” Rosin added.

It provides a connection for students with no direct ties to the Holocaust to gain a more personal perspective, she added.

Margaret Batavia, a fourth-year English student and member of Bearing Witness, said her experiences with a Holocaust survivor through the program encouraged her to be more active with the group.

Since her family moved to the United States before World War I, the realities of the Holocaust were not always easy to see, Batavia said. That was before last year, when she met a Holocaust survivor through Bearing Witness.

“Before the war, (the woman) assumed everything was going to be great, and that she would go to university and marry her high school sweetheart,” Batavia said. “The war changed everything.”

Even after being rescued, the woman contracted typhoid fever that damaged her brain. “(The survivor) couldn’t even go back to school,” Batavia said. “It was too hard.”

The survivor still suffers from crippling panic attacks and could not participate in this year’s program as a result of them, Batavia added.

Rabbi David Gurevich, who lives in the Westwood area, performed the closing ceremony as he sang a song that many Jews reportedly sang as they walked into the gas chambers.

In his experience of similar remembrance days, Gurevich said that over time, the day has become less and less personal as there are fewer people left to tell the story.

In tandem with the event Sunday night, Bearing Witness plans to display an interactive exhibition in Wilson Plaza today from 10 a.m. to 2 p.m., as well as a Shabbat dinner on Friday night.

“Holocaust survivors are a limited resource,” Batavia said. “They’re a connection to the past we won’t have for much longer.”