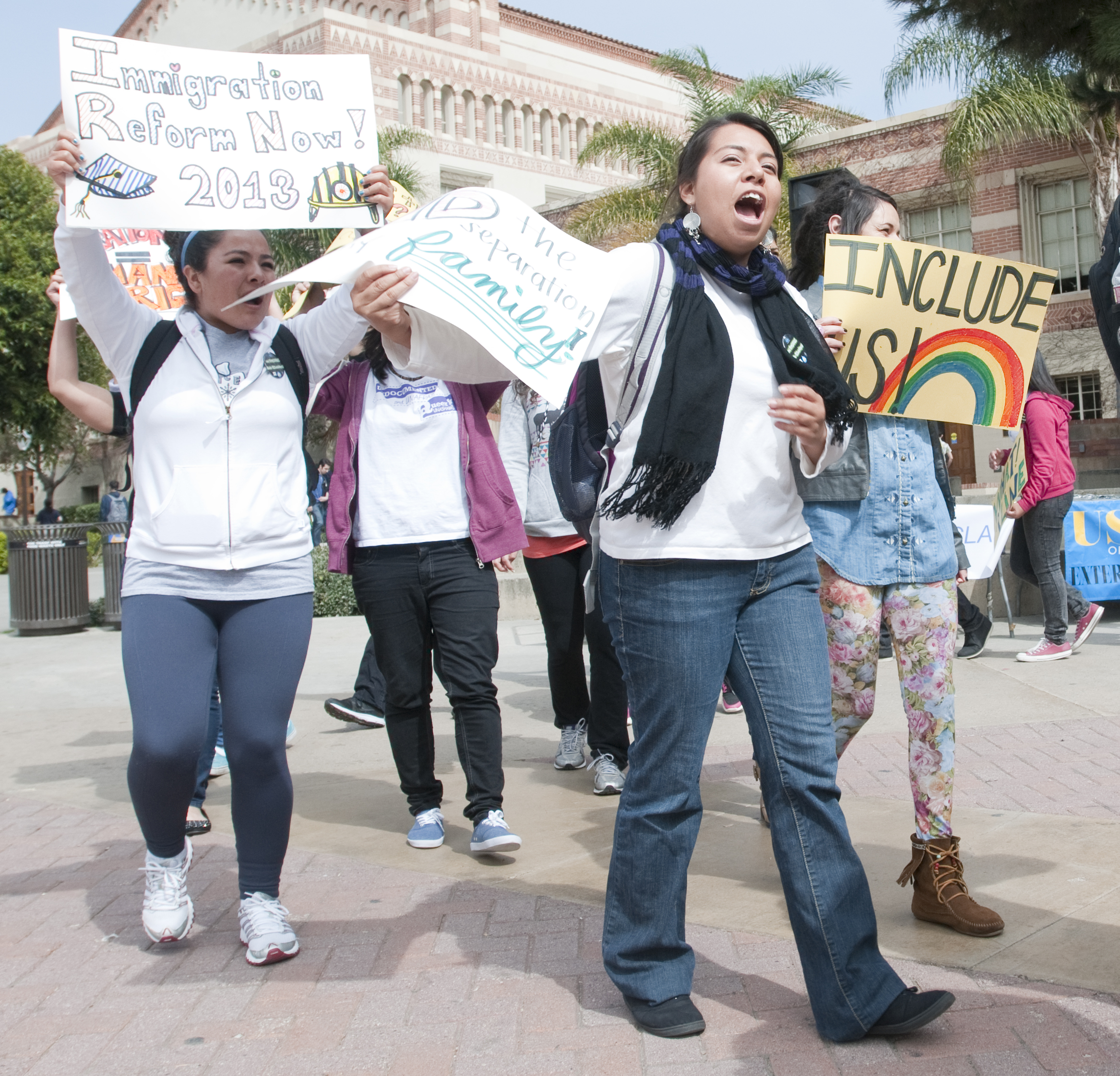 Students rally in Bruin Plaza on Wednesday, as part of the fourth annual Immigrant Awareness Week. The event was held by the student organization IDEAS and the USAC external vice president’s office.

Twelve years after traveling by plane, van and car from his home in Chile to the United States, Mario Pizarro stood nervously at the front of the concrete stage in Bruin Plaza Wednesday and looked out into a crowd of about 50 people.

“I found out I was undocumented when I was in high school and I went to the career center to get a work permit,” said the third-year microbiology, immunology and molecular genetics student to the crowd through a microphone. “They asked me for my social security number, I said I didn’t have one. They asked me if I had a California ID, I said no. So they told me to leave.”

Pizarro was the first of six undergraduate students who publicly announced that they are undocumented individuals during a rally Wednesday, as a part of Immigrant Awareness Week, the fourth annual week of events put on by the student organization Improving Dreams, Equality, Access and Success at UCLA and the Undergraduate Students Association Council external vice president’s office.

The week started off with a film screening about the student movement for immigrants’ rights and will conclude with a panel of community members, students and professors tonight, said Ana Davalos, a second-year philosophy student and assistant director for national affairs in the USAC external vice president’s office.

This is the second year that a part of the week has been dedicated to students “coming out” as undocumented, announcing their status as undocumented to the public, said Carlos Castellanos, a fourth-year political science student and co-chair of IDEAS, who also helped organize the week’s events.

“(The students announcing that they are undocumented) really own that identity, because for the most part, some of our students have lived in the shadows, and it’s time to step out,” Castellanos said. “This event is meant to highlight that.”

Undocumented individuals run the risk of deportation, which is one of the reasons some may be hesitant to publicly announce their undocumented status, said Victor Narro, project director for the UCLA Center for Labor Research and Education and a non-practicing attorney who specializes in immigrants’ rights. Without some type of administrative relief – like deferred action – to defend themselves during legal proceedings, undocumented individuals could be deported by the federal government, Narro added.

The Deferred Action for Childhood Arrivals program started Aug. 15, which President Barack Obama announced in June of last year, allows undocumented individuals who grew up and were educated in the United States a chance for two years free from the possibility of deportation.

The Obama administration and Congress recently came out with proposals for comprehensive immigration reform, both of which plan to expedite the citizenship path for skilled workers and young people who attend college or join the armed forces for a designated period of time.

A black poster board stood in front of the stage in Bruin Plaza Wednesday, on it a hand-drawn tombstone reading “R.I.P. federal DREAM Act 2000-2010,” and underneath, “Now what…”

The board was referencing the federal DREAM Act, which would have provided conditional permanent residency to certain undocumented individuals, but failed in the Senate in 2010.

Narro said he thought the current momentum for immigration reform at the national level came from students like Kryssia Campos, a fifth-year psychobiology student, who came out as undocumented at UCLA on Wednesday.

“I felt the need to put a face to what it means to be undocumented,” she said.

She, her parents and her younger sister came to the United States from El Salvador 10 years ago.

Campos and her family lived in her cousin’s garage in South Central Los Angeles for three years before her parents got stable jobs and moved to Inglewood. She said she thinks the move to the United States was worth it for her because of her education, though she is more concerned for her parents.

“I don’t know if it is worth it for them. They are getting old,” she said. “They can’t get a driver’s license, they can’t get the jobs they want. It’s very hard for them to be undocumented at this age.”

She said she thought the rally was important because the students talked about comprehensive immigration reform, something that could also affect her parents.

Vlad Stoicescu-Ghica, a second-year political science student, spoke at the rally about his struggles as an undocumented student of European descent.

“The first thing you might notice (about me) is I am white – I am Romanian,” said Stoicescu-Ghica, speaking publicly about his status as an undocumented student for the first time.

For his first quarter at UCLA, Stoicescu-Ghica said he had no financial aid. At the time, the California Dream Act – legislation that made undocumented students eligible for Cal Grants and fee waivers from the California Community Colleges Board of Governors – was not law. He said he made it through the quarter with money he got from high school scholarships. He found that there were few scholarships for undocumented students of European descent.

“It hit me, I was running out of money for school and rent,” Stoicescu-Ghica said. He said he had to take quarters off to afford tuition. Now that the California Dream Act has gone into effect, he said he is able to consistently stay at UCLA.

For some students, Wednesday’s rally served as a form of empowerment in what is sometimes a sensitive situation.

“It was a huge relief to me personally when I decided to come out as undocumented,” Pizarro said. “Even though I’m not a legal person here, just saying it out loud made me feel like I was a person.”