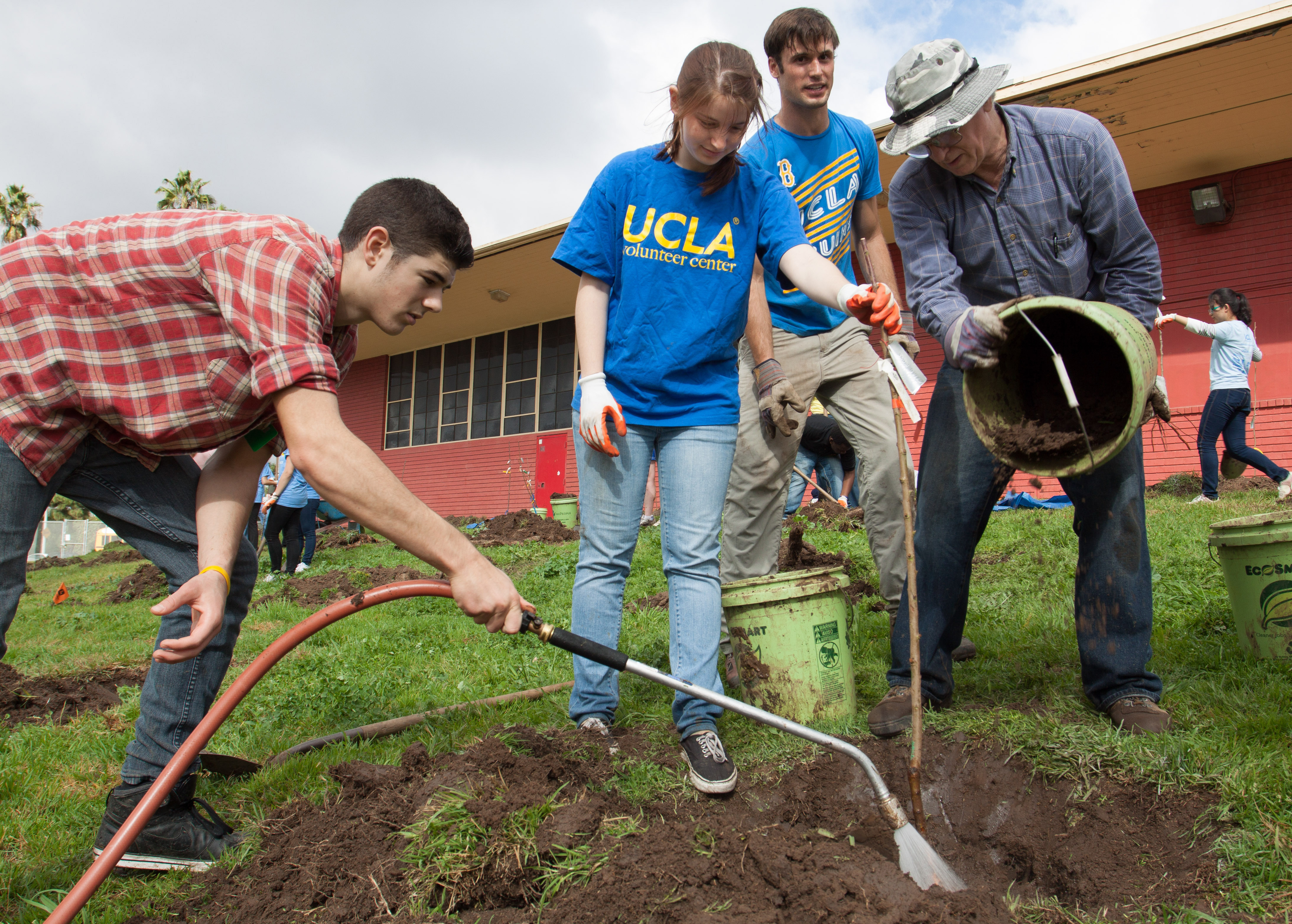 UCLA students work with other Treepeople volunteers to prepare the ground for planting.

On a cool morning in early February, hundreds of Highland Park residents crowded into a blocked-off stretch of York Boulevard, a major thoroughfare for the area. Huddled over steaming cups from the local coffee shops, neighbors chatted excitedly as a marching band performed in the middle of the street.

The scene was a celebration and ribbon-cutting ceremony for the city of Los Angeles’ first parklet, a micropark comprised of two parallel parking spots. As L.A. Councilman José Huizar spoke during the ceremony, he talked about the day as a first step toward reclaiming the streets of Los Angeles for its residents. The day, he said, was about community members coming together to improve the place where they live.

The parklet is one of many new green spaces in the city that have sprouted from the community-oriented tactics being adopted by a new generation of local environmental thinkers. In recent years, Los Angeles has changed the way it tackles environmental issues, experts say. Most solutions used to come top-down, with scientific reports and litigation trying to challenge the sources of the city’s air pollution, but when that approach resulted in limited success, environmentalists instead began trying to institute grassroots efforts to engage everyday people in creating a healthier urban environment.


As activists from UCLA and elsewhere tried to grow their movement – which centers on developing specks of green life within communities by planting trees and building neighborhood parks – they’ve found themselves facing a fair amount of knots. But they’ve also planted the seeds of change.

From the ground up

Since the first Earth Day in 1970, which many see as the beginning of a unified environmental movement, large strides have been made in Los Angeles. For many, taking steps to be green – such as recycling or carpooling – has become a part of everyday life, and it shows in the numbers. There has been significant progress away from the city’s historically congested roads. Since L.A. County began its high-occupancy vehicle program in 1973, for example, it has established more than 500 miles of carpool lanes – 36 percent of the amount in all of California.

But even these efforts have fallen short of addressing Los Angeles’ pollution problems, which come from both its car-centric lifestyle and its uniquely smog-prone geography. Last year, an American Lung Association survey showed Los Angeles has the nation’s highest concentration of ozone and third-highest concentration of airborne particle pollution.

Now, in a revamped effort to “green” Los Angeles, Callahan and others like her are taking a new, bottom-up approach, spurring the people of Los Angeles to take local environmental matters into their own hands. The first step toward facilitating this community engagement, Callahan said, is giving citizens the ability to navigate their neighborhoods without cars.

“We’re looking for ways to have win-win strategies that will both reduce traffic and reduce air pollution, to make our communities more livable, more enjoyable places to be,” Callahan said.

As communities become more enjoyable, experts say they also inspire residents to both enjoy and care about the future of their shared environment.

These benefits can particularly help L.A.’s most urban areas, which tend to be close to pollutant-emitting shipping lanes. This dangerous trend is enhanced by the heat island effect, which causes heavily built-up urban areas to become warmer than their surroundings because of widespread pavement and lack of green space or shade.

“I think we want urban ecosystem services because it’s just a better way to live, at least as much as, ‘Oh, it’s going to reduce 0.5 percent of the carbon,’” said Stephanie Pincetl, director of the California Center for Sustainable Communities at UCLA.

At the recent opening on York Boulevard, residents praised the move toward more pedestrian-accessible streets. Featured in the UCLA Complete Streets Initiative’s 2012 parklet toolkit, which exemplified best practices for designing and creating the spaces, Highland Park’s new addition offers residents aesthetic appeal, as well as a convenient place to meet.

Linda Kennedy, a longtime local resident, said the parklet is only the most recent in a series of renovations over the last five years. As she watched her child play on the new structure, she noted that the residents and businesses alike already seemed energized by the meeting place.

“I hope this will give people a reason to come sit outside,” she said, adding that a park soon to be opened down the street is likely to help bring even more community members outside.

“I think it’s going to be a great place for people to come together to eat our Scoops and drink our Cafe de Leche (local restaurants).”

The parklets, with their emphasis on neighborhood engagement rather than strictly green space, also address an issue Pincetl said has been overlooked at times when planning “greening” efforts. In the past, experts say “greening” efforts to plant more trees in the city have failed because of lack of community engagement in the planning and execution process.

“L.A. has a legacy of planting trees that have created issues,” said Torin Dunnavant, senior manager of community engagement for Treepeople, a local nonprofit which focuses on urban ecology.

“If you’re going to plant a sycamore, which will grow to a radius of 30 feet, you can’t plant it right next to this building. Why not plant a tree whose limbs aren’t going to be as invasive? You have to work with the community to choose.”

Los Angeles has a dry climate, which is only going to become more so as temperatures continue to climb – a fact that makes urban forestry efforts even more difficult. Dunnavant said poor plant selection for the L.A. environment, as well as an ever-shrinking city budget for the maintenance of public spaces, has meant that many of the trees planted as part of urban “greening” efforts in the past have ultimately died.

This lack of forethought in plant selection is part of the reason the Million Tree L.A. initiative, a campaign launched with Mayor Villaraigosa’s election in 2006, faltered a few years in. According to Pincetl, the initiative’s downfall was rooted in “a desire to plant trees with very little actual science about the benefits of tree planting.”

The program was launched with lofty goals, including huge monetary and energy savings, but Pincetl said giving people trees can often become more of a burden than an asset for L.A.’s underserved communities.

“If we’re going to be talking about doing these things well, it becomes kind of an environmental justice thing, perversely,” she said. “Why should, in low-income neighborhoods, residents be expected to maintain the trees, while we know very well that in high-income neighborhoods, they will have mow-and-blow people that will come in and take care of the trees?”

In hopes of avoiding the same pitfalls as the Million Tree L.A. initiative, the city reached out to several nonprofits and local residents when it commenced its next big project – the 50 Parks Initiative.

Dunnavant said Treepeople focused on helping the city select and plant trees that would persevere with minimal care in a city with a slashed maintenance budget and a large deficit.

With more than 30 years of encouraging tree planting, Dunnavant said Treepeople has found that the key to keeping trees alive is teaching residents how to care for them.

At first, Treepeople’s instruction focused on taking care of the trees when they were first planted, rather than education on long-term care – a decision that left residents unprepared for the challenges their trees presented over time.

For Treepeople, at least, a few key modifications have helped them increase both client satisfaction and long-term health of the trees. Among the most crucial changes were programs offered in Spanish and the ability for community members to have a greater say in the planning stage of projects.

Now, Dunnavant said, his “green teams” of everyday citizens are even able to maintain or “adopt” trees planted by other organizations.

“We’re getting to the point where we have communities that are completely self-sustaining,” he said. “Eventually it just becomes, ‘Hey, we need to show up and borrow your shovels.’”

At a recent fruit tree distribution at Morningside High School in Inglewood, Calif., Treepeople took another step toward developing these self-sustaining communities. Throughout the day, lines for the event remained in the hundreds as families cycled through to choose their trees, learn how to care for them, and learn about the benefits of urban forestry.

Classes were packed throughout the day, with newcomers learning the basics of tree planting and care, and many returning clients taking classes on everything from nutrition to advanced tree care. Children ran around the event grasping young tree trunks and translating eagerly for parents.

Ethel Alexander, a community organizer in the area and a longtime Treepeople volunteer, said these classes often teach people more than just the specifics of tree care.

“(We’re) helping to educate people about the benefits of having more trees in their neighborhood,” she said. “You’ve got fruit, which is a food source, and it attracts wildlife and makes the whole place more park-like and hopefully more serene.”

These communities’ benefits are also what inspired D’Artagnan Scorza, founder of the Black Male Youth Academy at Morningside High and a doctoral candidate in education at UCLA, to help coordinate the event.

Teenagers in his program helped throughout the day, managing crowds and helping carry trees for those who were unable to. For Scorza, it is this high level of youth engagement that holds the most promise.

“That’s what you see here today: These are our youth who got out and said we need to be about something different,” he said. “People in our community want access to healthy food, but also there’s this desire to be in charge of their own destiny, their own futures.”

And while the young people involved in Scorza’s program are already committed to affecting these changes, Dunnavant said he hopes this knowledge and interest can spread to the general community.

“Trees are a gateway drug because people have this intrinsic recognition that trees are important,” he said. “They help with harvesting rainwater (and) alleviating storm water. They save us energy by providing shade. It gets people thinking, ‘Maybe I should be a little more conscious about these things.’”

With so many groups making individual progress in different communities and different areas of sustainability, Los Angeles’ environmental activists started to bemoan the lack of cohesive central planning for the growing movement.

Coalition efforts – like Treepeople’s work with the city, Callahan’s work with Los Angeles Sustainability Collaborative, and Pincetl’s work with the California Center for Sustainable Communities at UCLA – have become increasingly common as groups realize the increased power of coordinated efforts.

“Think about things holistically – that’s what the environmental movement is doing now and needs to do more of,” Callahan said. “Instead of pigeonholing different issues, it’s ‘how do we address multiple issues at once?’”

Pincetl cautioned that more concerted efforts like these are necessary if Los Angeles hopes to successfully change its unsustainable culture.

“I have to say on the one hand, I really admire all that’s been done – it’s really, really opportunistic,” Pincetl said, adding that she admires the ability of researchers to find diverse funding sources for different projects most.

“But it’s a hodgepodge – it’s like buckshot across the landscape.”

And for a landscape as large as that of Los Angeles, environmentalists say it will take more than buckshot to leave a lasting mark.