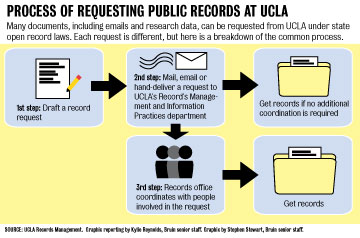 More than a decade ago, UCLA began receiving sizable record requests related to her research.

The requests asked for descriptions of research grants. Then medical records.

It wasn’t until more than five years ago – when groups against animal research requested five to 10 years of autopsy records for monkeys she researched – that Lynn Fairbanks went to the university to put a stop to the release of the records. The UCLA psychiatry and biobehavioral sciences professor, who has worked with vervet monkeys for nearly 40 years, felt the records were being used to manipulate her research negatively.

“When this whole thing started, the university was just following the open policy without any kind of prior knowledge about how it would be used and misused,” Fairbanks said.

A growing number of these academic research requests at UCLA and other universities in recent years is the focus of an Academic Senate committee, which is developing recommendations for faculty about how to better protect their research and electronic communication from public record requests.

In December 2011, University administration asked faculty members in a letter to serve on the committee, named the Administration-Senate Academic Freedom Task Force. The task force is responsible for preparing Chancellor Gene Block and faculty on how to respond to record requests that could infringe on academic freedom – or the right to intellectual independence and scholarly communication – at the university, according to the letter.

“The administration recognized that its professors were at risk of having their academic freedom compromised because of unreasonable (Public Record Act) and (Freedom of Information Act) requests,” said David Teplow, a professor of neurology and co-chair of the task force.

The task force was asked to reiterate the values of academic freedom and assessing the university’s obligation to those values, and creating guidelines for faculty about protecting their electronic communications. It was also asked to identify which campus members should be involved when issues with records requests arise.

As academic record requests become more common, the process of requesting records has drawn concerns across academia about where academic freedom should end and the freedom of information should start.

As a public university, UCLA is subject to the California Public Records Act. Certain emails, research grants and data are among the documents that can be requested.

Academic research requests are often made to increase transparency about the research process or relationships between faculty and other groups.

But many requests can be used to achieve political goals, such as delaying faculty from doing research that the person or group requesting the records disagrees with, Teplow said.

“If you published a paper and I didn’t like what you said … I would bombard you with (Public Record Act) or (Freedom of Information Act) requests regarding your research,” he said. “I would ask for everything: ask for all email communications, ask for all phone transcripts, all photographs.”

The records related to Fairbanks and other UCLA faculty members who conduct animal research were often posted online. A judge ruled in 2011 that the university is not required to release certain records regarding animal research, including detailed protocols, because it could place researchers and their families at risk of intimidation and violence by groups against animal research, according to a UCLA statement.

The use of technology to communicate and conduct research has opened up universities to an increase in requests for faculty documents in recent years.

For example, the University of Virginia faced a number of widely publicized record requests for documents related to faculty climate research. In a recent case, the public university withheld thousands of emails in a request for documents related to the research of renowned climate scientist Michael Mann during his time as a faculty member at the school. A judge ruled in September 2012 that the scientist’s emails were exempt from the state’s Freedom of Information Act because of a scholarly research exclusion in the law.

UCLA’s Records Management and Information Practices department, which handles all records requests that come in for the university, has seen an exponential increase in requests at UCLA. It does not, however, keep track of the types of requests it receives, said Allison Baird-James, associate vice chancellor of corporate financial services, in an email.

Some academic research requests have raised questions across universities about whether or not requests can limit academic freedom – described by UCLA’s Academic Senate as the “freedom from duress or sanction aimed at suppressing the intellectual independence, free investigation, and unfettered communication by the academic community” in a statement drafted in 1984.

To fulfill an academic research request, faculty take time from teaching, researching or treating patients to gather and review records, Baird-James said. Some record requests can have more than 10,000 documents that fit the requirement, she said. The Records Management and Information Practices department does not keep track of how long it takes to fulfill each request.

“What that does is put an unreasonable burden on the individual if these (Public Record Act) or (Freedom of Information Act) requests are granted,” Teplow said.

The possibility of receiving requests can decrease collaboration among researchers.

Professors may choose to change their communication – or not communicate at all – with colleagues over email, because those are documents that can be requested in the future, said Christopher Kelty, an associate professor in the Institute for Society and Genetics and a member of the task force. This change could decrease frank and open scholarly discussions, he said.

Additionally, faculty at private schools – who are not subject to public record laws – may choose not to work with UCLA faculty because their communication and research could be requested under open record laws, Teplow said.

And another impact of these record requests is the potential limit on faculty’s academic freedom to decide when and if to disseminate their work, Teplow said.

Kelty, whose research involves copyright infringement and piracy in his joint appointment in the Department of Information Studies, said he considers what he wants “exposed to the world” when he is working.

“I feel as an academic I have the right to say what I want to say… But (records requests are a) concern,” he said.

In an August 2012 document titled “Statement on the Principles of Scholarly Research and Public Records Requests,” the task force concluded that record requests can “damage intellectual freedom and interfere with robust scholarly communication.” It added that record requests should not replace the “time-honored and rigorous process of peer-review.”

But teaching university faculty how to protect certain research from public record requests questions the purpose of federal and state open record laws: public access to information and transparency.

David Greene – a lawyer, professor and former executive director of the California-based free speech nonprofit organization First Amendment Project – said he understands there are reasons for faculty to protect research or communication in certain cases. At the same time, however, he said these recommendations should not shield faculty from accountability.

Professors should expect their data and communication will be made public, and privacy invasion is often not a strong enough reason to protect documents from record requests, he said.

Requests at universities have helped uncover inaccurate research or data in the past, he added.

Fairbanks, the UCLA psychiatry and biobehavioral sciences professor, said she believes in transparency – the university should not cover anything up. It is how certain record requests are used against researchers that she takes issue with.

“Some (researchers) are slightly negligent,” Fairbanks said. “We want to be able to root that out (with record requests).”

Teplow noted that the committee’s members do not think open record laws are bad in principle.

“We think that transparency can be quite useful,” he said. “It allows the public and other scientists and researchers, for example, to ascertain whether research that is done is true or not.”

He said the task force is addressing the issue of when it is appropriate and inappropriate to request academic research records, but he could not provide any specifics about what consideration for freedom of information the committee has taken into account when creating their recommendations.

Status of the task force

The task force recently met to work on the final documents it is putting together for the university. It already drafted a paper outlining the relationship between public record requests and UCLA’s mission of academic freedom, which was sent out to members of the campus
community for feedback, Teplow said.

The committee cannot provide specifics about its recommendations until the final documents are given to the administration, Teplow said. The administration declined to comment on how it would specifically use the information.

Beyond the final recommendations for the administration, Teplow said the task force is working to create a way for UCLA faculty to learn what they can do in the case they receive an academic research request. Plans have not been finalized, but the committee is hoping to have more specific information in the next few months, he said.