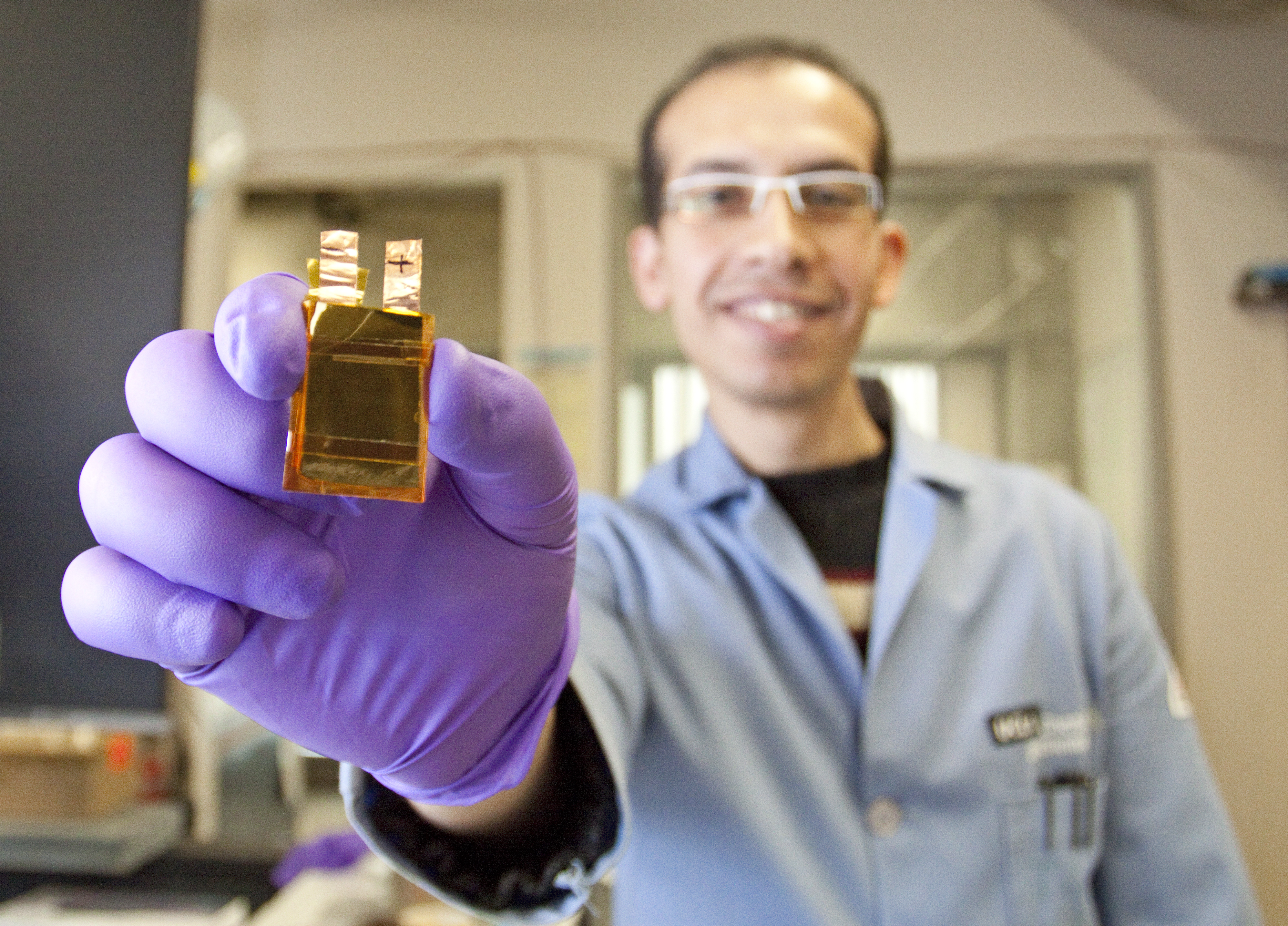 Maher El-Kady, a graduate student in biochemistry and chemistry, has been working with chemistry professor Richard Kaner to develop a large-scale method for the production of graphene-based supercapacitors, which he said could replace contemporary batteries.

After hurrying back to his lab in South Campus, he powered the lamp for more than five minutes by charging thin gray-colored sheets of flexible semi-metal for just a few seconds. His hunch was true – the sheets could work as a replacement for batteries.

Immediately, the graduate student in chemistry and biochemistry called Richard Kaner, professor in the Department of Chemistry and Biochemistry as well as the Department of Materials Science and Engineering. The two had been working to develop a large-scale method for the production of graphene-based supercapacitors, a battery-like charged storage device that El-Kady said could replace the batteries used today.

If the product is introduced into the market, people would be able to charge their phones fully in just ten minutes and would not have to change their laptop batteries every three years.

“The special thing about (supercapacitors) is that it resonates with the public; everyone can relate to it,” said Kaner, who is the principal investigator in the study.

Unlike the average battery, which is made of lithium, a graphene-based supercapacitor can be charged and recharged one million times, Kaner said. It charges quickly, and is inexpensive and easy to manufacture, he added.

Graphene is the thinnest, strongest material on Earth, with a high-rate of electron transfer – properties ideal for a superbattery. The graphene-based supercapacitor charges 100,000 times faster than regular batteries and is biodegradable.

El-Kady, the lead author of the study, began working with the compound graphene in 2010.

Originally, the team was working to manufacture graphene on a large scale. But when El-Kady saw the potential for graphene’s use as a battery, he and Kaner shifted their focus.

To produce graphene, the researchers coat a layer of graphite oxide, a compound containing carbon, hydrogen and oxygen, on a disc and allow it to dry. Then they place the disc in a DVD label-burning drive from the company LightScribe, software that etches labels onto CDs and DVDs directly. When the laser in the drive hits graphite oxide, the compound is converted to graphene, which can be cut to emulate the shape of a battery-like coin cell used in watches.

El-Kady received the Herbert Newby McCoy Award in 2012 – the highest form of recognition from UCLA’s Department of Chemistry – for the breakthrough.

El-Kady and Kaner recently began talking to a company to commercialize the product and bring it to the market. The researchers plan to introduce it to consumers within the next two years, Kaner said.

Electric cars are often expensive, and may not always give a good return for consumers because the technology used to power the cars is costly and not as efficient in terms of mileage, said Sanjog Misra, professor of marketing at the UCLA Anderson School of Management. If the technology in electric cars improved, and people could plug in their cars and charge them up for miles in a few minutes – using the graphene-based supercapacitors – then there could be a significant impact on the electric-car market.

“Price would be an important determinant, but it will be exciting if the technology scales,” Misra said.

El-Kady said he thinks the supercapacitor breakthrough was possible because of the combination of different skill sets at UCLA.

Kaner and El-Kady met via video conference in 2008, when El-Kady was pursuing his masters degree in chemistry at Cairo University in Egypt. Kaner, who was teaching at UCLA at the time, read El-Kady’s thesis about electrochemistry and said he was impressed by El-Kady’s research. He later invited El-Kady to pursue a doctoral degree at UCLA.

He said working with Kaner has motivated him to find practical uses for his background in eletrochemistry.

“Richard Kaner is a very interesting professor,” El-Kady said. “He always encourages us to not just make materials, but try and make something useful and beneficial to society.”