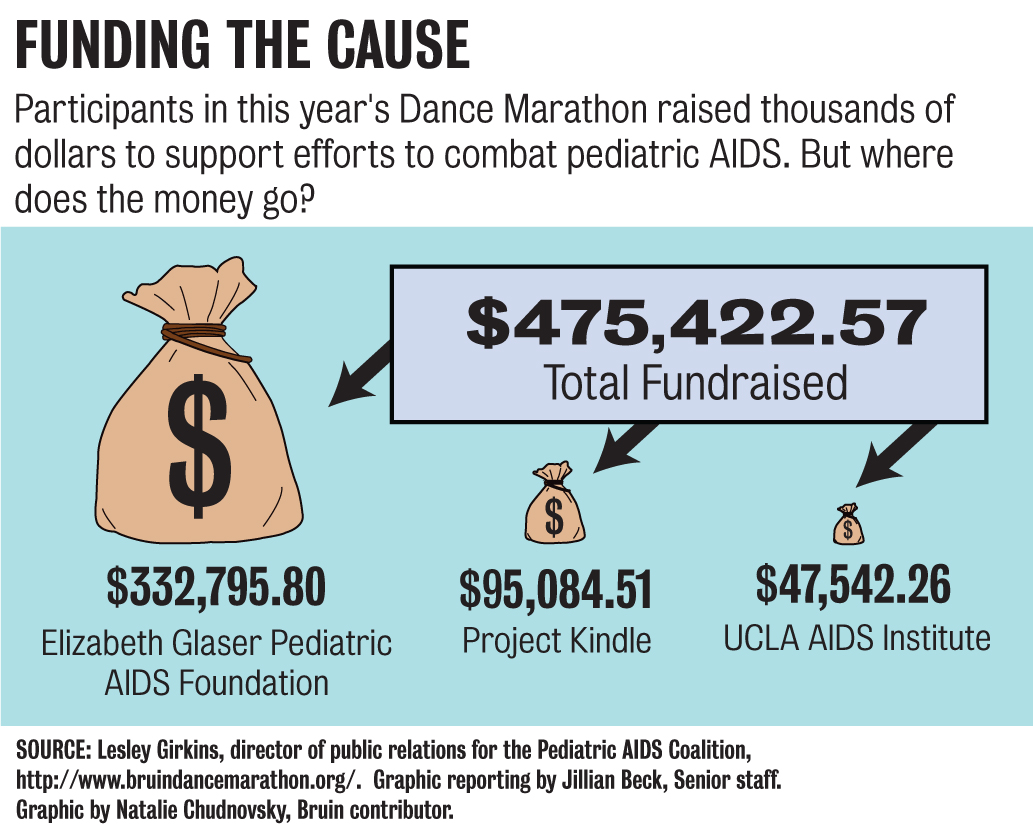 In the town where Erin FitzGerald grew up in Iowa, her dad’s condition had to remain a secret – he was HIV positive.

The only time FitzGerald could openly talk about her doubts and fears related to the disease was at a camp put on by Project Kindle, one of the organizations that benefits from UCLA’s Dance Marathon, an annual event organized by the Pediatric AIDS Coalition at UCLA where participants dance for 26 straight hours to raise money for HIV-affected children.

This year’s event raised $475,422.57, which will be split between Project Kindle, the UCLA AIDS Institute and the Elizabeth Glaser Pediatric AIDS Foundation – 20 percent, 10 percent and 70 percent, respectively.

“We chose these beneficiaries because we wanted to make sure (to prevent) pediatric AIDS locally, globally and (focus on) the future,” said Lesley Girkins, director of public relations for the Pediatric AIDS Coalition at UCLA.

FitzGerald, who was at Dance Marathon over the weekend, first went to Camp Kindle when she was 10 years old. Now, 15 years later, she is the program coordinator for Project Kindle, leading the events she participated in as a child.

“Going to Camp Kindle opened a discussion about the disease in my home,” FitzGerald said. “We were able to talk about it as a family, (it was no longer) taboo.”

The money from Dance Marathon goes to support the California camp and the SPEAK OUT program, in which Project Kindle participants go to schools to educate students about HIV, said Eva Payne, Project Kindle’s founder and executive director.

“(The children) love seeing thousands of students saying ‘We love you, we support you,’” Payne said.

Some women do not know whether or not they have HIV and accidentally transmit it to their children at birth – one of the guiding motivators of the Elizabeth Glaser Pediatric AIDS Foundation, which receives the largest share from the funds raised by Dance Marathon, said Jane Coaston, a spokeswoman for the organization.

Elizabeth Glaser was infected with HIV by a blood transfusion. Unknowingly, she transmitted the virus to both her children, Ariel and Jake Glaser. At the time, there was no treatment for children with HIV. After Ariel Glaser’s death, Elizabeth Glaser decided to create a foundation to raise money for pediatric AIDS research.

The goals of the Elizabeth Glaser Pediatric AIDS Foundation are to educate women about how HIV is transmitted, to stop the spread of pediatric AIDS and to prevent HIV infections, Coaston said.

The foundation does advocacy work in the United States and uses the money raised through Dance Marathon to support researchers, pay for treatment for children and toddlers, and fund the more than 5,000 facilities that provide assistance to women and children around the world – mostly in African countries and in India, Coaston said.

Just before the fundraising total was announced Sunday afternoon, Jake Glaser took the stage to tell the participants his story and how the money would help children affected by HIV/AIDS.

“We’re here to ensure that children have a possibility to live an HIV free life,” Jake Glaser said to the crowd. “It’s our generation, it’s our turn. We can make an AIDS-free world a reality. I have no doubt that we can do it.”

Correction: There currently is no HIV vaccine. The Elizabeth Glaser Pediatric AIDS Foundation puts some money raised through Dance Marathon to pay for treatment for children and toddlers.