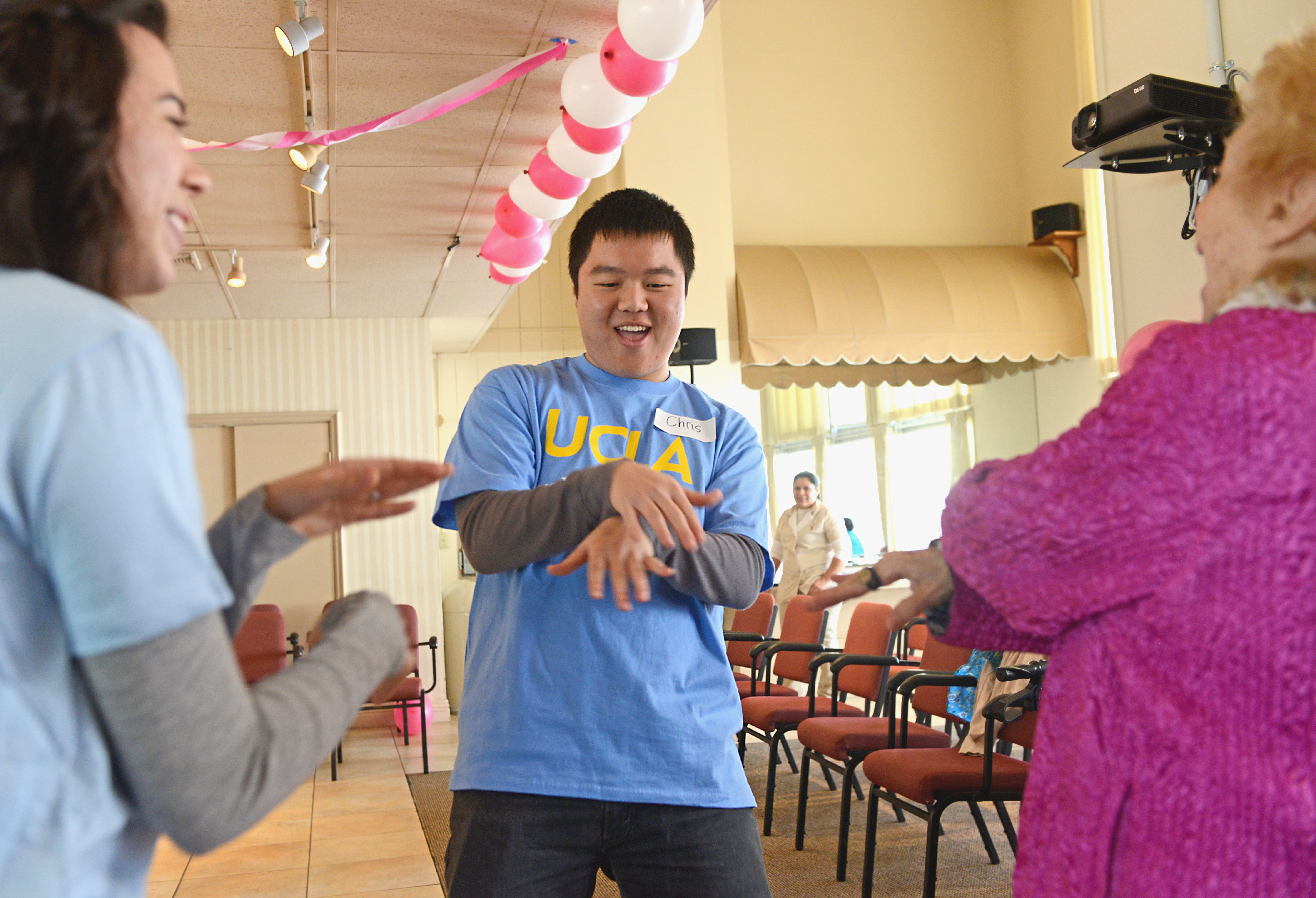 Pink and white balloons and ribbons hung from the ceiling of a conference room at Vintage Westwood Horizons on Saturday morning, as rock ‘n’ roll music started to play. The room was almost empty, but slowly some of the retirement community’s residents joined UCLA volunteers in a Valentine’s Day-themed dance.

They twisted. They clapped. They sang along to songs like “Cha-Cha Slide” and “La Bamba” until the room filled up with a few dozen residents and volunteers.

The Valentine’s dance was part of the program “Two Feet, One Cause,” a UCLA Volunteer Center event similar to the center’s “One Bus, One Cause,” where UCLA students volunteer in different parts of Los Angeles.

The purpose of the new event was to show students that help is something that can be done close to UCLA, said Rachelle Gonzales, head project leader and a third-year microbiology, immunology and molecular genetics student.

About 40 student and alumni volunteers met at Ackerman Turnaround and walked to Vintage Westwood Horizons, located near the corner of Tiverton and Le Conte avenues, to spend most of Saturday getting the residents in the Valentine’s Day spirit.

“The reason why  we chose (to go to Vintage Westwood Horizons) is because a lot of seniors get lonely,” Gonzales said. “They are a great population to reach out to by giving them love (especially) through Valentine’s Day.”

About 200 seniors, most of them in their 80s and 90s, live at the retirement center, which organizes daily activities such as bingo and poker, said Leah Manoff, Vintage Westwood Horizons’ business manager. The building used to be a UCLA dorm but was converted to a retirement community in 1973.

The morning sun heated up the patio as the volunteers and residents sipped coffee, played board games and did Valentine’s Day-themed arts and crafts together. The volunteers also taught the residents how to use technology, like cell phones and computers, to keep in touch with their families.

Sitting together in small groups around tables, they conversed about college, their routines, relationships and love.

“They had been married for (73) years,” she said. “It was interesting to hear them talk about their travelling and their relationship.”

Kimia Shahi, a UCLA alumna and one of the volunteers, said she also enjoyed hearing the residents’ stories. Her favorite came from a couple who met at the retirement community.

“He was telling us their story (and) he said, ‘She was unattached, I was unattached and then we got attached,’” Shahi said, smiling.

Love seemed to be in the air at the retirement community.

Joe Byers, 89, and Cristina Happner, 65, met there about a year ago playing a card game called cribbage.

“What I like the most about this place is Joe,” Happner said, smiling at Byers.

“And I like Cris,” Byers said, while placing his hand on her knee.

For Valentine’s Day, Byers and Happner said they plan to go to a candlelight dinner that the retirement community is organizing.

During the ball – the last event of the day – Esther Zembow, 86, taught some students how to dance to “The Twist” and encouraged other residents to not be shy and join in.

“Dancing is a nice outlet, you can be any age and still dance”, said Zembow, while tapping her feet to the beat.

As the day came to a close, the music switched from upbeat rock ‘n’ roll to the slow ballad “Love me Tender.”

While some couples, volunteers and residents danced, others walked around the room handing out plastic flowers and Valentine’s Day cards.

“Someone is thinking of you at UCLA,” one of the cards read.