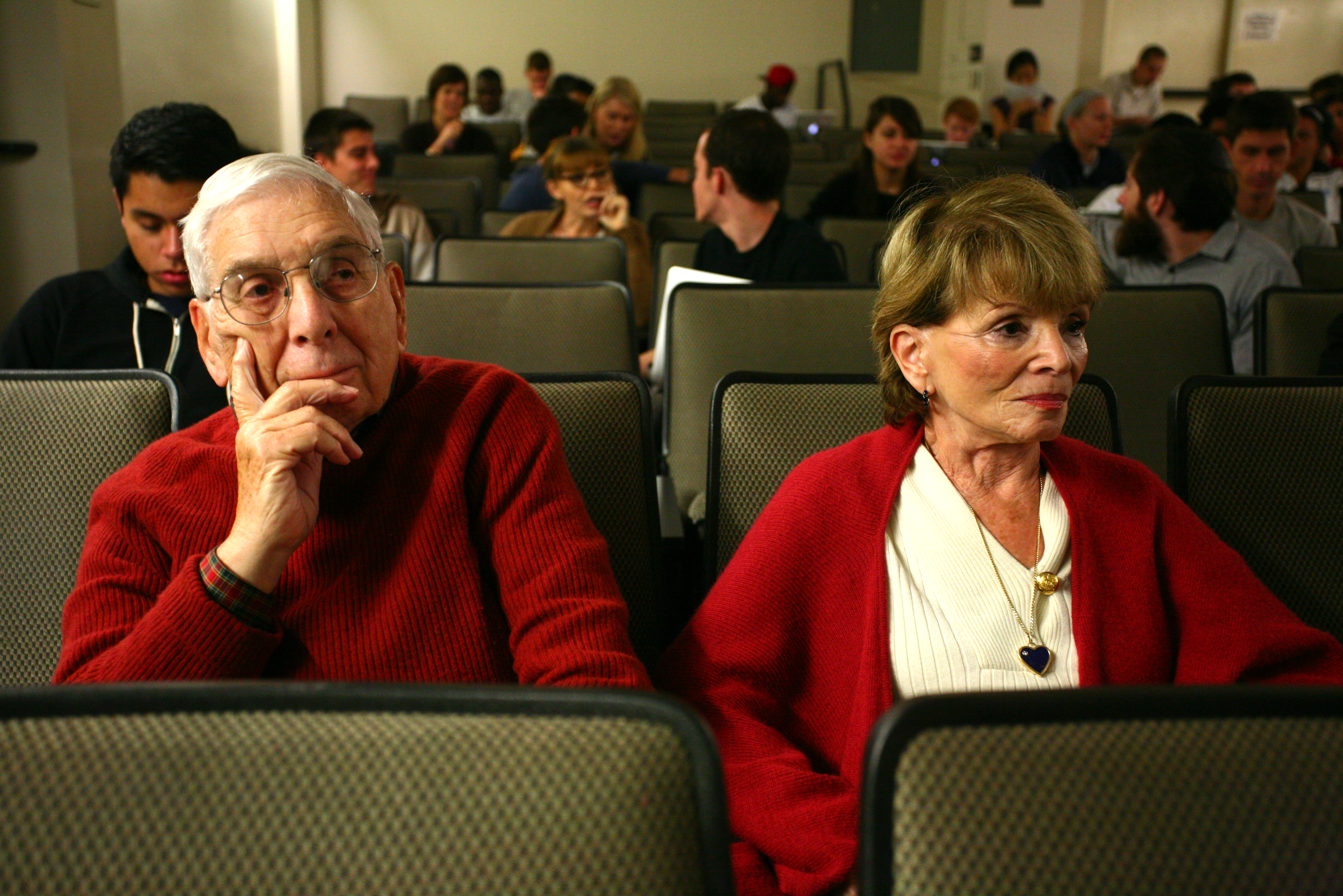 Peter and Barbara Rothholz, 83 and 79 years old, respectively, have been auditing classes at UCLA for many years. This quarter, they are taking an upper-division history course called “Jazz and the Political Imagination.”

A couple sits in Perloff 1102, attentive and near the front of the lecture hall as a professor describes the relationship between jazz musicians and the Watts Riots of 1965.

Surrounded by undergraduate students in their late teen years or early 20s, the man and woman stand out with his white hair and their matching red sweaters.

Peter and Barbara Rothholz are 83 and 79 years old, respectively. The couple is auditing ““ sitting in on a class without enrolling or completing assignments or tests ““ the upper-division history course called “Jazz and the Political Imagination” this quarter.

“I’m fascinated by learning,” Barbara Rothholz said. “For instance, today there was a whole different approach to an old subject. It opens our minds.”

The husband and wife found out about the opportunity to audit classes after joining the Peer-Led Learning and Teaching in Osher program, which is part of the Osher Lifelong Learning Institute. The program, offered through UCLA Extension, is designed for older adults, who lead and participate in discussion groups, said Dylan Wright, a program representative for the Osher Lifelong Learning Institute.

Anyone can audit UCLA classes for free with the instructor’s consent, said UCLA Registrar Frank Wada. The UCLA Registrar’s Office does not collect records of how many people are currently auditing classes or have done so in the past, he added.

Peter Rothholz said only once has a professor not allowed him to audit the class.

“I always talk to the professor to check if I can ask questions, if he is OK with it,” Peter Rothholz said.

Robin D.G. Kelley, a history professor who allowed the Rothholzes to audit his jazz course this quarter, said in his 25 years of teaching ““ two at UCLA Â­”“ he has always encouraged and invited people to sit in on his classes.

Kelley, who specializes in United States history, said he likes that the Rothholzes add to the classroom environment, frequently contributing thoughts and questions.

“They have memories. They are curious,” he said. “They have something to contribute (to the course).”

Barbara Rothholz said she wants to go even further with her questions, but sometimes feels inhibited because she doesn’t feel it’s her and her husband’s place to do so.

Kelley said the couple’s presence does change the dynamic in the lecture hall.

“People have to be more respectful (with them in the room) ““ at least pretend they aren’t sleeping,” he said, laughing.

One of the couple’s classmates, Javier MuÃ±oz, a fourth-year history student, said whenever he saw older people in previous classes, he wondered why they were there.

MuÃ±oz said he considers taking classes with older people, like the Rothholzes, to be a good experience.

“We learn from them because often they’re the only ones that remember the event the professor is talking about,” he said.

In their two years of auditing courses at UCLA together, Peter and Barbara Rothholz have taken three courses, from post-war German film to musical theater. While he has been auditing classes for almost a decade, she just joined him last year.

She said she tends to stick to courses her husband chooses to audit to spend more time with him.

The couple met when Peter Rothholz moved from England to New York City, when World War II ended, he said. At the time, he was 15 years old and she was 12, but they still remember the day clearly.

“I remember that day so perfectly, even the furniture in the apartment, because he left such an impression on me,” she said. “I remember saying to my friend, “˜he’s such a snob,'” she said, laughing.

The two lived their own lives and met again in 1967, each having gone through a separate divorce. Within four years, they were married to each other.

Now, 41 years later, the retired couple alternates between a home in East Hampton, N.Y., and a home in Santa Monica, depending on the season.

They hope to sell their home in East Hampton and eventually move to Los Angeles for good.

“You have a couple who have to travel to UCLA, walk all the way across campus ““ they’re getting up there in age ““ but they never miss a class,” Kelley said. “They’ve done this before. They are lifelong learners.”

Correction: Peter and Barbara Rothholz found out about the opportunity to audit classes after joining the Peer-Led Learning and Teaching in Osher program, which is part of the Osher Lifelong Learning Institute. The program, offered through UCLA Extension, is designed for older adults, who lead and participate in discussion groups, said Dylan Wright, a program representative for the Osher Lifelong Learning Institute.