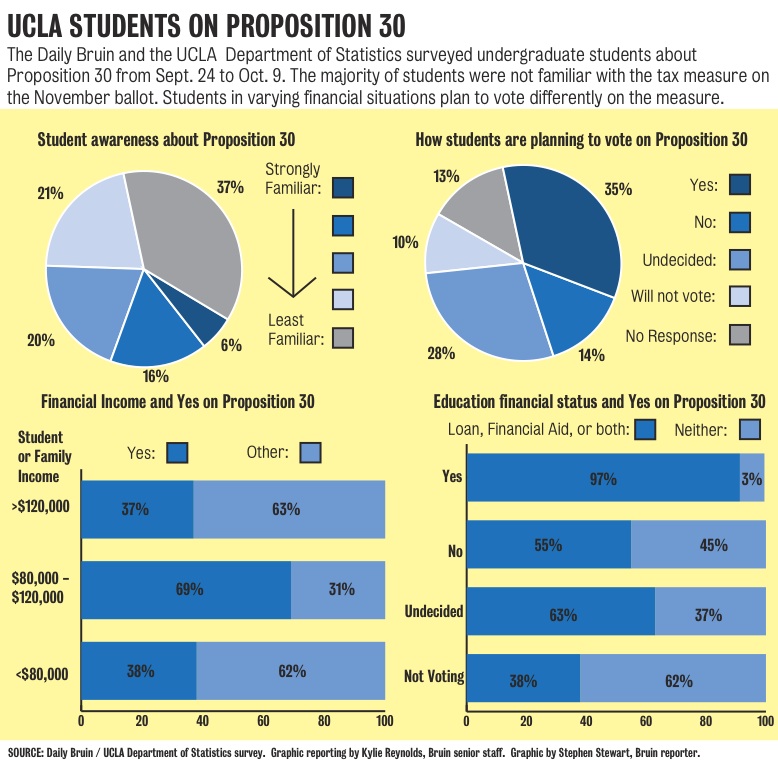 The Daily Bruin collaborated with the UCLA Department of Statistics to gauge the political climate on campus during the 2012 election season.

An anonymous online survey was emailed to 8,000 undergraduates through the UCLA Registrar's Office, which students could fill out between Sept. 24 and Oct. 9. The survey received 718 responses "“ a 9 percent response rate. While low, the responses matched UCLA student demographics and are an accurate indicator of the campus. The margin of error for the survey overall is 4.1 percent.

Students in the UCLA Statistics course 140SL, which is about statistical consulting, analyzed the responses to the survey. This week, the Daily Bruin will be releasing articles based on these analyses.

Any questions about the survey can be addressed to [email protected]

By Sonali Kohli and Andra Lim

The original graphic accompanying this article contained several errors and has been changed. See the bottom of the article for additional information.

A majority of UCLA students polled said they were not familiar with Proposition 30, a ballot measure that will determine some University of California funding, according to a Daily Bruin/UCLA Department of Statistics survey conducted between Sept. 24 and Oct. 9.

Only 35 percent of the undergraduate students surveyed said they would vote for Proposition 30, Gov. Jerry Brown’s tax measure, on the November ballot, which recent statewide polls show is dipping below 50 percent approval among likely voters.

The Yes on Prop 30 campaign assumed students would overwhelmingly support the proposition if they were aware of its impact on the UC, said Dan Newman, a spokesman for the campaign. The student vote is crucial for the measure to pass, especially given the low statewide polling numbers, Newman said.

Proposition 30 was labeled as a tax to fund K-12 schools because polls show that voters strongly support state spending in that area ““ but now, the campaign is “scrambling” to get other voters, including those in the UC, said Daniel Mitchell, a professor emeritus of the UCLA Luskin School of Public Affairs and the UCLA Anderson School of Management.

“(The campaign is) now looking for any other sources of support,” Mitchell said.

Proposition 30 would temporarily increase taxes for high-income households and raise the sales tax to fund K-12 education and community colleges. That would free up state funds for other public institutions, such as the UC.

The UC also accepted a proposal from Brown in July ““ if the measure does pass and the University freezes tuition this year, the state will allocate $125 million to the UC in 2013-2014.

If the measure does not pass, the UC will lose $250 million, likely resulting in double-digit tuition hikes this academic year.

Of the students surveyed who are planning to vote for the measure, 96.6 percent said they receive loans, financial aid or a combination of both.

The measure’s opponents criticize it as a band-aid solution that will not help the UC in the long run. Opponents say that the taxes Proposition 30 raises will expire after several years, and that the measure does not guarantee substantial funding for the UC beyond the next two years.

“I just want to see how in the long-term California plans to fund universities,” said Darren Ramalho, chair of Bruin Republicans.

Many Bruin Republicans have questioned the sustainability of the measure, but the club will not take a stance on the proposition because not all members are against the initiative, added Ramalho, a third-year English and political science student.

It may be hard to educate students about Proposition 30 because the text of the ballot measure does not mention the UC, said Kimberly Nalder, an associate professor of government at California State University Sacramento and the director of the Project for an Informed Electorate.

Yvonne Winer, a first-year international development studies student who helped register voters on Bruin Walk last week, said she has read the proposition and was confused by it.

“If the whole document doesn’t use the word “˜tuition,’ I don’t understand (how it helps the UC),” Winer said.

She said she plans on familiarizing herself more with the propositions before election day.

In general, college students in California can be a difficult demographic to reach.

Voter turnout is traditionally low among students, and that trend is likely to continue this year, Newman said. There is less incentive for students to vote because President Barack Obama and Sen. Dianne Feinstein (D-Calif.) are guaranteed to win their elections in California, Newman said.

Since the Daily Bruin/UCLA Department of Statistics survey was completed, efforts to bring students to cast a vote on Proposition 30 have increased. Brown has visited several UCs, including UCLA, to encourage students to vote for Proposition 30, and UCLA Chancellor Gene Block recently sent an email to students pushing them to “cast an informed vote.”

On a systemwide level, UC President Mark Yudof, who first voiced support for the measure at the Board of Regents’ March meeting, issued a letter about Proposition 30 that urged the UC community to vote. The Alumni Associations of the University of California also voted on Oct. 22 to endorse the measure.

Students’ lack of awareness about Proposition 30 may point to a larger problem with California’s ballot initiative process, Nalder said. Many citizens may not be able to make informed decisions because of the numerous propositions that are often complex, she added.

“A lot of the time, citizens are deciding when they walk into the voting booth based on what’s written on the ballot,” Nalder said. “And you can really be misled when you do that.”