Bruins give back through volunteer work 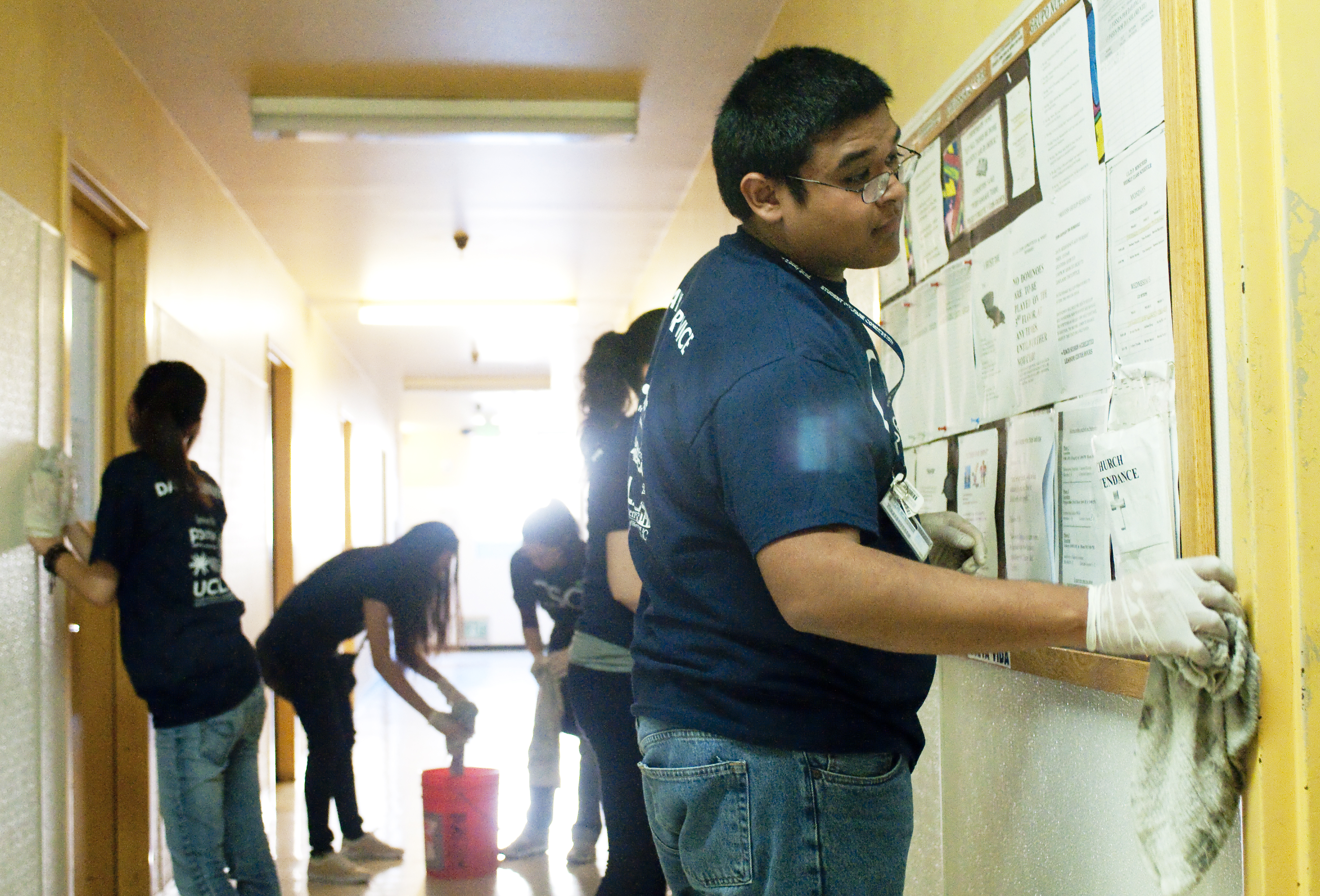 Second-year nursing student Jorge Lopez washes walls at the Union Rescue Mission in downtown Los Angeles. He and about 450 other UCLA students traveled across the city on Saturday to participate in the 10th Annual Day of Service, put on by USAC’s Community Service Commission.

Bleach fumes wafted out of three large, orange buckets in the middle of the hall.

Carefully, Casey Rodriguez knelt down by a water fountain and scrubbed the white wall behind it.

Around the nursing graduate student stood several other UCLA students, all diligently washing the walls of the Union Rescue Mission, which assists and houses homeless individuals in downtown Los Angeles, as part of the Undergraduate Students Association Council’s Community Service Commission’s 10th Annual Day of Service on Saturday.

“It’s important for a student to know what’s going on around them,” Rodriguez said. “I did come expecting to clean. (I’m willing to do) anything to help out.”

Over the years, student participation in the day of service has increased.

“In its inaugural year, the Day of Service attracted about 20 student volunteers,” said Anees Hasnain, the USAC community service commissioner. “This year, about 450 students participated in the event”, she added.

The students bused to 10 different locations on campus and throughout the Los Angeles area, including Grape Street Elementary School in South L.A. and the Salvation Army.

“We (tried) to find ways to engage students in service so they can continue (after the event),” Hasnain said. “I know that cleaning walls isn’t the most attractive or sexy work, (but) it’s truly what (the rescue mission) needs and wants.”

On the men’s floor of the Union Rescue Mission, about 25 students worked in teams to wash the aging white and yellow walls.

Danny Duel, a fourth-year psychology student and president of UCLA Swipes for the Homeless, came to the Union Rescue Mission site with one other group member.

Swipes for the Homeless collects unused meal swipes from students during the end of the quarter and donates them to organizations that serve individuals who are homeless. Duel said that he hopes to partner with the Union Rescue Mission in the future.

He went to the site to observe the impact of service day on people firsthand, he said.

“We never get to see where the food we donate goes,” Duel said. “But now we are able to get some perspective. A lot of our work isn’t very personal so it’s good to have an event like this.”

After the students finished washing the wall, Steve Love, an assistant pastor who has volunteered at the Union Rescue Mission for more than a year, led them on a tour through the facility.

Rodriguez and the other volunteers trailed behind Love as he led them to the facility’s roof overlooking the eastern Los Angeles skyline.

Michelle Nosratian, a third-year psychology and art history student, helped assemble beds at the Downtown Women’s Center, which provides supportive housing for women who are homeless.

“I am always searching for things to do for a sense of meaning,” said Nosratian, a former Daily Bruin contributor.

Her experience led her to exchange contact information with the staff of the Downtown Women’s Center, so she can volunteer there in the future.

“The reason I think it’s important that young people volunteer is that it’s part of a balanced life and (you) experience what you would not experience in your daily life,” Love said.