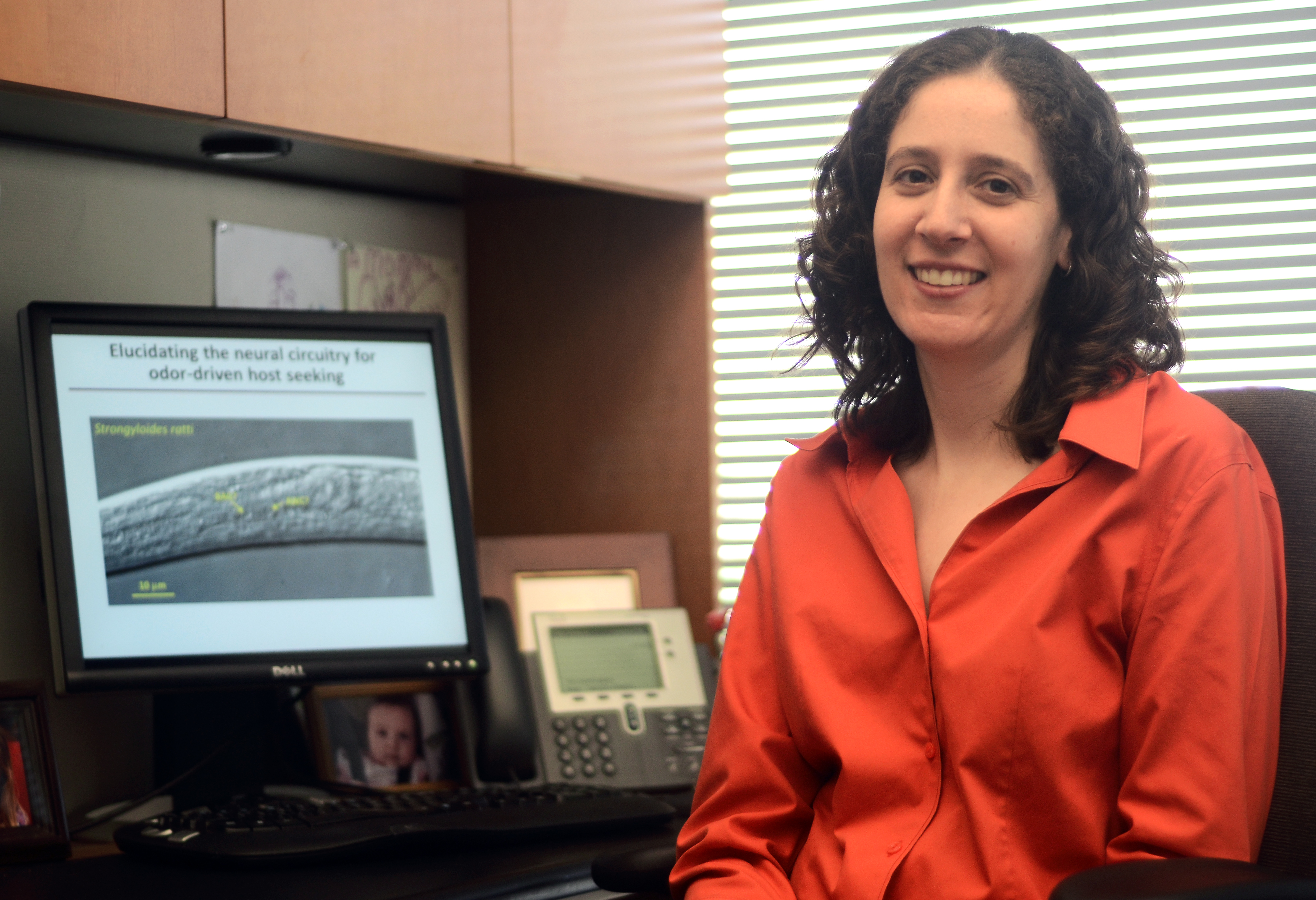 Stacks of science magazines sat on a filing cabinet in the hallway on the second floor of the Biomedical Sciences Research Building. Down the hall, through a window, researchers in white coats were shuffling from bench to bench in the laboratory.

In an office, a phone rang.

It was a representative from the MacArthur Foundation, an institution that supports creative work, notifying Elissa Hallem she had just been awarded a “genius” grant for her research with worms.

Hallem, one of 23 recipients this year from all fields of academia across the country, was recognized earlier this month for her work studying the sense of smell in roundworms.

“I have probably never been so surprised in my life,” said Hallem, an assistant professor in the department of microbiology, immunology and molecular genetics. “(The MacArthur Foundation) just calls you out of the blue. There’s no application.”

The worms, which are simple and transparent, offer insight into how parasites work, she said.

But there’s more to worms than people might think.

The study of how odors affect the non-parasitic worms in lab can help scientists understand how effective the worms are against pests in agriculture, she said. Since the worms share the same composition as parasitic worms, only different behavior, they also provide insight into how scientists can prevent worm-related health problems, she added.

Plus, many of the genes and neural circuits in worms are comparable to those in humans, which makes the worms a good organism to study, Hallem said.

Hallem’s interest in science started at a young age, something she attributes to her father’s doctoral degree in chemistry and his tendency to share scientific articles with her.

Although she doesn’t quite remember the details surrounding her science fair experiment explaining how light bulbs work, Hallem does have fond memories of the community college psychology course she took one summer that sparked her interest in biology and neuroscience, she said.

Before working with worms, Hallem got the idea to study odors through her work with fruit flies and mosquitoes. She was able to study how mosquitoes use their sense of smell to find human hosts, something that could potentially play a role in better understanding malaria and other mosquito-borne diseases.

But she admits she has found a new love.

“I’m partial to worms at this point,” Hallem said.

That’s not to say she isn’t good with people. From outside the otherwise quiet office area, laughter can be heard through Hallem’s door as she meets with a colleague.

During her time at the California Institute of Technology, Hallem worked with several high school and undergraduate students. Sternberg said she had a way of not only sharing her enthusiasm but also effectively teaching the students.

She even trained her students to present in meetings.

“You can just see it continue,” Sternberg said. “She is training the next group of scientists to do what she does.”

After her successes as a postdoctoral student, Hallem’s arrival to UCLA was not by chance, said Jeffery Miller, chair of the microbiology, immunology and molecular genetics department ““ whose office is just next door to Hallem’s.

Members of the UCLA community had been following her work while she was at the California Institute of Technology. In an effort to recruit her to UCLA, the medical school, the life sciences department and the chancellors came together to make an offer, Miller said.

“(Her recruitment) is a great example of collaboration across campus and the fact that we can be nimble and take advantage of outstanding opportunities when they arrive,” he said. “Otherwise, she may very well have ended up at (the University of Southern California).”

Hallem and her team hope to use the new grant money to explore different areas in worm research that are typically more difficult to obtain funds for, she said. For instance, she wants to look into how parasites are sometimes able to change the behavior of their hosts, she added.

She said she thinks the results will be exciting.

When she’s not working, her two young children, 1 year old and 4 years old, keep her busy.