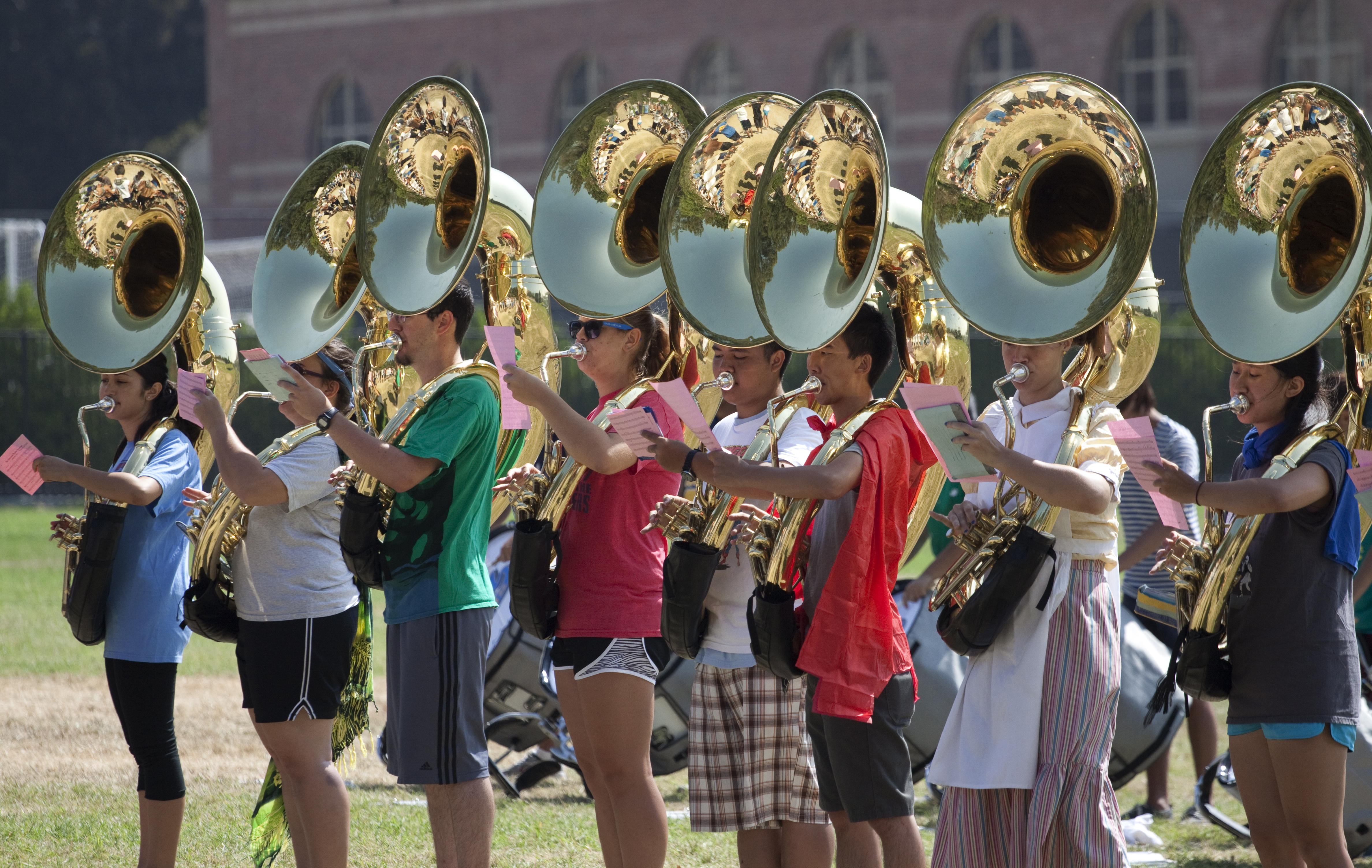 Tuba players in the UCLA marching band practice performances for the upcoming school year as a part of the week-and-a-half long band camp. For a full photo gallery, click here.

The morning sun shines down on campus as Zero Week draws to a close. On the horizon, thousands of Bruins sleep in their bunks, many anticipating Welcome Week activities. But across from Pauley Pavilion, on the far end of the Intramural Field, the grass’s slumber is disturbed by the rank and file of more than 250 dedicated marching band students.

Trumpets and tubas point toward the sky, as students practice their formation. The drum line is off to the side, perfecting its rhythm.

This is band camp.

Each year, before the fall quarter starts, marching band students attend a marathon week-and-a-half training session that teaches band members how to march and how to play the year’s shows. Camp also introduces them to some of the people who may become their closest friends.

Some days are 12 hours long.

“I’ve been going home every single night and putting a hot pack on my ankle,” said Micah Shaw, a third-year Afro-American Studies student, who plays the clarinet.

At dinner, the band members get a welcome rest.

“I don’t know if the food is actually so good or if I’m just hungry,” said one tuba player at the dinner table in a sea of hungry students.

The exhaustion is not what band camp is all about, though. Nor is it how the movies, like “American Pie,” portray it to be.

Sometimes band camp is about “Medieval Mondays” ““ the day when the trumpet players dress up as though they’re from a different age. And sometimes it’s about “Tie Tursdays” ““ when the tenor saxophone players wear ties to camp. On the first Wednesday, it’s about meeting the freshmen and eating from an In-N-Out truck.

“People have this obsession with (thinking we go) away,” Shaw said. “I’ve never been to the woods for band camp.”

Band camp is also about friendships.

Since band camp is before the start of the school year, the transition between high school and UCLA for new members has been smooth, said Brock Embleton, a first-year applied mathematics student who plays the trumpet.

Band camp gives him the opportunity to make friends before fall quarter, he said.

Some members of the band join a band service fraternity or sorority, Kappa Kappa Psi and Tau Beta Sigma, respectively.

The organizations help the band by coordinating social nights after band camp to help inspire more interaction between sections, like an ice cream social, or arranging the delivery of 300 Snapple for thirsty marchers at dinner, said Sarah Cox, a fourth-year music history student who is president of the Tau Beta Sigma sorority.

Cox has been part of the band since her first year at UCLA. This year she is taking a more managerial position, making sure the right people are on the field at the right time. In the event that someone gets sick Cox will play for the band as a substitute.

This job is a way for her to give back, she said. She still remembers the first time she walked into the Rose Bowl as a first-year.

She said the feeling of being something so big and the power the instruments command when all eyes are on the band is something she will never forget.

Jason Scapa, who graduated in 2011, rooted for UCLA long before he was a freshman.

When he was accepted to the marching band his first year he said he was excited to be playing for the team he cheered for his whole life.

“I remember my first day of band camp walking into Pauley Pavilion ““ the mecca of college basketball ““ (and in) that moment realizing that “˜yes, I’m here at UCLA,’ and I walked into the center of college athletic sports,” he said.

The diverse group of people he met at band camp was one of the most meaningful parts of his band experience, he said.

Scapa visits his undergraduate band friends about once a week. He tailgates the football games with alumni friends and watches the pregame show.

At halftime there are no bathroom breaks. He and the crew cheer for the band, instead.