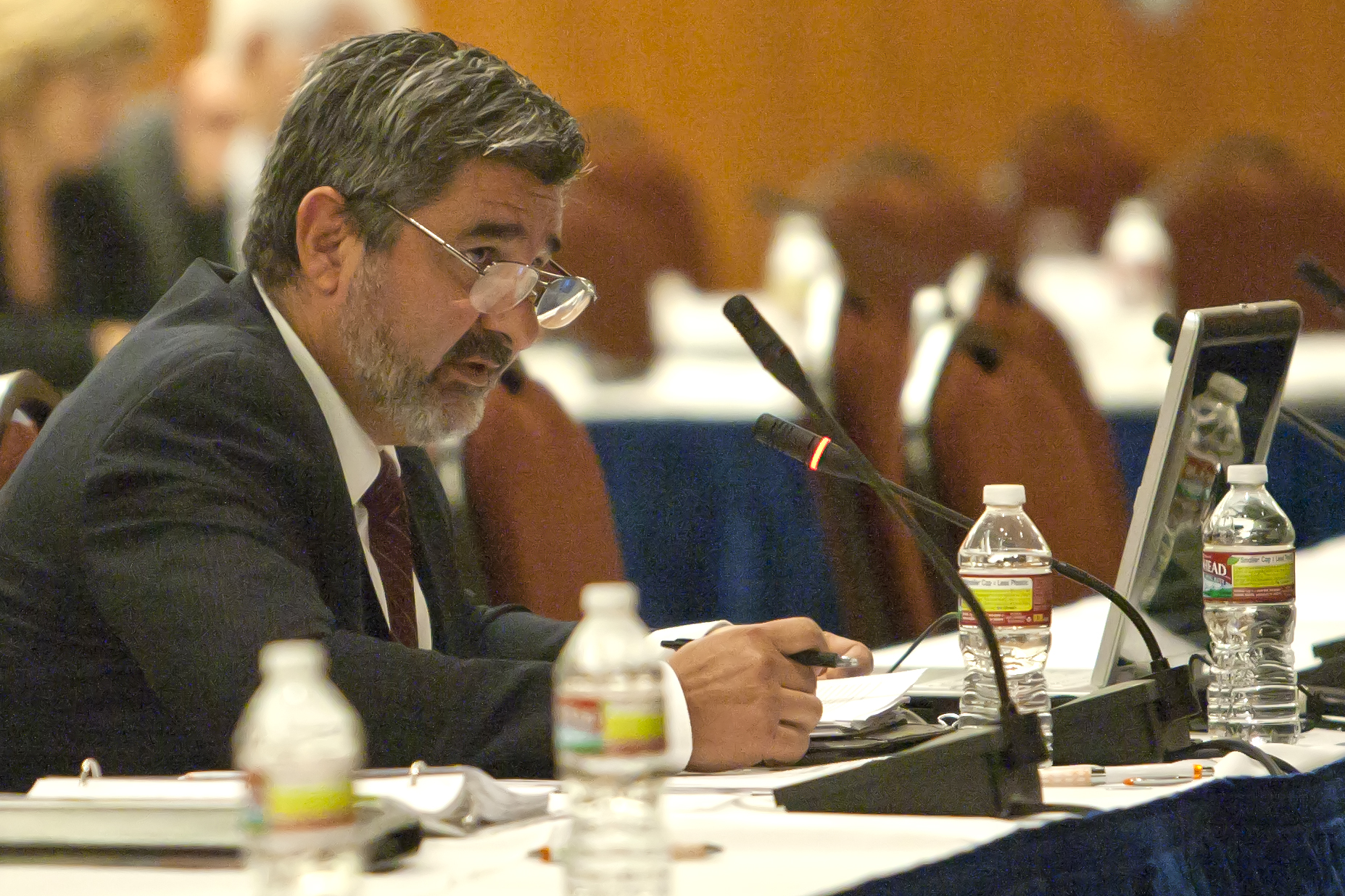 UC Vice President Patrick Lenz discusses budget strategies at a meeting of the UC Board of Regents earlier last week.

SAN FRANCISCO Â­””mdash; With the November elections approaching, the University of California Board of Regents continued its discussion of possible revenue-building strategies ““ in the event University funding is slashed midyear ““ at its bimonthly board meeting last week.

Gov. Jerry Brown’s tax initiative on the ballot this year was repeatedly mentioned in the discussions, though no consensus was reached as to what steps the University would take in the event voters turn down the measure.

“There will be no simple solutions ““ only difficult, complex ones,” said UC President Mark Yudof.

The initiative, titled Proposition 30, would raise the sales tax by a quarter of a cent for four years as well as income taxes on households that earn $250,000 or more annually.

If the governor’s tax measure fails, the UC will be dealt a trigger cut of $250 million in state funding.

If voters do not approve the tax increase, the UC will also lose out on a potential $125 million tuition buyout ““ additional funding the state would grant to the University in return for not raising tuition, according to the enacted California budget.

UC officials have said it is likely that student tuition will rise by at least 20 percent over the remainder of the year if the measure fails.

But even if California voters pass the tax initiative and the UC avoids the mid-year state cuts, the University will still face “serious” fiscal challenges and needs to examine all possible ways to counter them, said Regent Chair Sherry Lansing at the meeting.

The regents discussed a wide range of options for dealing with the long-term decline in state funding, some favored by the board more than others.

One proposed idea was to increase the number of out-of-state students, who pay higher fees than California students. In order to do so, the board would have to formally increase its self-enforced nonresident enrollment cap.

The current cap lies at 10 percent of total enrollment systemwide, but could be raised to 15 or 20 percent, said Nathan Brostrom, the executive vice president of business operations for the UC.

“If qualified (out-of-state) students can come, and they help us pay for continuing the support of this University, then I’m all for it,” said Regent Norman Pattiz at the meeting.

Some regents, however, said they were concerned about displacing qualified California residents, which would likely happen if the enrollment cap increased.

“When we turn away qualified California residents for others who can pay extra, there’s a price to be paid,” said Regent Eddie Island at the meeting.

The UC Office of the President also proposed changes to the University’s financial aid model at the meeting .

The UC currently has what is called a “return-to-aid” policy, which states that a set percentage of all revenue generated by tuition ““ about 33 percent of its tuition-generated income ““ will be redirected to students through financial aid, Brostrom said.

The University could, however, save money if it were to adopt a different model for financial aid, Brostrom said. Using private donations to match aid would be one option, he added.

But some regents expressed concerns for changing the return-to-aid policy.

“While (UC officials) may be confident that they can fundraise sufficient amounts for financial aid today, what about tomorrow? Or 10 years from now?” said Student Regent Jonathan Stein.

The regents also discussed several other potential budgetary options, ranging from renegotiating the University’s debt payments to raising parking fees, although no consensus was reached about what will be done in November.

Rearranging debt payments, for example, could save the University at least $50 million a year, Brostrom said. Changes in parking management could potentially earn $1 billion, said Peter Taylor, chief financial officer for the UC. Reducing health and welfare benefits for UC employees would save about $100 million.

Some regents voiced concerns that the measures discussed could not be implemented quickly enough to mitigate the immediate budgetary stresses of the UC, while raising student tuition always remains an option.

The next regents meeting is expected to take place from Nov. 13 to 15, one week after the November elections.

“I hope somebody’s going to have a plan when November comes around because the election (will) have already happened,” Pattiz said.