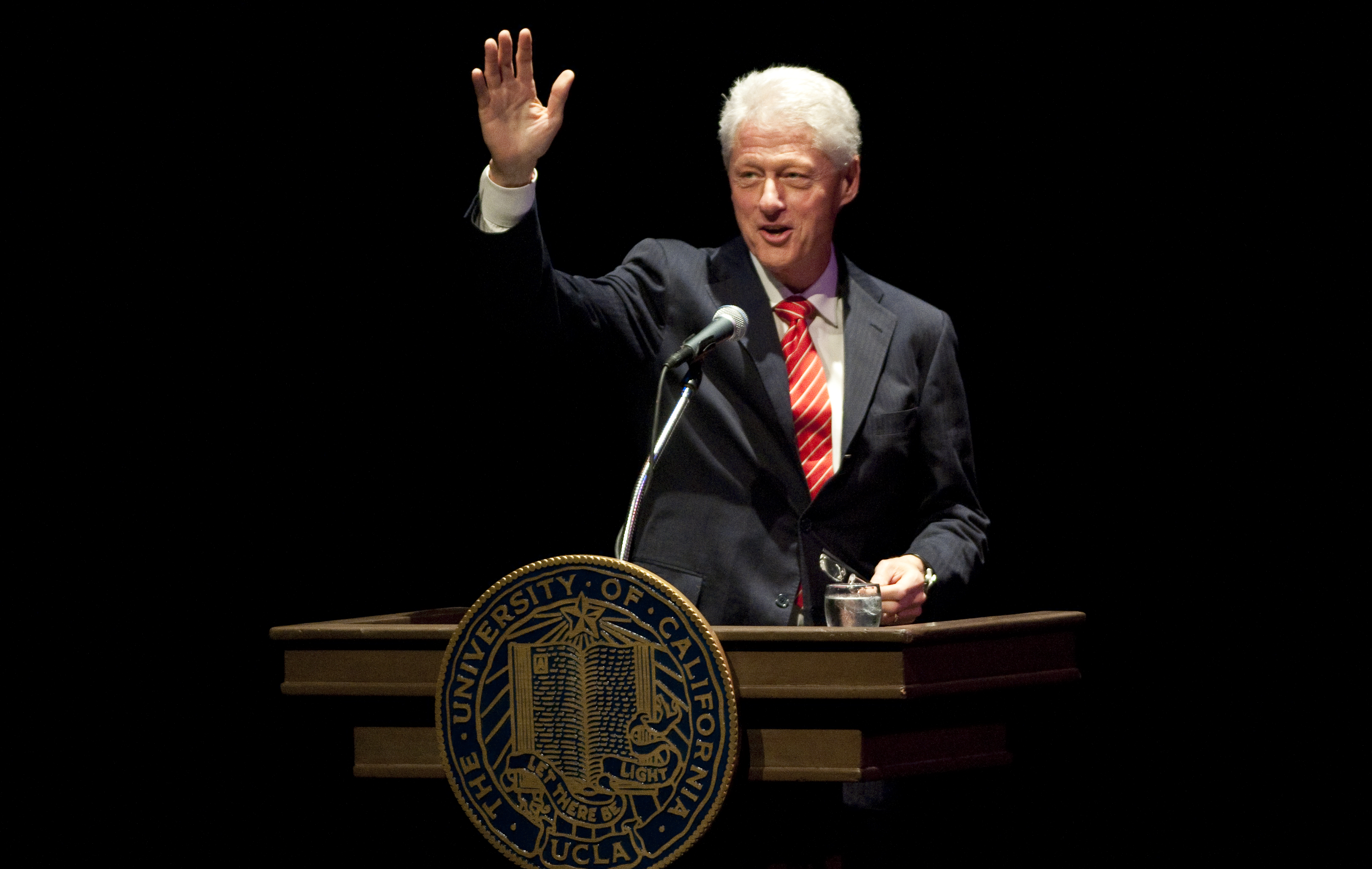 Former President Bill Clinton was a guest speaker at the inaugural Luskin Lecture for Thought Leadership held Wednesday. He spoke to more than 1,800 people on embracing our common humanity throughout the world.

Former President Bill Clinton spoke to a crowd of more than 1,800 people at Royce Hall on Wednesday, marking the first annual Luskin Lecture for Thought Leadership.

Hosted by the College of Letters and Science, the annual lecture series was launched as part of a $100 million gift in 2011 from alumni Meyer and Renee Luskin. The series is meant to create dialogue among the university community, said UCLA spokesman Steve Ritea.

The Luskins and deans of the UCLA College of Letters and Science decided they wanted the lecture series to kick off with Clinton because he embodies effective, reform-minded leadership, Ritea said.

“I never met a person who was entirely self-made,” Clinton said.

“We live in an interconnected world.”

Clinton cited his own education as an example. He worked hard in school, but various scholarships facilitated his success.

He also emphasized that despite slow economic recovery following the recession, he is optimistic that the country will bounce back.

“It’s hard for a lot of people in California to hold onto (hope) because of all the brutal economic situations that the state has endured,” Clinton said.

He said that when he became president, California was one of the states hardest-hit by the recession in the early 1990s ““ but it too recovered.

Leslie White, a Los Angeles resident who attended the event, said she felt it was meaningful for the former president to have spoken on a college campus. She has had two children in college, she said.

“College grads are going to be at the forefront of whatever happens in the future,” White said.

“To have expressed his optimism about the country and the world while it struggles is more meaningful because he spoke to a lot of college students (in the lecture).”

About 900 tickets were given to UCLA students for free on a first-come, first-served basis.

Madhu Narasimhan, a third-year political science student, said he was one of the last students to get a free ticket.

Narasimhan, who said he has been a longtime fan of Clinton, also saw the former president speak at UCLA during a rally to endorse Gov. Jerry Brown for the 2010 state gubernatorial election.

“The content of the speeches was different,” he said.

“The first one was more political, and this one was more about embracing our common humanity; it had a more visionary and hopeful approach.”

Jonathan Li, a fourth-year molecular, cell and developmental biology student, said that while he enjoyed the inaugural lecture and agreed with the former president’s views on interdependence, he wished the speech had been more empowering to students in particular.

The holders of the first 500 free student tickets got a seat in Royce Hall, while the rest were invited to a room in Haines Hall to watch a live videocast of the event. The remaining seats were sold to the general public starting at $100.

Prior to the start of the lecture, Chancellor Gene Block presented the Luskins with the inaugural Fiat Lux award, which “honors those whose vision and action have manifestly enriched and transformed UCLA,” Block told the audience.

The award was first recommended in 2010 by the chancellor’s office to honor people who have rendered distinguished service to UCLA, Ritea said.