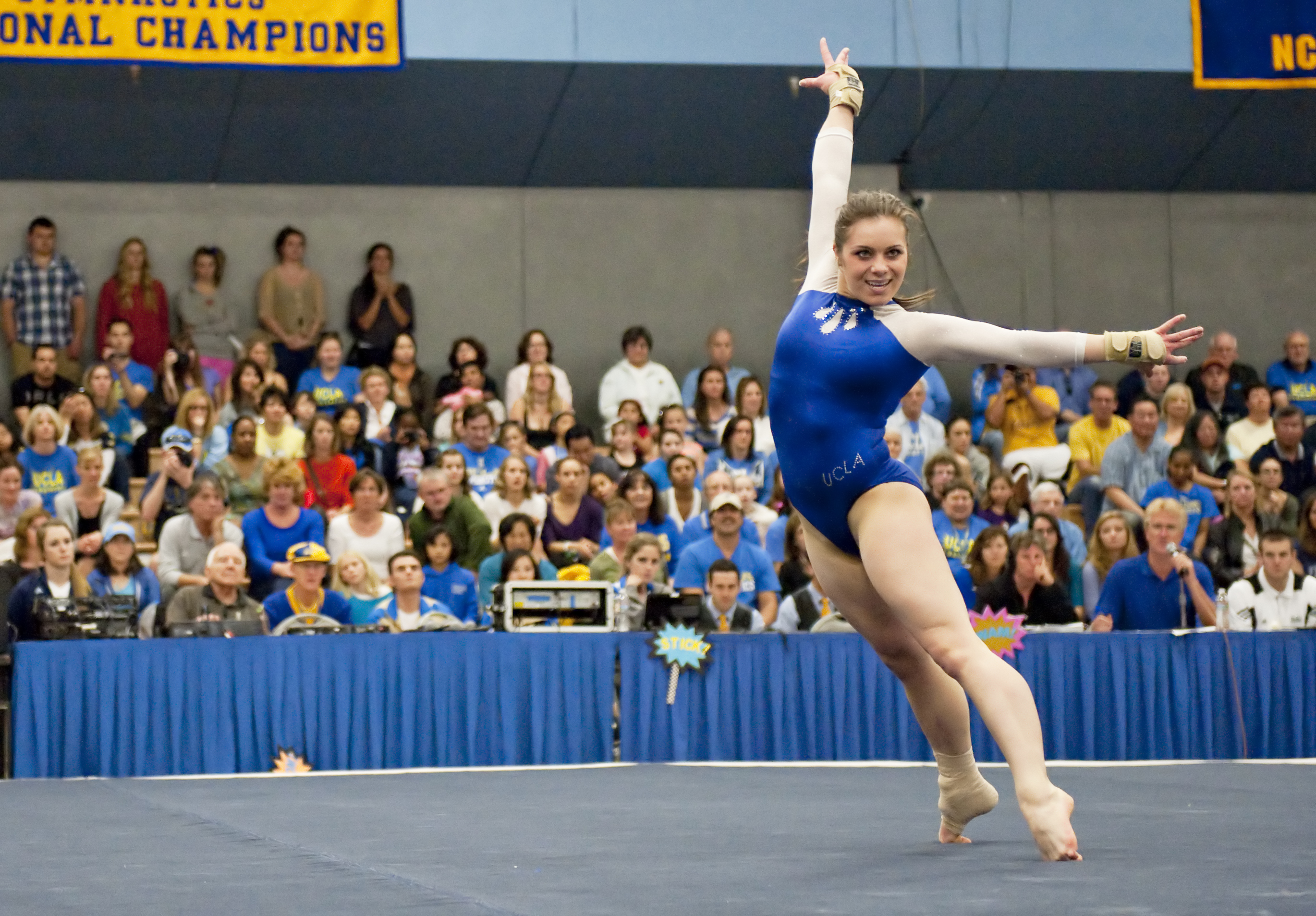 Senior Elyse Hopfner-Hibbs scored a 39.300 in the all-around in the Bruins’ loss to Georgia this weekend.

Blanketed in a sea of black T-shirts and red body paint, Stegeman Coliseum was buzzing with the applause of Georgia fans as UCLA entered the arena of its cross-country rival Friday night.

Unfortunately for the Bruins, the crowd ““ and the momentum of the meet ““ shifted strictly in favor of Georgia by the beginning of the third rotation, leaving UCLA to settle for second place by the end of the competition. UCLA fell to Georgia 197.7 to 196.975.

The Bruins (9-2-1) tallied their second loss of the season after falling to the Bulldogs (6-3). The previously No. 3 Bruins gained their highest away-meet score of the season, but could not outscore the Bulldogs in the last two rotations of the meet to pull out a win.

“We did not compete well at all,” coach Valorie Kondos Field said. “We could never get in a good groove. It felt like we were mentally not as assured as we needed to be to come in and perform well.”

The Bruins started on the uneven bars, where they posted a 49.300 total. Sophomore Sam Peszek scored a 9.90 for the Bruins on the event after having only performed on balance beam the week before. The Bulldogs began on vault, where they took the lead by a slim 0.15-point margin.

Heading into the second rotation, UCLA posted a 49.45 on the apparatus with the help of three 9.90 vaults. Senior Tauny Frattone highlighted the rotation with a career-high tying 9.95, and the Bruins narrowed the Bulldogs’ lead to only 0.075.

The tides turned in favor of Georgia in the third rotation. The Bulldogs began the rotation on balance beam with scores of 9.9 and 9.925 and ended with an impressive 49.475 total on the apparatus.

Meanwhile, UCLA met its first real hindrances of the meet on floor, where it counted a 9.725 from Frattone and dropped a 9.475 from freshman Mattie Larson.

“It’s one thing to have one or two athletes off. That’s what being part of a team is ““ you have each others’ backs and you step it up,” Kondos Field said. “We had more people not stepping it up this meet. There’s no excuse.”

Heading into the final rotation, Georgia held the lead by 0.35 of a point. The Bruins, however, could not make up the difference in the last rotation, counting an uncharacteristically low score of 9.675 from sophomore Olivia Courtney after a fall from the usually consistent redshirt junior Vanessa Zamarripa. The fall broke Zamarripa’s streak of 68 consecutive hit routines.

Courtney, who had not performed on beam since the team’s season opener, felt that she and the team could not focus their energy to squeak out a win.

“I was really excited to get back into the beam lineup, but I’m a little disappointed in how I performed,” she said.

“I just had so much adrenaline and I didn’t control it the right way. I think we all were just so excited and we went super hard instead of having that calm, cool confidence that we usually have.”

Senior Elyse Hopfner-Hibbs, who scored a 39.300 in the all-around, echoed her teammate’s thoughts on the team’s performance.

“It’s disappointing only because we know we have so much more potential than what we displayed tonight, which is frustrating,” she said.

Though the gymnasts and coaches alike agreed that the meet was not one of the Bruins’ best, Kondos Field said that there was a silver lining to the team’s unusual performance.

“It wasn’t a good meet for us, and that just tells you how talented we are,” Kondos Field said. “We’re scoring almost a 197 on an off meet.”

Courtney agreed with her coach, remarking that the team’s high score adds a bit of encouragement even after the loss.

“We know we made a lot of unusual mistakes tonight, but we know we can take care of those easily,” she said. “It’s a little disappointing, but at the end of the day, we know we can do better.”