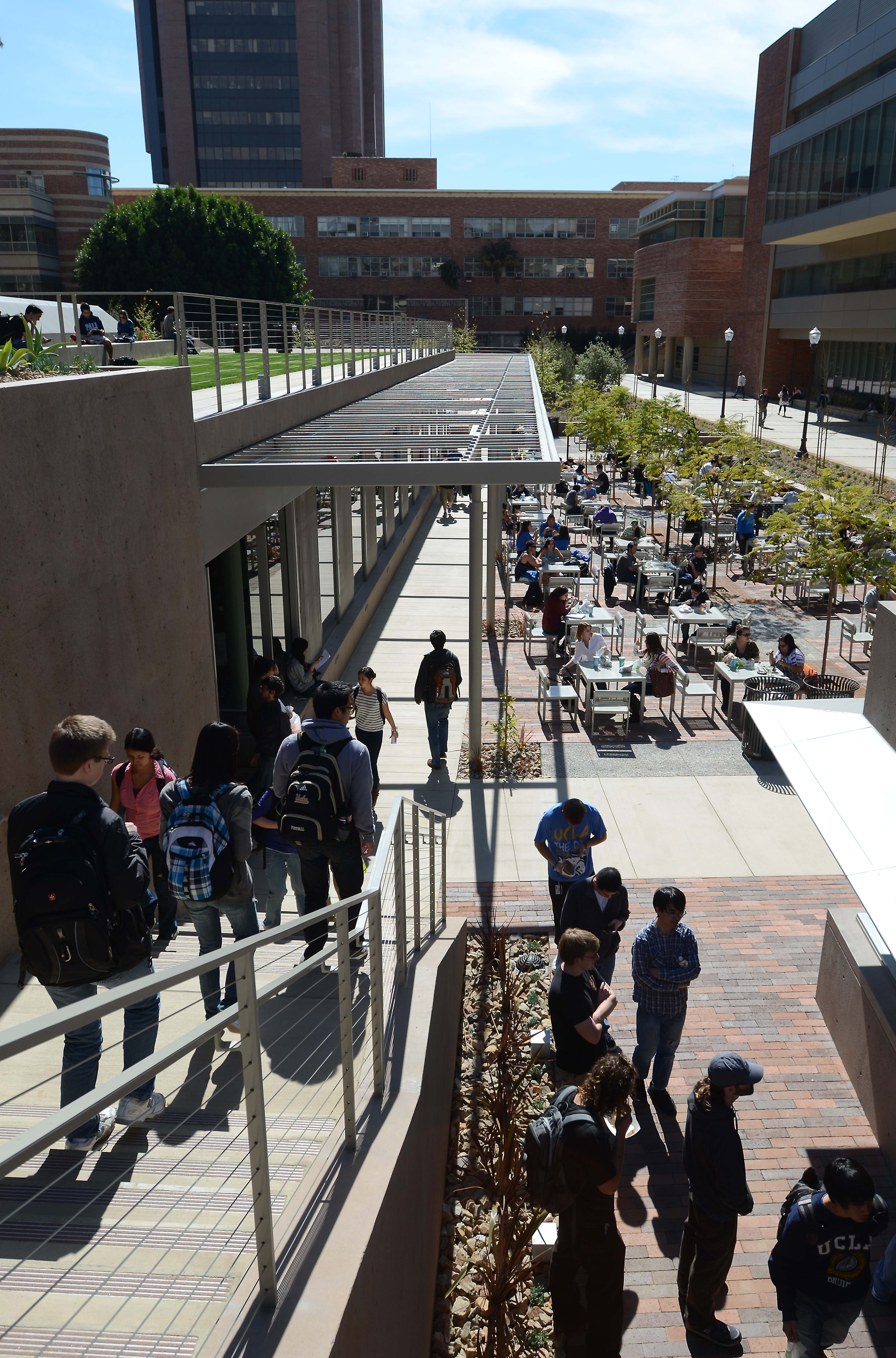 Students walk through the South Campus Court of Sciences Student Center. The center opened Tuesday and houses new restaurants including Yoshinoya and Subway, as well as two original ASUCLA restaurants.

Correction: The original version of this article contained an error. Cindy Bolton, director of food services for ASUCLA, said the center simulated mock rush-hour situations to prepare for the influx of students expected once the facility opens.

After more than two years of construction, the center saw its first customers Tuesday.

The new center, which is certified by the Leadership in Energy and Environmental Design for energy efficiency, replaced the Bombshelter, South Campus’ former dining area that was demolished in 2009. The opening of the center was expected to take one-and-a-half years but was delayed twice ““ once in September and again in January ““ because of ongoing construction and last-minute renovations.

Among its dining options are restaurant chains Subway and Yoshinoya. Original restaurants include the Bombshelter Bistro, which hosts a selection of sandwiches, salads and soups, and Fusion, a multi-ethnic eatery that offered Vietnamese cuisine Tuesday.

Southern Lights, a coffee and frozen yogurt shop that takes its name after its North Campus counterpart, and a small UCLA store are also found in the center.

The facility offers a good amount of food choices and is in a convenient location for South Campus students, said Zhiping Chen, a fifth-year graduate student in physics.

He said he was especially excited about the option of having Subway on campus.

Chen’s enthusiasm for the variety was echoed by others, as lines of more than 20 people formed in front of each of the four restaurant storefronts.

Chatter filled the air as customers commented on the food choices and navigated through the crowd.

“It’s great to get (the center) open, and the amount of people inside and outside provides a good atmosphere,” said Bob Williams, executive director of Associated Students UCLA.

Finding a table, however, became difficult for many diners when the center entered its first lunch rush hour.

Groups of customers wandered through the maze of tables searching for an open seat.

Alex Huters, a graduate student in chemistry, said he was lucky enough to have already ordered his food and sat down before the rush of diners came into the center.

The center has a good selection of food, but the employees are still getting used to working, Huters said while eating a sandwich from Bombshelter Bistro.

They also simulated mock rush-hour situations to prepare for the influx of students expected once the facility opens, said Cindy Bolton, director of food services for ASUCLA.

Huters said, however, he would miss the food trucks that frequented South Campus during the center’s construction.

“I did like the food trucks,” he said. “But (the new center) is definitely better than the old Bombshelter.”

Despite the decor and the variety of choices, Jasmine Ho, a third-year biology student, said she thought the new facility was too cramped.

She said the center is really crowded and the floor plan does not help the problem.

He said the space is small and lines of customers don’t easily fit, especially during rush hour.

The center will be busy for the first few days and will take awhile to get up to speed, Williams said.

There will also be adjustments after ASUCLA sees how the center initially runs, he said.

Some operational changes will be made, and the dining room layout will most likely be altered as well.

In the meantime, the center will continue to run and be monitored by ASUCLA.

“I’ll most likely come back, just not during rush hour,” Ho said.

A small ceremony to honor the center’s opening is being planned for spring quarter, Bolton said.