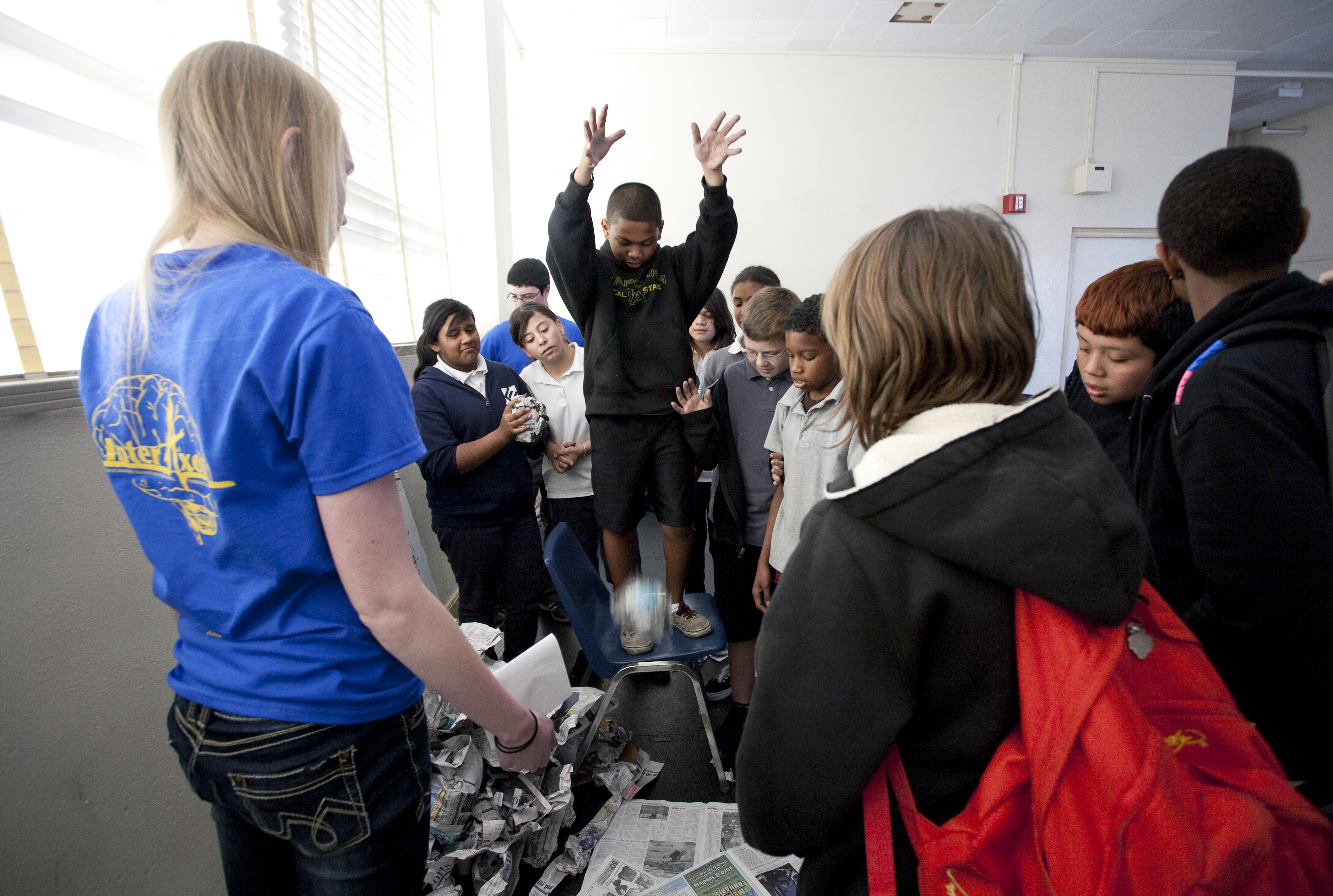 Middle school students drop eggs padded with newspaper onto the floor, part of a neuroscience presentation by UCLA club Interaxon.

By Jingxi Zhai and Kassy Cho

Sixth-grade student Juliette Connelly stood on a plastic blue chair and dropped an egg padded with newspaper onto the floor.

She quickly jumped off the chair to join her eager classmates, who had crowded around to watch as the layers of newspaper were slowly unraveled.

To everyone’s disappointment, the egg, which represented a human brain, did not survive the fall.

This interactive presentation at Emerson Middle School in Westwood was put on by Interaxon, a UCLA student club that travels to underperforming local elementary, middle and high schools and gives presentations on neuroscience topics such as traumatic brain injury.

The club’s goal: to help students realize that science can be fun and interesting, said Roshan Burns, a fourth-year psychobiology student and co-president of Interaxon.

The club, which has about 60 members, was founded at UCLA in 2006 by alumna Shanna Fang, who wanted to give students the opportunity to teach younger students about neuroscience outside the classroom. The club has since expanded to other campuses, including USC, UC San Diego and Boston University.

The name is a combination of the word interactive and the science term “axon,” a part of the brain cell.

The club holds an event at a local school almost every week, said Michael Bonitati, a fourth-year neuroscience student and co-president of the club. Members are required to participate in two of these presentations per quarter.

The club aims to engage students who are not exposed to science in their schools on a regular basis. The club also works to encourage the schoolchildren to go into higher education, especially in the sciences, Burns said.

During their presentations, the members of Interaxon try to be positive role models for the students.

“It’s like we’re saying, “˜Look at us, we’re college kids having fun with science. You can, too,'” Burns said.

During the visits, many younger students often ask the club members about their college experiences, ranging from how to apply for college to the types of classes they take to balancing athletics and academics, Burns said.

Because Interaxon pays multiple visits to certain schools, Avinash Basa, a third-year neuroscience student and a member in the club, said he has encountered several students who remember him from previous visits.

“The fact that they remembered us and what we taught them makes it really worthwhile,” Basa said. “It makes what we are doing that much more valuable.”

The students feel comfortable with adults and college students because they visit often, said Noriko Nakada, a teacher at Emerson Middle School.

During a dance demonstration intended to teach students about muscle memory, Citlali Sanchez, a sixth-grade student who takes ballet classes, volunteered to reenact a dance sequence put on by an Interaxon group member.

“Now I know how my body knows how to dance,” Sanchez said.

Since the students they work with vary in age, the club must tailor its presentations to specific grade levels depending on the day, Bonitati said.

The presentations help reinforce the material for club members, making sure they actually understand it, Basa said.

“The kids ask really good questions, and we need to really know the material to address their questions,” he said.

High school students are often curious about the topics Interaxon teaches, especially about the effects of drugs on the brain, said MaryBeth McEvoy, a fourth-year psychobiology student.

And while some younger students do not always show much interest in the topics, when Interaxon finds those students who are passionate, it is just that much more rewarding to be able to help them, Burns said.