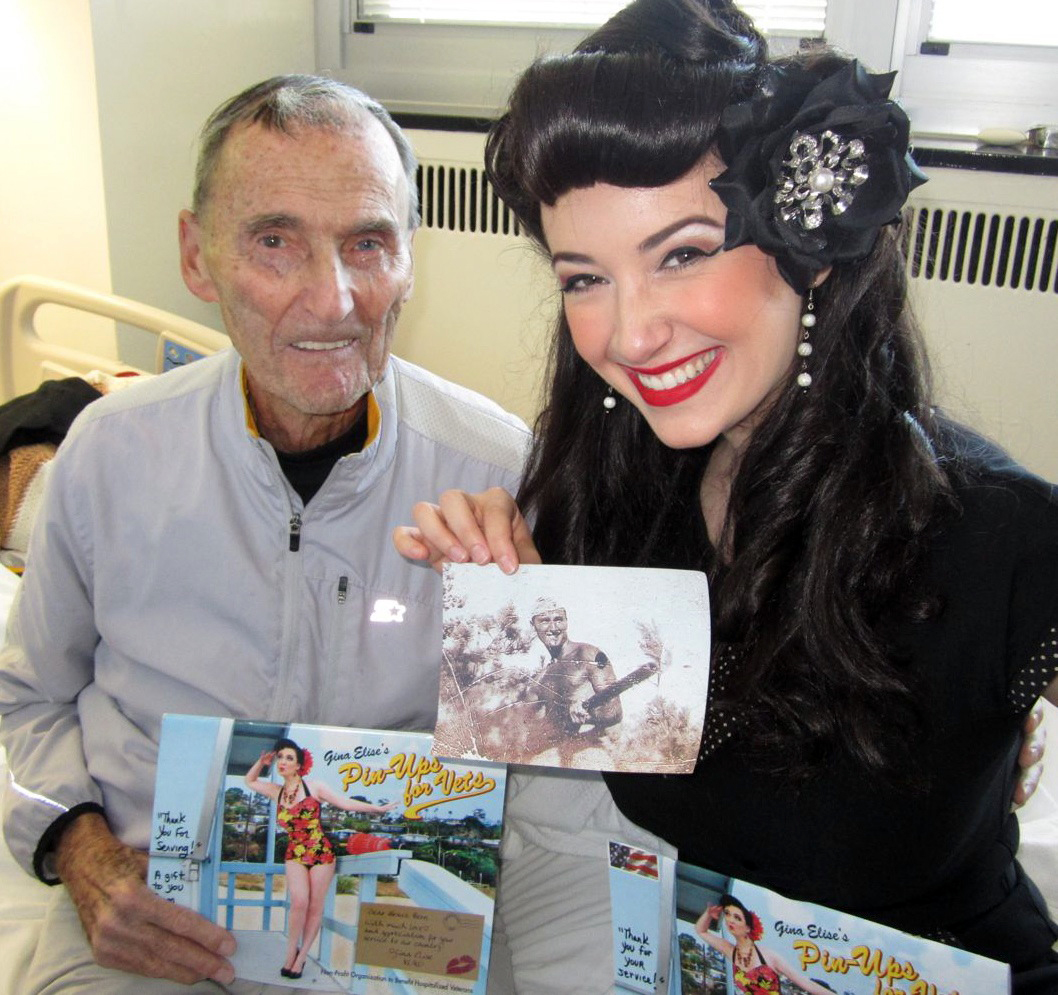 Since 2006, UCLA alumna Gina Elise has raised more than $50,000 to improve physical, cognitive and rehabilitation therapy for veterans. Her nonprofit organization sells calendars, posters and T-shirts with a retro 1940s pin-up theme. Elise has visited veterans in more than 30 hospitals in 20 states.

Naturally, the UCLA alumna draws a lot of attention from hospitalized veterans.

“The veterans really get a kick out of it,” Elise said. “I come with a polka dot 1940s dress, bright red lips and a flower in my hair. It’s like I stepped out of a time machine.”

Dressing as a World War II pin-up girl, Elise uses the retro feel of the 1940s to pose for calendars, posters and T-shirts.

She then delivers to veterans as part of nonprofit organization, Pin-Ups for Vets. The organization, which sells the merchandise through its website, raises money to improve the physical, cognitive and rehabilitation therapy for veterans.

The pin-up theme comes from Elise’s long interest in pin-up women paintings, especially the artwork drawn onto the sides of war planes as a morale boost, Elise said.

She said she has always been a big fan of art from the 1940s, but the idea for the organization started in 2006 when she heard about the issues of underfunded veterans hospitals over the news.

“When I was brainstorming for a project, I thought to myself, “˜How can I combine my love of this art and do something for the good?'” she said.

She produced her first calendars in 2007, raising $5,000. Since then, Elise said she has raised more than $50,000 and delivered thousands of calendars. The 2012 calendar marks the sixth year for the organization.

A $15,000 donation the organization gave to the health care system allowed the facility to purchase a new environmental control unit, Karabatsos said.

“If anyone should have proper medical care, it should be our veterans,” Elise said.

Making visits to veterans, who often don’t see many visitors, is her favorite part of her job, she said. She often sees soldiers who are missing limbs or endured severe burns in the war zone.

“It’s just a calendar, but it means so much to them,” she said. “Many of them are in bed for weeks and weeks, and honestly, when they see me, a lot of them start to cry.”

The vintage World War II outfits reminds veterans of that era, and what they fought for, said Philip Parker, master sergeant of the U.S. air force.

“Look at the pictures of the smiles on veterans’ faces,” Schlitz said. “Look at the photos of the deployed veterans, and you can see for a moment they don’t care about the war. They are just happy someone at home is thinking about them.”

In a partnership with Cooking with the Troops, a charity that provides comfort and nutrition to troops,

Elise also traveled to Germany as part of Operation Fight Post-Holiday Blues to visit and help prepare a gourmet meal for the troops. The operation took place last January, as a way to help boost morale during the post-holiday season.

Elise’s project has brought together older veterans and the public, said C. Blake Powers, CEO of Cooking with the Troops.

“It reminds the public not to forget about our older veterans, whose families are all gone,” he said.

Elise said she hopes to visit at least one veterans hospital in every state. As of December, she had visited 20 states ““ and 32 hospitals.