UCLA Faculty Center to stay, conference center to be built over Lot 6 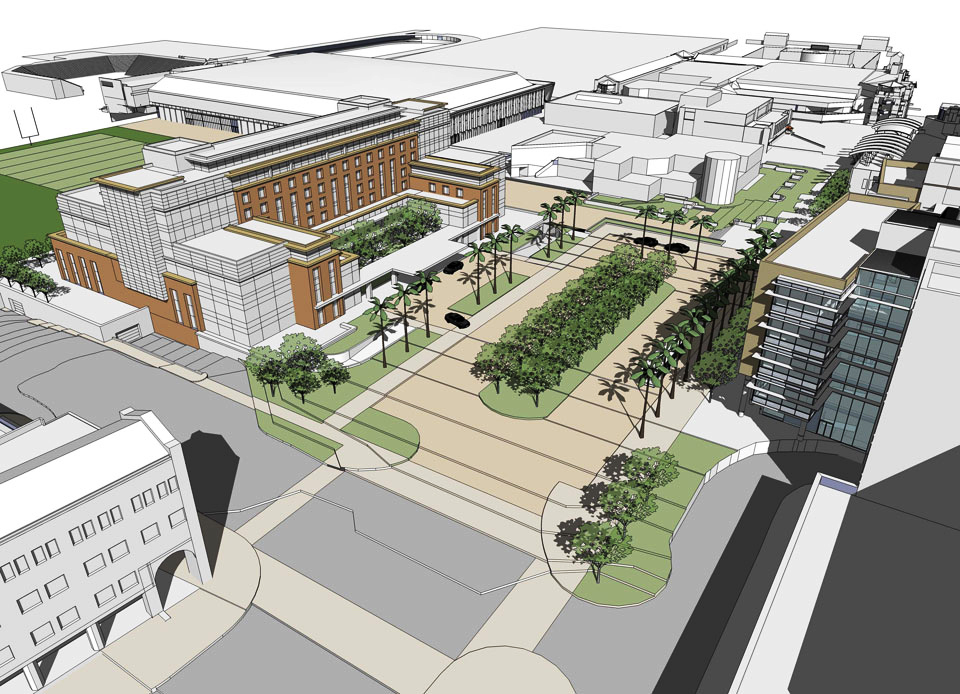 The UCLA Faculty Center is no longer in line for demolition.

UCLA has shifted plans for a new seven-story conference and guest center, partially financed by the $100 million donation by alumni Meyer and Renee Luskin, to the site currently occupied by Parking Structure 6.

When the donation was first announced in January, faculty quickly protested the administration’s plans to replace the well-loved Faculty Center building with a residential conference center and faculty club. Professors organized a “Save the Faculty Center” campaign in opposition.

Tuesday’s announcement came as a relief for those working to protect the old Faculty Center building.

“I’m very pleased to learn the administration has changed their plans,” said Bill McDonald, president of the Board of Governors of the Faculty Center Association and a professor in the school of Theater, Film and Television. “We look at it as an acknowledgement from the administration that the Faculty Center plays a vital role in the UCLA community.”

The initial building plan was formally challenged in April, when the Academic Senate advised the administration to reconsider the location of the center as well as the pricing of the hotel.

The new proposal places the center at the current site of Parking Structure 6, a 750-space lot at the end of Westwood Plaza next to Spaulding Field.

Project developers assessed the impact on parking and found that there was enough parking nearby on campus to allow for the elimination of the structure, said Steve Olsen, vice chancellor for finance, budget and capital. He specifically pointed to Lot 7 and Lot 4, and Parking Structures 8 and 9 as places to park.

The new conference and guest center will also contain 125 parking spots underneath the center, Olsen said.

This site is more centrally located, closer to both Westwood and important buildings, like Ackerman Student Union, that may be of interest to visitors, Olsen added.

The center will include an expanded turnabout to minimize the impact of increased traffic, said university spokesman Steve Ritea.

“We understand how critical it is to maintain good relations with our neighbors and represent the wishes of faculty,” said Chancellor Gene Block. “This new location seems to have won the support of both groups.”

But the actual impact of the new location on the neighborhood is unclear as of yet, said Laura Lake, member of the Westwood Community Council.

One community group that may be affected is local hotel owners, Lake said. Rates for the new hotel would be $185 per night, compared to the average rates of local hotels that reach more than $200 per night, Ritea said.

The change in pricing came after the Academic Senate submitted a report last spring recommending the center lower its nightly rates to fit the expected demand. Originally, room prices were set at $270 a night.

The hotel will be reserved for those attending conferences or doing business with the university, Ritea said.

Ben Zuckerman, a member of the Save the Faculty Center committee and professor of physics and astronomy, said he thinks the new plan is a step in the right direction, but it remains to be seen whether the community is well served by the hotel.

The main point of contention, Zuckerman said, is whether the hotel is a good long-term investment

“It may suffer financial loss if there isn’t a lot of demand,” Zuckerman said. “I also wonder whether it’s the best way to serve the student population.”

The project is slated to cost a total of $152 million, $50 million of which will come from the Luskin donation.

From the donation, $40 million will go towards construction of the center, and the remaining $10 million will endow a program to pay for academic conferences, said Olsen.

No student tuition or state funds will be funneled into the project, Olsen said.

The administration will make the proposal to the UC Board of Regents in March, Olsen said. A meeting to discuss the scope of an environmental impact report will take place Nov. 14 at 7 p.m. in the Faculty Center’s California Room.

If approved, demolition of Parking Lot 6 would begin in the summer of 2013. The project would reach completion by winter 2016.