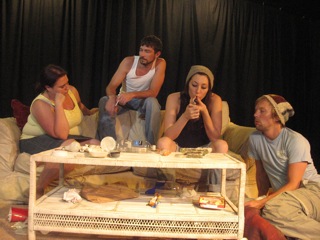 Addiction isn’t a problem that gets solved in an hour and a half.

This is why “Tweaked,” the new play by Paul Shoulberg, succeeds best in not attempting to propose a cure within its given time frame, but in allowing for an examination of the issues that stem from its continuation. The action centers around the three inhabitants of a single room in an undisclosed city and time. All three are battling addiction to crystal meth while confronting the resultant problems in their individual personal relationships.

Charlotte (Isidora Goreshter) has an unwitting, budding romance with a guy from the corner coffee shop who has no idea of her condition. Maddy (Robin Schultz) is trying to stay clean so that she can visit her young daughter and earn back the trust of the child’s father. Meanwhile, Grogan (Shawn-Caulin Young) is exhausting his only perceived source of income, selling his plasma at the local blood bank, for just enough cash to pay off his dealer.

For someone who doesn’t have to battle the problems these characters do, something as simple as scanning the carpet for any loose fleck of stash (as Grogan does multiple times) doesn’t seem as important as reconnecting with a lost daughter. But “Tweaked” shows that addiction has a way of leveling it all, of attaching equal importance to any problematic circumstance.

Rather than create an unrecognizable world to draw these problems into, the staging imports drug-related problems into a set of locales familiar to the audience. “Tweaked” also reminds viewers that life’s problems are not confined to users, as evidenced by the rage issues of Jake, Maddy’s ex-boyfriend, and the sexually predatory nature of Trey, their dealer.

In the universe Shoulberg conveys, the smaller problems are the most captivating and lend themselves to the best performances. Charlotte’s love troubles and Grogan’s twitchy, feverish search for his next hit are as wrenching in their characters’ spotlit monologues as they are in a heartbreaking shouting match between the three friends.

Toward the middle of the play, all three pairs of interactions play out alongside each other, complete with overlapping dialogue and simultaneous action. But the real effectiveness of that all-cast showcase comes in the final third of the play, when Shoulberg shows the audience that battling addiction is not a blanket story of either success or failure. One user can experience shifts from optimism to crushing bleakness, but thankfully, the reverse is also true.

“Tweaked” does not exploit the large number of people in the Los Angeles area who struggle with the loneliness and dependence that connect the characters in this play, high or sober. There’s a central question posed in the title and chorus of the song that plays during scene changes, the Buzzcocks’ “Why Can’t I Touch It?” Rather than try to answer that riddle, “Tweaked” does well to simply show its characters realizing that they’re a part of it.