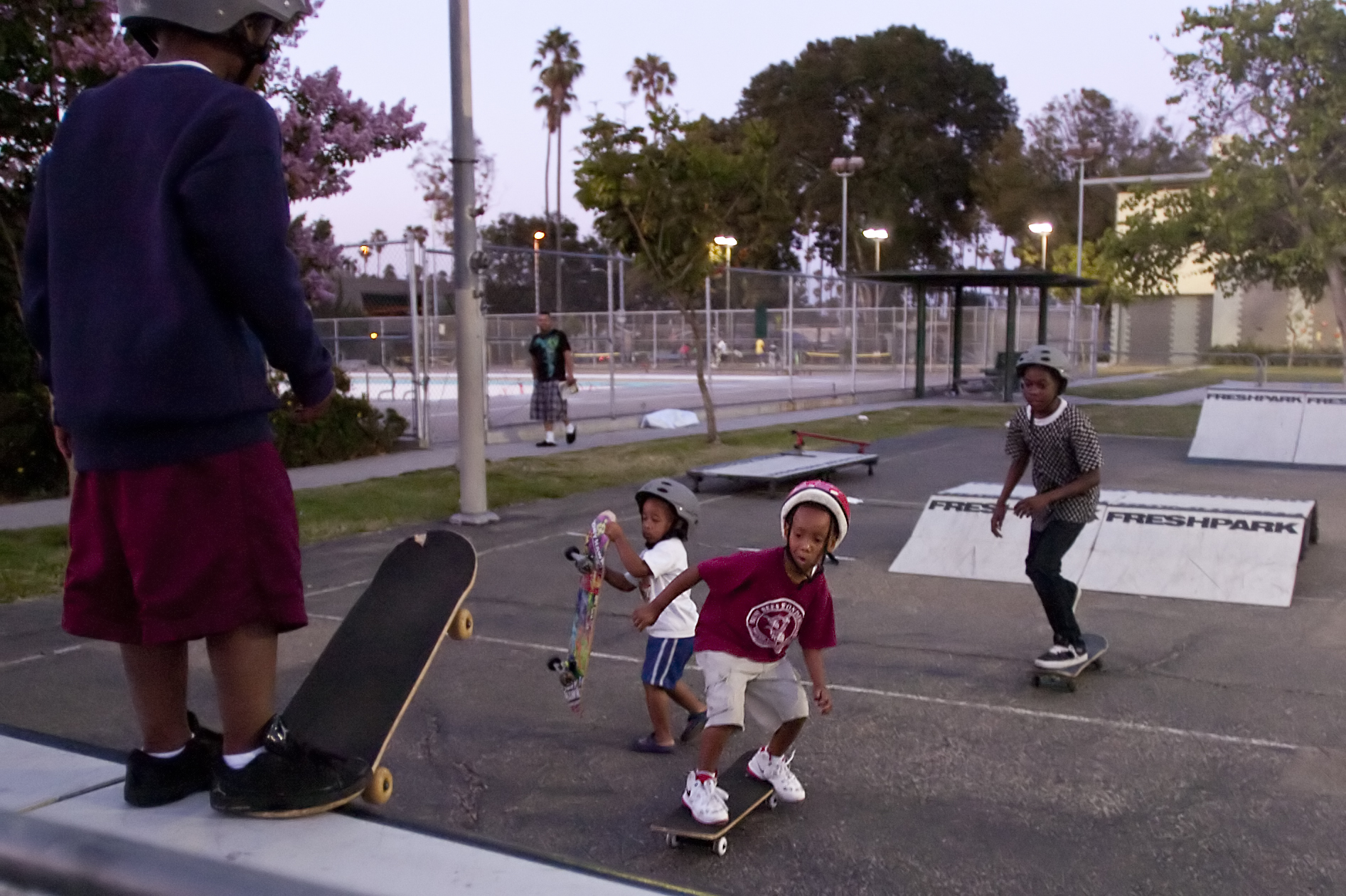 Clarification: The original version of this article was unclear as to when the shooting at Van Ness Recreation Center occurred. The shooting took place Wednesday night.

To build racket control and speed, a group of young children dashed to pick up their rackets in their first tennis lesson drills Friday night at Van Ness Recreation Center in South Los Angeles.

Around them, more children performed tricks on skateboards in a mini skate park, and older kids played basketball in a space that has been transformed by community volunteers in recent years.

One of these volunteers is recent UCLA alumna Jonesey Harp, who lives right down the street from the center. Later on in the night, she joins in to teach the group of tennis players a few tips in handling a racket.

“This is the way I am helping to level the playing field,” said Harp, who patterns her work after her role model, Ralph Bunche.

The program, which takes place Wednesday through Saturday nights, aims to keep at-risk youths off the streets by keeping parks open later.

SNL began in 2008 with eight parks and has since expanded to 32. Last summer, the program served 710,000 people, and this year it expects to reach the one million mark, Harp said.

That is the reason Harp became involved with SNL ““ a will to improve her community, she said.

Friday was the debut of Harp’s pilot tennis program. She applied for the grant and secured the funding.

“It wouldn’t be happening if it wasn’t for Jonesey,” said Diane Brooks, a United States Tennis Association tennis service representative.
Impressed with her ability as a volunteer videographer last summer, Deputy Mayor Romel Pascual’s office asked Harp to take the lead in finding funding to expand the SNL sports program to include tennis, Brooks said.
The tennis association pledged $5,000 to the SNL tennis program. The money will be used to implement the program at four parks this summer, and the association is at work finding matching grants for additional tennis sites, Brooks said.

In addition, USTA will provide volunteers to help train tennis assistants for the program. The funds will hire employees at $11 to $15 per hour to teach tennis lessons, Harp said.

Her program works into an environment that emphasizes keeping kids off the streets. In 2010, communities around parks involved in the program had 55 percent fewer gun shots fired, 57 percent fewer gang-related homicides and 45 percent fewer victims shot, according to the program’s website.

The program also includes activities, such as movies, singing, arts and crafts and jewelry-making. The tennis sessions are the most recent addition.

Jordan Dobbs, a 19-year-old student at Fullerton College, was riding around the park on a skateboard and talking to people. He recently moved back to the neighborhood and said he appreciates the diversion from gang violence and confrontations.

Both were commonplace in the park in the past, along with prostitution, said Patricia Flores, a 27-year resident of the community who did not feel secure in the former environment.
“It was terrible and dirty,” she said.

With the SNL program keeping the lights on later into the night, Flores said she feels better about bringing her children to the park. Her two daughters, who are 6 and 10, were playing kickball at the park on Friday.

On Thursday, the Flores girls were taking cooking classes and learning piano. The activities contrasted sharply with a shooting that took place at the park the night before.

Confusion in obtaining the new tennis rackets delayed the premiere one week. Next week, the program will be officially introduced, with loud speakers, lighting and a tennis party, Harp said.
Staff at the parks also receive interventionist training from the Los Angeles Violence Intervention Training Academy. They learn to teach kids about conflict resolution, goal setting and life skills training, said Billie Weiss, associate director for outreach and communications in the Southern California Injury Prevention Research Program in the UCLA School of Public Health.

Because SNL has proved very successful in the neighborhoods around the parks, cities across the country are wanting to replicate the program, Weiss said.

“It’s just a matter of keeping the parks open,” she said. “It’s a lot cheaper than incarcerating kids.”