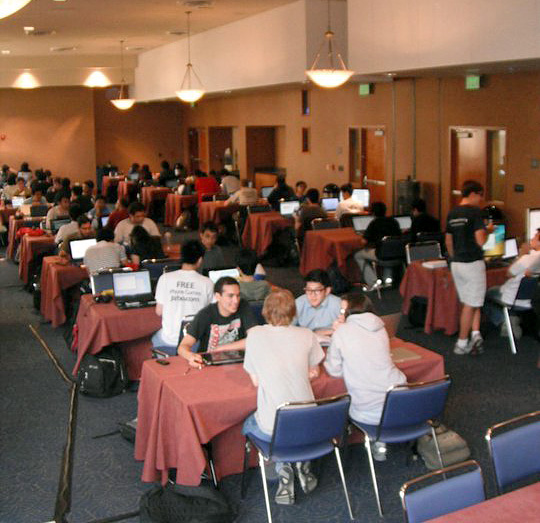 Correction: In the original version of this article, Seckin Can Sahin’s name was misspelled.

Even Facebook engineers said they thought the application would be impossible to create in 24 hours.

But the team, powering through the night with Red Bull and pizza, pulled it off and was awarded first place.

The hackathon began Friday night in De Neve Plaza. Hacking, despite its negative connotation, is defined as programming, or coding skillfully. A “hackathon” describes this marathon approach to developing an entire app overnight.

Twenty-one teams from UCLA and the California Institute of Technology participated at the event. Each team of two to four people had 24 hours to build whatever they wanted, and the remaining time was set aside for cleaning up, presentations and prizes.

“The applications were very impressive,” said Jenae Replogle, a university recruiter from Facebook. On-site engineers said the apps were some of the best hacks they had seen, she added.

A GPS-based application called PokÃ©mon Blue and Gold Version allows players to fight PokÃ©mon on the Intramural Field, heal them in the Arthur Ashe Student Health and Wellness Center and buy PokÃ© Balls in Ackerman Union.

“If you want to wish a happy birthday right at midnight, you can choose a friend, set a time, and say what you want, and Snipe will publish it on your behalf,” Terranova said.

The winning team, Funny Bone, which includes UCLA computer science students Song Zheng, Rajiv Makhijani, Seckin Can Sahin and Allen Wu, built an application called “Draw and See.” The app is a collaborative tool that lets multiple users draw on a shared canvas in real time while video and text chatting with each other.

Team Funny Bone didn’t agree on a concept until three hours after starting but finished the primary features of the program by 5 or 6 a.m., Makhijani said. Zheng said they were successful because they are all good programmers, and there was no overlap in each others’ work.

Facebook has held 24-hour hackathons for companies since its founding, but in the past year it has expanded to university campuses. The top teams from different regions will be flown to Facebook headquarters in Palo Alto, where their applications will be judged by Facebook executives in another 24-hour Hackathon in November.

According to Makhijani, Zheng is interested in interning at Facebook this summer, and Shahin has already secured an internship there.

“It was a long, tiring night,” Makhijani said. But, he added, it was all for fun.