Panel on connection between neuroscience and Buddhism proceeds without Dalai Lama 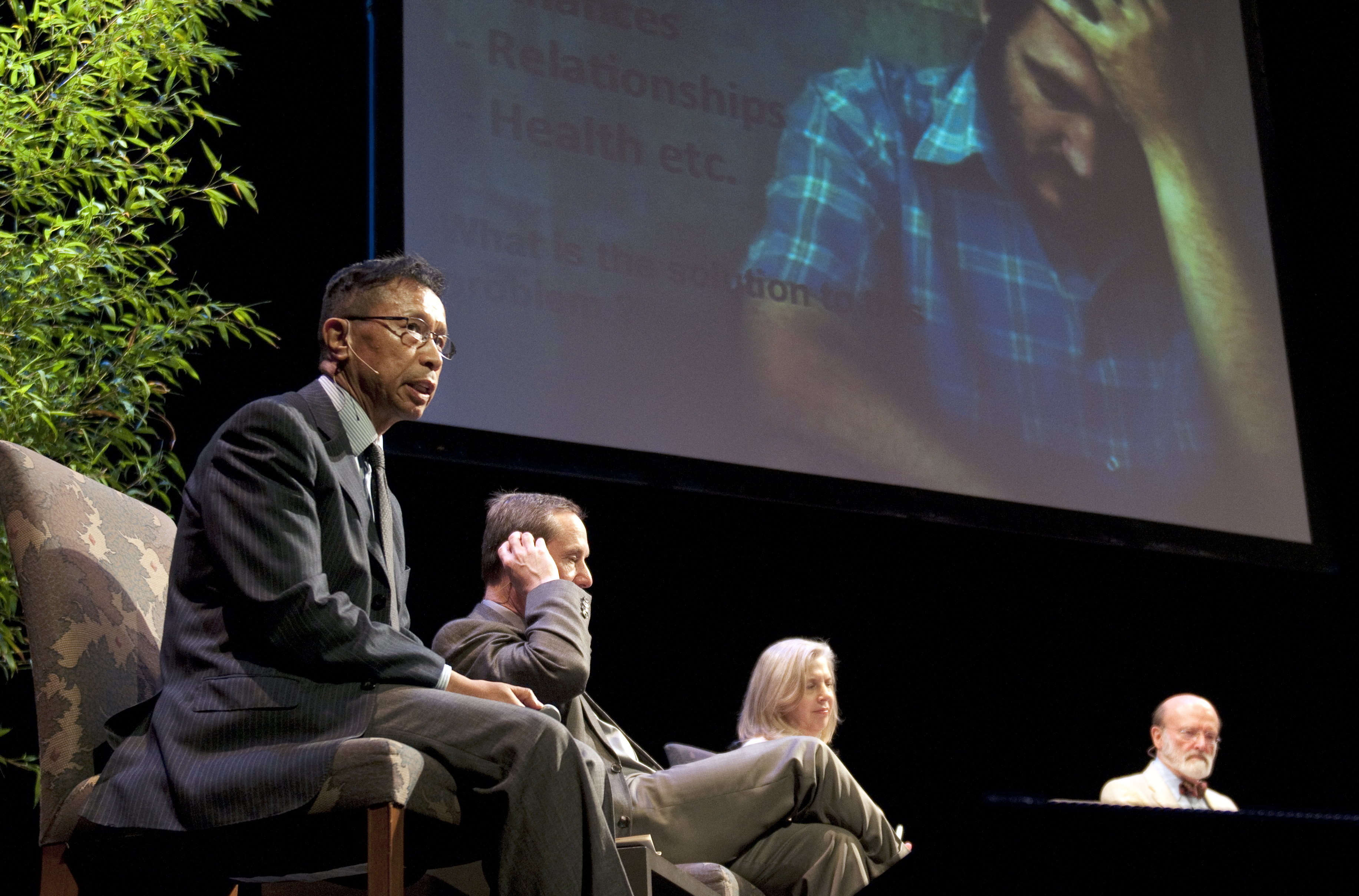 Panelists discussed the connection between neuroscience and Buddhism at the afternoon symposium, which proceeded without the Dalai Lama, who was scheduled to speak.

Read the rest of the stories from An enlightened approach

Scientific studies suggest that mindfulness can be beneficial to well-being

The show was sold out, but there were a lot of empty seats in Royce Hall on Monday afternoon.
After it was announced on Sunday that His Holiness the Dalai Lama would be unable to come to UCLA because of a sore throat, many ticket holders opted for a refund.

A lecture the Dalai Lama had planned to give in the morning was canceled altogether. An afternoon panel discussing the connection between neuroscience and Buddhism was still held, and two guest scholars agreed to fill in for His Holiness at the last minute. The panel also featured three UCLA neuroscientists, who presented on major findings in their field.

Not more than a third of the seats in the auditorium were filled, and those who attended expressed regret that the Dalai Lama could not come.

“Of course, we were extremely disappointed,” Trent Kanemaki said of himself and his wife, Jill.

The Kanemakis, both UCLA alums, drove to campus from their home in Fullerton. Having been raised a Buddhist, Trent Kanemaki said he was interested in hearing the Dalai Lama’s thoughts on the benefits of meditation. Still, he said he was looking forward to the panel.

As the event began, the audience tentatively applauded while Robert Buswell, director of the UCLA Center for Buddhist Studies, stepped to the stage for an introduction.

“We realize there have been some major changes in our program today,” he said.

But maybe there is a lesson or two to be learned, Buswell added.

“We don’t always get what we want … and things are sometimes out of our control that we have to accept as they are,” he said, pausing. “His Holiness has taught us that today.”
The audience laughed, and the panel proceeded.

Panelists answered questions about the benefits of meditation and how Buddhist teachings relate to topics like attention, compassion and creativity.

Susan Bookheimer, a professor of neuroscience, began by talking about how the brain models empathy early in life.

According to Bookheimer, there is a region of the brain that activates in a similar manner when behavior is observed as when it is performed ““ evidence that people internally mirror other people’s actions. Neuroscientists believe this could be the key to empathic behavior, which is a central concept in Buddhist teachings.

Another panelist, UCLA psychologist Lobsang Rapgay, spoke about his research on mindfulness, which is also a pillar of Buddhist philosophy.

Rapgay said mindfulness meditation has been associated with reduced anxiety and positive emotions, but until recently, researchers did not know why. Rapgay’s work suggest mindfulness works by broadening attention.

“The implications now are ““ how do you broaden attention?” he asked.

Panelist Thupten Jinpa, who serves as a translator for the Dalai Lama, commented on the consequences of science’s increased understanding of the physical underpinnings that define human emotion and experience.

“The question of mind-body connection comes up every once in a while,” he said. “People may hold different opinions, but that shouldn’t preclude us from collaborating and from looking at the specific components of mind.”

This was the take-away theme for many audience members, including Khen Rinpoche Geshe Lobzang Tsetan, a Tibetan Buddhist monk who was appointed by the Dalai Lama in 2005 as head abbot of India’s Tashi Lhunpo Monastery.

“The wonderful message is that science and Buddhism can work together through different methods,” the monk said.

There was no word on whether the Dalai Lama would reschedule his appearance, although he is expected to continue his tour through California, which will include a talk and panel at USC today and a dialogue at UC Irvine on Thursday.