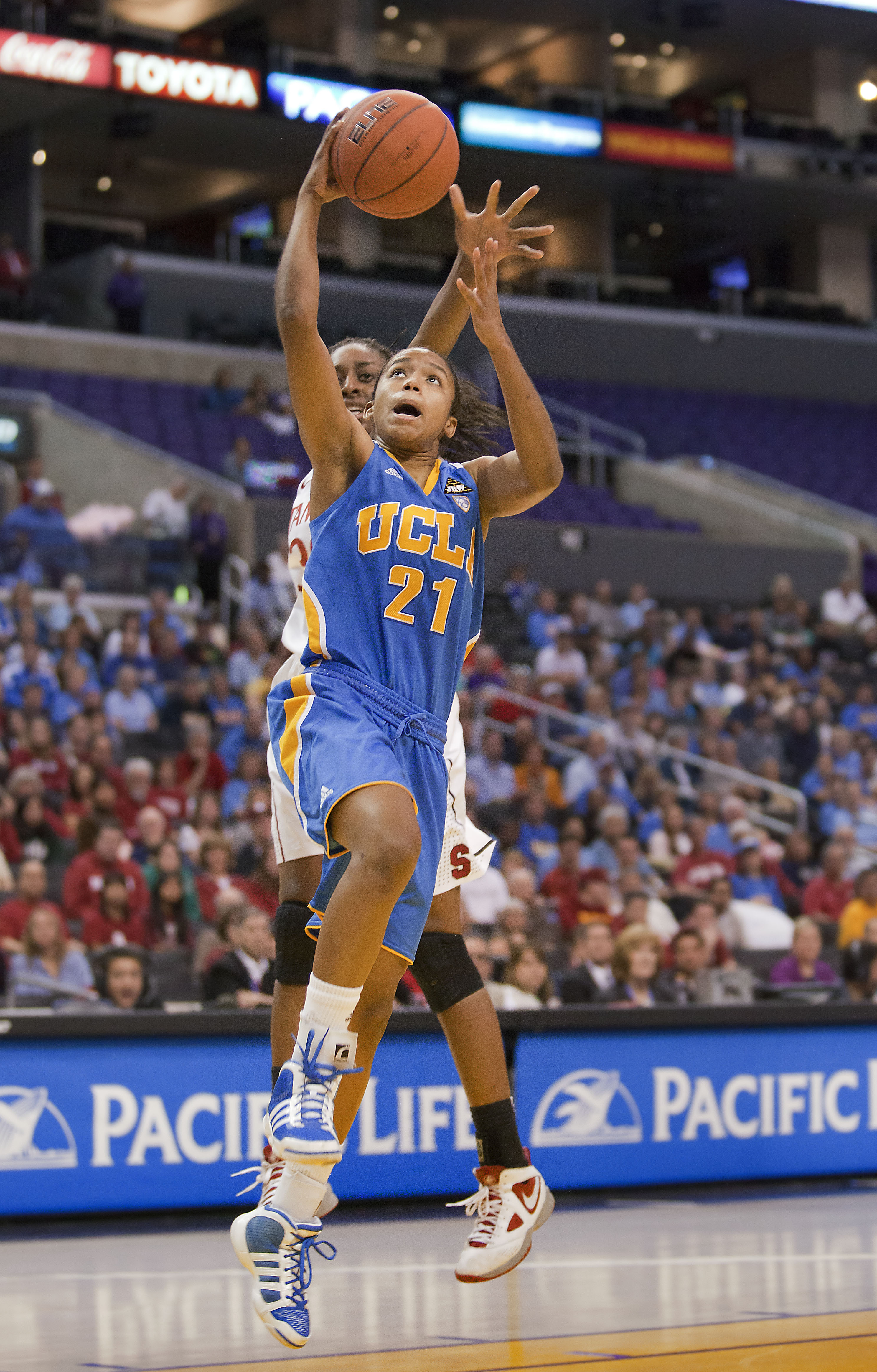 Senior guard Doreena Campbell led the Bruins with 16 points and 5 rebounds in Saturday’s Pac-10 championship game against the Cardinal.

It’s an old saying in basketball that you can either live or die by the 3.

With UCLA’s zone defense stifling the Cardinal post players, Stanford decided to put that adage to the test.

In a come-from-behind, 64-55 victory over the UCLA women’s basketball team, Stanford rode its guards’ shooting abilities down the stretch and got a few important rebounds to claim its fifth straight Pac-10 title.

No. 7 UCLA (27-4, 16-2) saw its 30-21 halftime advantage slip out of its hands after careless turnovers on which Stanford capitalized. UCLA had 11 turnovers in the second half alone.

The Bruins were still clinging to a 48-47 lead with 5:57 left to play when sophomore forward Markel Walker turned the ball over to Stanford freshman guard Toni Kokenis, who bolted down the length of the court and nailed a jump shot in the paint. The Cardinal got a stop on the other end, and Kokenis got an easy layup in transition to put her team up 51-48 at the 4:47 mark.Â

But Kokenis did not stop there; she went on a blistering run to score the next six Stanford points, tallying 10 total points during the stretch, to which the Bruins had no answer.

The dagger in the Bruins’ hopes of an upset win was, to no surprise, a pair of clutch back-to-back Stanford 3s that put the Cardinal up for good, 57-48.

“(Kokenis) knocked down some big shots for them. … Â The game doesn’t know your age, and she plays much more experienced than a first-year,” UCLA coach Nikki Caldwell said.

The game was not all easy buckets for the Cardinal. The opening 20 minutes saw UCLA play some of its most inspired ball of the season.

Senior guards Doreena Campbell and Darxia Morris, playing in their last Pac-10 Tournament, weren’t afraid to hit the big shots under the bright lights of Staples Center. The two traded off scoring for the Bruins and ignited the pivotal run that put them up at the half. Morris would end up with 12 points on 50 percent shooting from the field, and Campbell finished with 16 points, two assists and two steals.

“We were just mixing it up a little bit,” Campbell said. “We were just trying to go to the middle and see if we could get a couple of easy baskets there, then pull it back out.”

The Bruins also shut out the feared Ogwumike sisters for the entire first half, limiting Stanford’s dynamic duo to a combined eight points and six rebounds. It was quite the effort, considering junior forward Nnemkadi Ogwumike, who was named the tournament’s Most Valuable Player, had gone off for 32 points against Arizona the previous night.

But just like the last time these two played against each other, which resulted in a 67-53 Stanford win, the Cardinal saved its best for the second half.

Nnemkadi Ogwumike picked up the intensity and crashed the boards, pulling in six second-half rebounds and scoring 13 points in the final 20 minutes.

Ogwumike’s reinvigorated efforts on the boards, coupled with the outside shooting of both Kokenis and senior guard Jeanette Pohlen, sealed the game for the Cardinal.

UCLA junior forward Jasmine Dixon, who was mainly responsible for picking up Ogwumike down in the paint, held her own in the first half despite the size disadvantage and scored six points against the Stanford bigs. But the second half saw Dixon take zero shot attempts while grabbing five boards.

Afterward, Dixon had no comment about her lack of shooting other than to say, “I just don’t know.“Â

With the Bruins now eyeing a high seed in the upcoming NCAA tournament, the latest heartbreak loss to the Cardinal only reinforces the message Caldwell has been trying to instill in these Bruins all year long.

“Play for 40 (minutes),” Caldwell said. “I think this group did an amazing job, pretty much for about 32, 33 minutes of the game, and then there was the run, and you knew it was coming.”