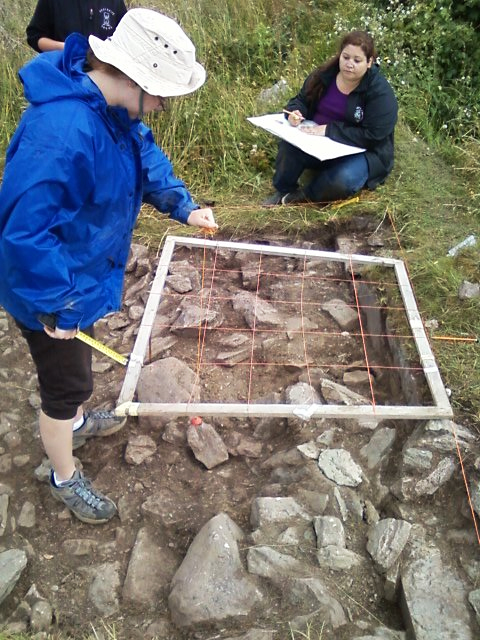 The UCLA Cotsen Institute of Archaeology recently closed its undergraduate field research schools for the year because of financial pressures.

Over the past few months, budget cuts and insurance risks have led to a deficit in funding for the program, which once thrived with more than 200 students enrolled and 20 sites worldwide.

The schools allowed undergraduates to participate in international research projects with archaeology professors and field experts for academic credit.

The Cotsen Institute will, however, likely offer three field schools this summer for volunteers, but not for academic credit. Institute Director Charles Stanish is also currently looking to re-establish the field schools next year through the summer sessions program, instead of through the UCLA International Education Office’s travel study program.

Shortly after Gov. Jerry Brown announced his plan to cut $500 million from the University of California system this January, the university announced that it would be keeping $150,000 of the money that the university owed to the institute, Stanish said. The money was to be returned in March.

State funding for the institute peaked at $450,000 in 2006, and has been steadily declining ever since, said Gregory Areshian, assistant director of the institute.

Last year, the institute received only about $200,000 from the state. This forced Stanish to lay off several staff members, including the director of international research, who helped organize the field schools.

Stanish said he had to use funds to pay the remaining staff, leaving less money for field schools.

Now, more than $400 from each student’s tuition must go to pay for the UCLA IEO administrative costs.

The university also increased the “return-to-aid” fees, or the amount of tuition that is redistributed to student financial aid.

The amount for overhead and return-to-aid fees could not be confirmed by the UCLA IEO.

Hadyn Dick, executive director of the UCLA IEO, declined to comment and would not provide a breakdown of where tuition goes in the program.

The only way the institute could raise sufficient funds to continue would be to increase tuition to more than $5,000 per student, Stanish said. But the institute has rejected this option.

“We could raise tuition, but as a public university, that would defeat our mission. The university is an engine of social mobility,” Stanish said. “We don’t want to turn around and become an elitist program that excludes low-income students.”

By next year, the Cotsen Institute hopes to re-establish the summer field program under a new structure, Stanish said. This would keep tuition under the $5,000 cap and allow students to again receive college credit for the program.

The program will maintain its academic quality, but it will lack the “intellectual luxuries” offered in the previous format, Stanish said.

Under the new system, the institute is only permitted to charge a “lab fee,” used solely to fund fees for direct instruction, not research expenses, lecturers or trips.

This summer, students who wish to participate would have to pay for all travel fees, except insurance costs. Stanish said the programs will most likely take place in China, Panama and Peru if they are approved by the UCLA Office of Academic Planning and Budget.

Amber Marie Madrid, a fourth-year anthropology student and vice president for the UCLA Biological Anthropology Society, said that many disappointed students have approached her with concerns about the program’s closing.

“At a research university like UCLA, you expect to have plenty of research opportunities, so to see this program affected by budget cuts is upsetting, to say the least,” said Madrid.

Madrid is also a board adviser to the UCLA Undergraduate Anthropological Association. She attended a field school program in Ireland last summer and said the experiences heavily influenced her choice to pursue a career in archaeology.

Out-of-state student Lexy Hartford said the caliber of the field program contributed to her decision to attend UCLA.

“Now I feel like I’m paying a lot of money to attend a school that doesn’t offer me the opportunities it once promised,” said Hartford, a second-year anthropology student.

Madrid said many club members have approached her with questions about finding other field-school alternatives. To address these concerns, the UCLA Undergraduate Anthropological Association and Biological Anthropology Society are hosting field-school workshops on Feb. 15 and Feb. 17, respectively.