A unique opportunity to see starry skies in L.A. 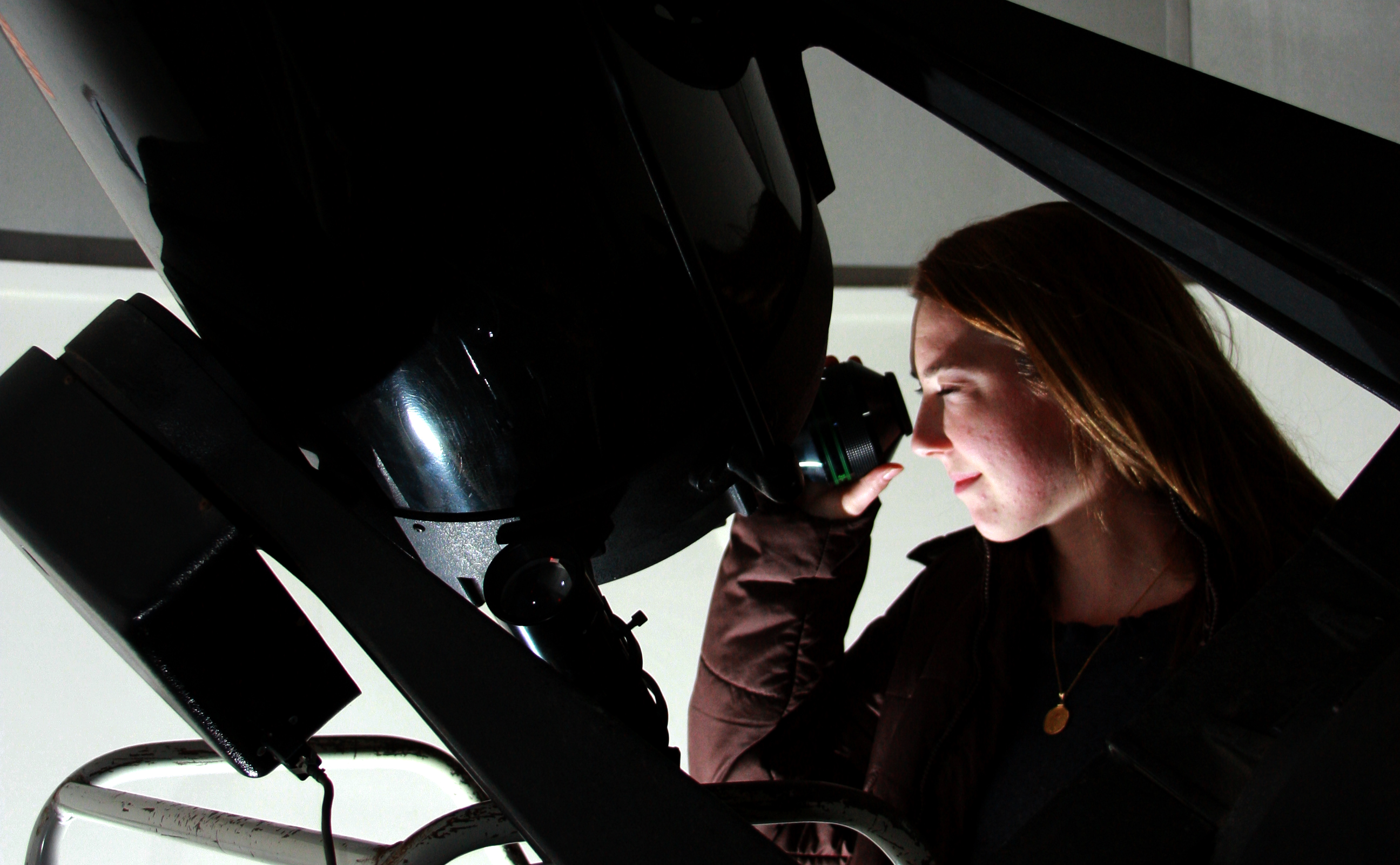 Kristen Bennett, a fourth-year astrophysics student, gazes through the telescope on a hunt to see Saturn on Wednesday night on the roof of the Math Sciences Building.

Los Angeles is not known for starry night skies, but that doesn’t stop student astronomers from gazing through the haze.

Every Wednesday at 8 p.m., members of the Undergraduate Astronomical Society hold sky shows, where anyone can come and view stars through one of the massive telescopes that sits atop the Math Sciences Building.

“I think it’s really cool that UCLA has something like this, where you can go see stars and nebulas in L.A., where there’s so much light pollution,” said Kristen Bennett, a fourth-year astrophysics student and president of the astronomy club.

The free planetarium show happens rain or shine every Wednesday at 7 p.m. Each week, an astronomy or astrophysics graduate student gives a presentation using a projector that simulates the night sky on the inside of the dome.

“People love the planetarium,” said Sarah Nagy, a fourth-year business economics and astrophysics student and vice president of the astronomy club. “I’ve never been to a planetarium show where the lights go on and stars appear on the ceiling where people don’t “˜ooh’ and “˜ahh.’ There’s never a silent crowd.”

After the planetarium show, visitors can go up one floor to see some real stars at the sky show. This time of year, people who come to the sky show can see the Orion Nebula as well as Jupiter and its moons, said fourth-year astrophysics student Barret Schlegelmilch.

“Some people look through the telescope and get really excited,” Nagy said. “Many have never had the opportunity to look through such a big telescope.”

Members of the astronomy club use the 14-inch Schmidt-Cassegrain telescope that resides in one of the big beige domes on the ninth floor roof of the Math Sciences Building. Operating the telescope, however, is not as easy as it used to be.

Students used to be able to input coordinates to find a star or planet. But the tracking system broke, and the physics and astronomy department did not fix it, Bennett said. Now the telescope operators have to use a control pad like that of a video game controller to find stars.

Without the system’s tracking device, telescope operators like Schlegelmilch find stars and planets using the wider-angled finder scope on the side of the telescope.

The astronomy club relies on the one telescope during the sky shows, but when there are a lot of people, the students set up a smaller telescope on a tripod, Bennett said.

They are currently working on adding another large telescope to their lineup as well, which earth and space sciences Professor David Paige donated to the club last quarter. But before they can use it, they need to build a mount for it.

“It’s huge ““ at least 10 feet long,” Schlegelmilch said. “Last quarter, we dragged it up the stairs in the Math Sciences Building because it wouldn’t fit in the elevator.”

The telescope, which took five people to haul up the stairs, now lies in the dome on the ninth floor roof, where the club members will work on their yearlong project of building a mount for it.

Students in the astronomy club are the only undergraduates who have access to the dome, which means they have to fix any problems that arise. Last quarter, one of the fuses broke, preventing the astronomers from closing the dome, Schlegelmilch said.

“That was pretty intense because that telescope is thousands of dollars, and even a little water could screw up not only the electronics but the optics as well,” Schlegelmilch said.

The telescope remains in working order so that the public can look through it every Wednesday of the quarter. Sky shows become more crowded, however, during the end of the quarter, when many Astronomy 3 students come to get extra credit, Bennett said.

“I definitely recommend that students come out at least once before they graduate,” Schlegelmilch said. “It’s a great opportunity to see things that they couldn’t normally see with the naked eye from L.A.”