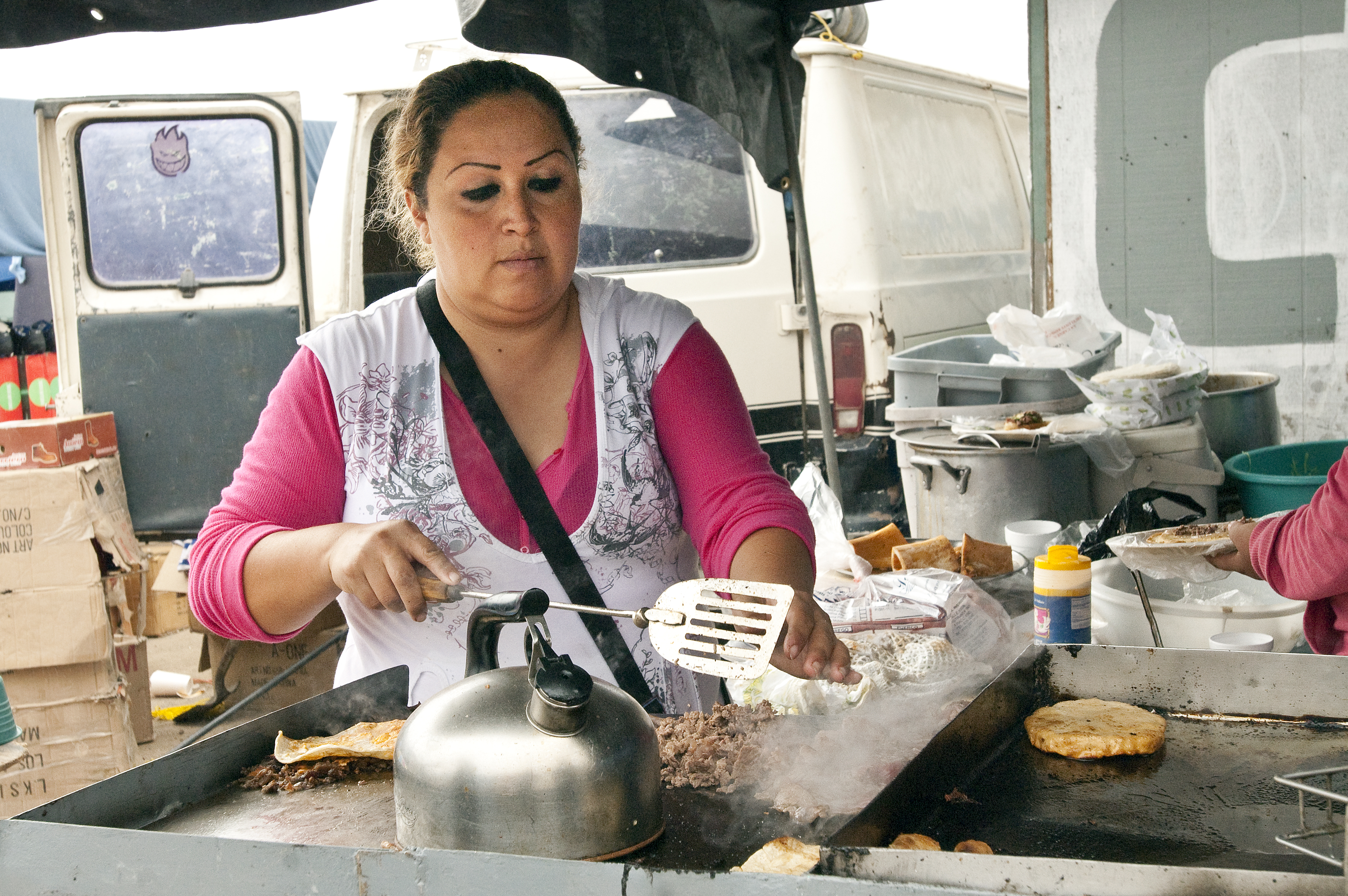 Elida Juarez, 30, prepares the beef for tacos at Antojitos Mexicanos, a family-owned food stand in the market in Maclovio Rojas. Juarez is a resident of a nearby town and has been working at her family’s restaurant for 10 years.

For more stories and videos on this topic:
>“Barriers Across the Border”

MACLOVIO ROJAS, MEXICO “”mdash; The local market was emptier than usual, but even in the light rain, there was still a line of people waiting to be seen at the makeshift clinic.

Staffed by UCLA students, it is one of the only sources of medical help in Maclovio Rojas, a town just southeast of Tijuana, Mexico.

The students are part of UCLA’s Fellowship for International Service and Health. They cross the border a few times each quarter to provide basic medical services, such as testing blood pressure and giving nutritional advice to locals who may not have access to care without them.

“We need these students a lot. It’s really necessary because a lot of people don’t have the money to pay for services. (The students) coming out lightens the load,” said Isidro Sunza, a resident who has visited FISH’s clinic before.

Maclovio Rojas, which was founded in 1988 on unoccupied land, only recently obtained running water and electricity in certain areas. Many residents tap into the local aqueduct and, dangerously, to main electrical poles to access these resources.

The area is not recognized by the government because the settlers came without the legal title for the land. The lack of services has inspired a culture of activism among the community leaders to build an infrastructure for the town and to gain recognition.

Unemployment is high, despite the nearby Hyundai factory, and resources from money to nutritional food are scarce.

Many of the brightly colored houses lining the dusty streets of the market are built from recycled garage doors and any wood locals can find after they secure a portion of land.

The nearest doctors are in Tijuana, and many residents cannot afford to pay for a visit, leaving them with sick children or untreated conditions, including hypertension or diabetes.

“Maclovio’s a community with a lot of problems,” said Ruth Rivera, who has lived there for six years.

She came to the clinic for the first time to get her children’s heights and weights and to make sure they were healthy. Rivera said she tries to feed them fruits and vegetables, but it’s not always possible to find healthy food.

It’s especially difficult, Rivera said, because she is pregnant and has no extra money to spend on vitamins or special food for herself.

“If you’re the only one in the house not eating spicy food, you have to find your own food. It’s more expensive not to have the regular diet as your family,” she said.

The difficulty of finding affordable, healthy food in low income areas is one of the contributing factors to the increasing rate of obesity among Latinos, said Michael Rodriguez, vice chair of research in the UCLA Department of Family Medicine.

“Sometimes (fruits and vegetables are) more expensive, so when you have a limited budget, and limited time, the choice is to go for higher caloric intake,” he said.

Obesity leads to additional health problems including diabetes, cardiovascular disease and blindness, many of the conditions FISH students test for at the Maclovio Rojas clinic.

Rosario Davila Rodriguez, a resident of Maclovio Rojas for two years, said diabetes is common among her family members. Some have gone blind from it because there are no medical services available to them and it’s difficult to provide the proper diet.

“You not only see (these problems) in the U.S., you also see it in Mexico, the same phenomenon is on both sides of the border,” said Rodriguez, who has partnered with local clinics and communities to combat Latino health problems in Los Angeles.