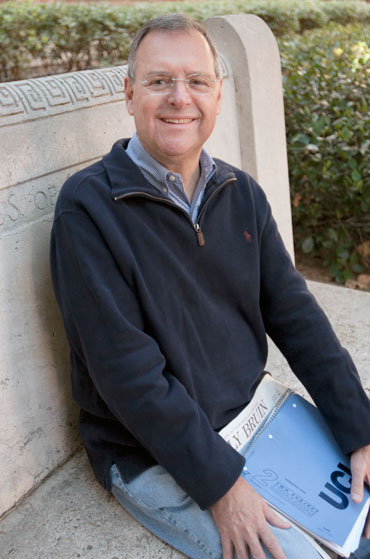 Bob Ross moved to California for his family, but chose Westwood for the university. Over his past four years at UCLA, he has rarely missed a lecture, yet he’s never taken a test or turned in an essay.

Now retired, the Penn State alumnus takes courses with undergraduates through Senior Scholars, a program offered by the UCLA Center on Aging.

Ross, 66, has always been motivated. He graduated with a degree in business administration and then worked as a retail executive in New York City, which left little time for liberal arts courses outside his major or for anything more than an occasional trip to the theater.

Each quarter, Ross said, he reads the course catalog cover to cover and has taken 25 classes so far, on subjects ranging from Chinese history to the American motion picture.

Senior Scholars aims to keep older adults mentally engaged, which improves the quality of their lives, said Gary Small, director of the Center on Aging. The program is also meant to give undergraduates a multigenerational perspective and to open UCLA to seniors in the community, he said.

Older adults learn differently and can enjoy their classes now that they’re not worrying about earning a degree, Small added.

For a small fee, the center helps about 100 seniors enroll as auditors each quarter, mostly in liberal arts or humanities courses, said Stephanie Frank, administrative specialist for the center.

In order for the scholars to audit a class, the center must get professor approval, she said, adding that they do not allow seniors to take labs and language courses.

“It’s an emerging community that hasn’t quite gone viral. It’s a jewel here at UCLA that is rapidly growing,” Small said.

Art Lambert, 82, discovered his love of philosophy at UCLA as an honorary alumnus. After he graduated from Syracuse University, Lambert taught mapmaking for two years during the Korean War and then worked as an engineer. He started taking extension classes at UCLA in 1957, and began exploring the humanities courses he never took in college.

Without the pressure of tests, Lambert said he sifts through the information and makes his own conclusions about the material that interests him, rather than learning everything the professor teaches.

Political science professor Deborah Larson said the events covered in her courses, such as the Vietnam War, are part of the Senior Scholars’ personal history, while the history is more abstract to undergraduates who did not live through it. Because they experienced events from the outside, the auditors are interested in learning why things turned out the way they did, she said.

Both Ross and Lambert said they don’t often participate in lecture because they are guests in the students’ class. Lambert said he occasionally asks questions if he feels they are relevant, but only after students have the opportunity to do so.

“There’s a balancing act there as an auditor. I try to stay out of the way of the professor-student relationship. They’ve got work to do, and the students have to learn,” Lambert said.

However, students often take notice of their older classmates and extend invitations to study groups. Ross said he enjoys chatting with the undergraduates sitting near him prior to class, and said former classmates often recognize him on campus and say hello.

“(The Senior Scholars) show undergraduates that … learning doesn’t stop when you get a degree. It’s worthwhile to learn a subject even if you don’t get a job from it, just to enrich your life,” Larson said.