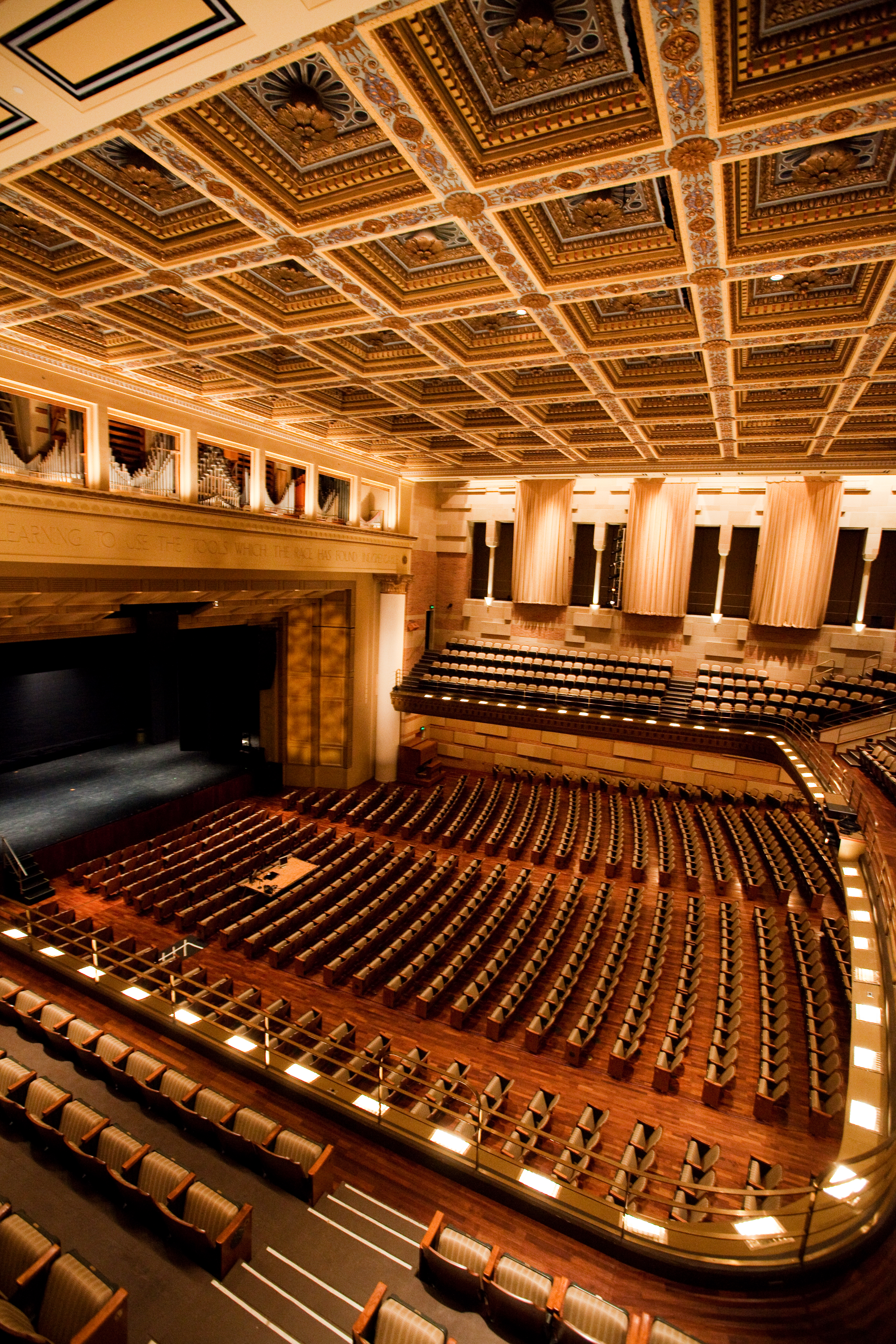 A look at Royce
The auditorium ceiling in Royce is similar to the eighth-century the Santa Maria Maggiore church in Rome.
The building's iconic facade was adapted from the Basilica of Sant'Ambrogio in Milan.
The polychromatic patterns decorating Royce's exterior mirror those found on churches such as the Basilica of San Frediano, the Basilica of Sant' Ambrogio and the Duomo in Florence.
source: "Transformations on the Prime Object: Royce Hall and the Lombard Romanesque Mode," Barton Phelps
compiled by samantha schaefer.

If the temperature’s right, walking through Royce Hall’s arches and down the rose-colored and terra cotta corridor is like stepping into 11th-century northern Italy.

Modeled after the exterior of the Sant’Ambrogio church in Milan, Italy, Royce was one of UCLA’s four original buildings in the 1920s.

Local architect David Allison was charged with creating a building to distinguish the new institution from its mother campus at UC Berkeley.

Complete with sprawling murals of the golden ages of human history, its greatest thinkers ““ among them Plato, Aristotle, Kant and Einstein ““ on the outer ceilings and the seals of 12 great European colleges, everything about the design reflected the early hope that UCLA would have a tradition of intellectual excellence.

Royce and the College Library’s respective designs are comprised of elements from a number of Italian structures, though the portions adapted from Sant’Ambrogio are the most identifiable. Royce’s facade and Powell’s rotunda are both modeled off the church, said Barton Phelps, the architect hired for Royce’s renovation after the 1994 Northridge earthquake.

Initially meant to house classrooms, offices and a large lecture hall, Royce was not built with a theater in mind, he said. The auditorium was built as a square, a poor design for acoustics, though the original wall texture and finishes were developed by then-professor Vern Knudsen, an acoustical physicist, to ensure the sound quality was the best around.

“It was not meant to be a concert hall, but we had to make it what it had already become. Campus buildings have more than one life; they get reinterpreted,” said Phelps, whose firm has worked on several renovations at UCLA.

The first performers in Royce were limited to students and faculty. Ernest Moore, the first chancellor of the new university, wanted the theater to echo Greek tradition ““ entertainment by the people themselves, said James Klain, who managed Royce from 1947 to 1984.

After Moore retired, UC President Robert Sproul created a commission on theater and drama during his interim year as chancellor, which brought outside cultural events to campus.
Those were the days when there was no theater arts department, and there was only one other auditorium in Los Angeles, Klain said.

True to its architectural beginnings, the hall attracted performers from all over the world.

Some of the earliest speakers included Albert Einstein and Eleanor Roosevelt, expanding to up-and-coming international performers such as Luciano Pavoratti.
Royce’s cultural programming, now called UCLA Live, grew over the next decade with increased marketing of the hall.

“As a venue, it is gorgeous. The acoustics are not good for spoken drama, but they are marvelous for music. During the time that I was managing it … virtually every artist in the world played (at Royce),” said Klain, who was commissioned by the university to write a book about Royce to help promote it to artists overseas.

In 1994, Phelps’ firm took a structural remodeling to the interior. The auditorium was taken apart and remodeled to reflect the external design, eliminating the three century jump to the Italian Renaissance style of the inner halls.

The auditorium’s acoustics were improved with the addition of 40,000 cubic feet to lengthen the sound reverberation of the room. Textured terra cotta and brick pieces replaced plaster walls to improve sound quality and maintain a consistent theme.
Red-and-gold-striped fabric was ordered to recover the theater seats, but was promptly sent back and replaced with milder tones after the taboo rival school’s colors were pointed out to architects.

Royce’s Italian Romanesque style is reflected throughout UCLA. From Powell to the recently built Anderson School of Management, the brick and warm tones tie back to the historic core of campus, Averill said.

Today, Royce is exactly the iconic building UCLA’s founders hoped it would be: a symbol of the university that carries a rich cultural and intellectual history.