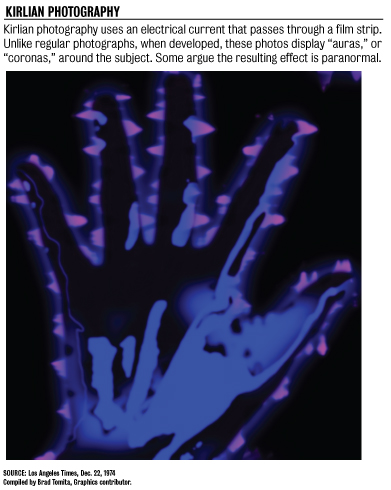 The phone calls would come in, and the voice on the other side would ask, “Do you believe in ghosts?”

This wasn’t a prank. It was an investigation of ghostly phenomena.

The year was 1968, and UCLA’s Neuropsychiatric Institute was the new home for a controversial type of research ““ parapsychology.

“It was a very exciting period of time. Things go in trends, and in the ’70s, there was a tremendous interest in parapsychology,” said Kerry Gaynor, a former research assistant. “We were getting calls and letters every day. We were hearing about this kind of phenomena from all around the country and all around the world.”

Unfunded by UCLA, the lab was allowed to operate in the NPI, now the Semel Institute, on its fifth floor. It depended on the work of a group of young volunteers under Moss’ tutelage, said Barry Taff, another of the lab’s former research assistants.

“We were a non-sanctioned entity,” Taff said.

This relationship often put the lab at odds with the university, which would eventually lead to its closure, Taff said.

Taff, who says he has psychic abilities of his own, began at the lab as a research participant. Later, he would run experiments with a “psi development group,” in which researchers would try to develop psychic abilities in otherwise normal people.

Taff and Gaynor also worked together to investigate about 500 reportedly haunted locations around the Los Angeles area.

After the lab received a call to investigate, the researchers would conduct a long psychological and personal evaluation of the subject to narrow the possibility of fraudulent claims, Taff said.

Many of the callers, he added, were only seeking fame and fortune by claiming they experienced the paranormal.

“No one likes these things to happen because it’s very destabilizing, traumatizing,” Taff said.

Gaynor said many of the team’s investigations involved sitting and waiting to document paranormal occurrences, and often nothing would happen.

But other times, amazing things would occur. Objects would move by their own volition, and anomalous lights would appear in the room, Taff and Gaynor said.

Throughout the 1970s, Moss taught Extension classes in parapsychology in Moore 100.

While UCLA Extension said records of its courses don’t go back that far, numerous classified ads in the Los Angeles Times archives indicated parapsychology courses were taught by Moss at UCLA and by Taff at other local college campuses.

Judith Orloff, an associate clinical professor in psychiatry at UCLA, came to the lab when she was 19 to volunteer. Orloff, who had experienced psychic phenomena of her own, said Moss allowed her to talk about these things when she wasn’t previously able to.

“She gave me permission to develop these things in myself,” Orloff said. “Thelma Moss was a huge influence on my life.”

Toward the end of her tenure, Moss developed an interest in Kirlian photography, a technique that measured the “auras” of a living being, Taff said. Many felt Kirlian photography’s effects were just a natural occurrence, Gaynor said.

As Moss delved into the field, the status of the lab took a turn for the worse, Taff said.
Moss stopped publishing in scholarly journals and dedicated most of her time to research that her colleagues said was beyond her area of study.

“You publish or perish … and that’s what happened to Thelma,” Taff said.

Taff then unsuccessfully applied for grants from UCLA to continue the lab’s research.

When Dr. Louis Jolyon West became chairman of the NPI, he walked into the lab and said that was the end.

“He didn’t believe in this stuff, and I don’t blame him, with all the garbage out there,” Taff said.

Shortly after the lab closed, Moss was terminated from UCLA.

While Moss was a mentor to her research assistants, others are more skeptical of her science’s validity.

One such skeptic is James Randi, a magician of 66 years, who investigates psychic claims to debunk them.

“I know a few things about how people are fooled and how people fool themselves,” Randi said. “The second being more important than the first.”

He had encountered Moss several times in the past and said her methods were susceptible to a magician’s tricks.

“She was very casual and pleasant and easy to get along with,” Randi said. “The problem is (parapsychologists) aren’t doing scientific research at all. They’re allowing the so-called psychics to run the game.”

His foundation, the James Randi Educational Foundation, offers a $1 million reward to anyone that can demonstrate paranormal phenomena in a controlled lab setting. And he’s prepared to send the account’s financial statements as proof.

“They’re always trying to sell you a balloon with a hole in it, and that’s not a very good deal,” he said.

However, Gaynor said parapsychologists have developed a very careful methodology in response to skeptics.

Moss was no exception.

“She was an amazing person,” Gaynor said. “She was brilliant and feisty and willing to fight for what she believed in.”