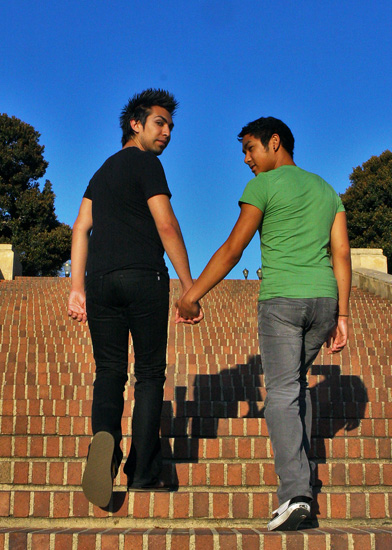 Fifth-year history student Peter Rodriguez and third-year nursing student Jason Bernabe have been in a relationship for nearly seven months.

Jason Bernabe was just another shopper when he stepped through the doors of his hometown’s local mall, but he felt stares from all directions.

His fingers stiffened and slid from the clasp of his boyfriend, fifth-year history student Peter Rodriguez. Neither had to speak to know that they had to stop holding hands.

“People will stare at anything they don’t see on a normal basis,” said Bernabe, a third-year nursing student.

Though he and Rodriguez have been dating for nearly seven months, Bernabe, who has been openly gay since age 18, said they sometimes feel uncomfortable in public, as their same-sex relationship has not been given the same marriage rights allowed to opposite-sex couples.

Yet the situation took a turn Wednesday, when Proposition 8 was suspended in a ruling by U.S. District Chief Judge Vaughn Walker.

When the decision was announced, phones buzzed of joy and excitement amid the couple’s group of friends.

“It was such a shock,” said Rodriguez, who said that he did not imagine the government’s position would ever change. “I’m relieved, but the battle’s still not over.”

For Bernabe and Rodriguez, the decision was a victory, a step toward their complete recognition as full citizens of the United States, they said.

“In high school, I was actually really against gay marriage,” Rodriguez said. “”˜Marriage is a religious thing, so why doesn’t the LGBT community just do their own thing?’ Now I see all the privileges of marriage and the benefits we were denied.”

According to Dr. Peter Kassel, training director for UCLA Counseling and Psychological Services, public perception often determines people’s view of themselves and creates a false or discouraging self-image.

“When the LGBT community is demonized in public campaigns and considered “˜sinful,’ it’s destructive to the way they see themselves,” he said. “People in the LGBT community have elevated rates of depression, anxiety and negative thoughts on the value of life.”

Furthermore, the lack of public recognition of same-sex marriages may keep partners from taking their union seriously, Rodriguez said.

“The LGBT community has bad connotations for being promiscuous, and it’s because we don’t have a legitimate marriage, making it so much easier to leave,” he said.

Yet even when members of the lesbian, gay, bisexual and transgender community feel confident in their identity, they face judgment from strangers around them. Besides the uncomfortable stares Bernabe and Rodriguez get from passersby, Rodriguez said they have been hurt by other students simply for their love for each other.

“I was walking home from a frat party with Jason one night, and (people in) a frat house across the street threatened me,” he said. “People’s views can make you feel unsafe sometimes.”

According to Kassel, the social stigma against the LGBT community has to change in order for same-sex couples to feel safe in society.

Rodriguez ““ who identifies himself as pansexual or attracted to people regardless of their gender or sexual orientation ““ said he first realized his love for both males and females when he was 11 years old. The realization that he was “different” morphed into a long-term struggle as he searched for his true identity.

Rodriguez said his internal battle continued into college, when his group of friends attempted to categorize and label his sexuality, and it was not until his third year at UCLA that he discovered his true sexual identity. He said he considers the 10-year search for identity his most difficult journey as a pansexual male, even more challenging than dating and embracing his sexuality afterward.

Experiencing struggles and living lifestyles different from the majority often discouraged the couple, who found that others cannot always understand and relate to them.

“UCLA was liberating; my peers have been so supportive,” said Bernabe, who did not inform his parents of his sexual orientation until he began going to college. “I’m the only boy in a traditional Filipino family, so my parents have a lot of expectations for me, some which I cannot fulfill because of my sexuality.”

Nevertheless, Bernabe said he hopes to one day marry another man and have a family with kids.

“Marriage is a definition that will change constantly,” he said. “It’s an error to compare one couple with another, to compare our love with an animal-human relationship.

“Our love may not be for the opposite sex, but we still have similar experiences of love.”

As they continue to fight their battle, both Bernabe and Rodriguez said they seek comfort in those who love and understand them, hoping that one day, everyone else will too.

“People tell me that God hates gays, but I know that God will love me no matter what; no one is any less of a person than anyone else,” Rodriguez said.

“Maybe 30 years from now, same-sex marriage will be a given, and we’ll be wondering why we were even fighting for it in the first place.”