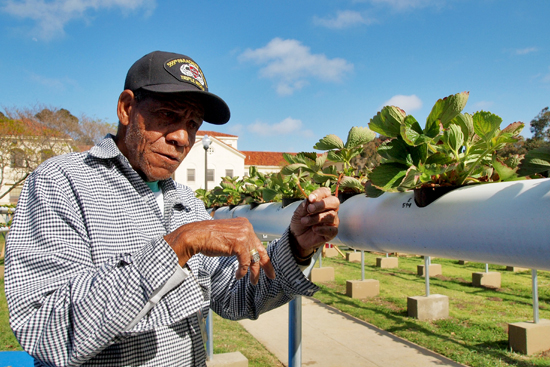 Veteran Bobby Shelton examines the strawberry plants in the pipes. The strawberries grow without soil and are watered through a solar power system.

Every morning Bobby Shelton walks outside and checks on each one of his fruits and vegetables: strawberries, cabbage and tomatoes ““ but that’s just the start.

He picks weeds, checks the water and looks for gophers. He’s 76 years old. And this farm is at the Veterans Administration Center, just a few blocks from the 405 Freeway.

Conceived by Lauren Bon, leader of the Metabolic Studio, in conjunction with the Greater Los Angeles Veterans Administration Healthcare Center, Strawberry Flag is an art installation in the form of a sustainable and reclaimed garden of strawberries, complete with music speakers, solar panels and stationary bikes.

For Shelton, who served in Korea and Japan, Strawberry Flag is his job as part of the VA’s Compensated Work Therapy program.

“Gardening is in my blood, because I was raised on a farm,” the Arkansas native said. “For me now, it’s a recreation. Instead of going to some senior citizen place and playing dominoes, I am up and about.”

His work in the garden takes eight hours a day. Whether it’s nursing damaged plants in his “special care unit” or composting trash for his worm bin, Shelton is staying active on the VA grounds.

As an art installation and a gardening system, the Strawberry Flag is elaborate as it is aesthetic. Built over an unused part of the VA’s large campus, the sculpture has introduced color, namely blue surfaces, red fruits and white pipes.

The 13 white pipes are part of an irrigation mechanism that starts with water going through a cleansing bin of fish. From there, the water is pumped into the pipes, powered by solar-powered bikes.

All of the water comes from the Los Angeles River, and all of the plants are reclaimed from abandoned farms and lots.

In between gardening, Shelton and others take cycling classes on the bikes to keep the whole system going.

“I like working with people and doing something for the veterans. A lot of people who went to serve got all messed up, and some didn’t make it back or didn’t make it in once piece, and I think it’s my duty to reach out to them,” Shelton said.

Los Angeles has one of the largest veteran populations, many of whom are without homes, said Kelli Quinones, one of the on-site Metabolic Studio coordinators. The studio wants to educate the public about such issues.

“Most people have no idea (about the VA),” Quinones said. “The vets need so much, and it’s nice that we can open up the eyes of the public.”

Just a few buildings behind the UCLA Jackie Robinson baseball field, the Strawberry Flag allows the public to explore the VA’s historic campus and interact with people like Shelton.

For Laura Healy, one of the other coordinators, working with veterans helped her understand her own father’s war experiences better.

“This is a true culture of cultivating community and letting everyone take part,” Healy said about the afternoon tea sessions.

The seasonal high tea celebrations also allow the group to sell their Veterans Preserve jam and the Strawberry Gazette, a veteran-and-studio-produced newspaper. The proceeds go back to the veterans at the hospital.

Strawberry Flag takes on these issues for veterans ““ whether it’s homelessness or health care ““ through their newspaper, radio and music. Each strawberry pipe is equipped with speakers that play custom-made music and radio pieces with the voices of army members currently in Iraq and Afghanistan.

The next high tea ceremony is planned for June 10 as the Strawberry Flag celebrates its first year at the VA.

The Metabolic Studio is not sure when it will leave, but it’s not staying for long.

“At the end of the day, it’s still an art installation, and there’s only so much influence that any art piece can have. And when it runs its course, we move on,” Quinones said.

But for Shelton? His grandchildren will be visiting come Independence Day, and he hopes they can continue to visit some kind of permanent garden. In his own words, “Strawberry Flag forever.”