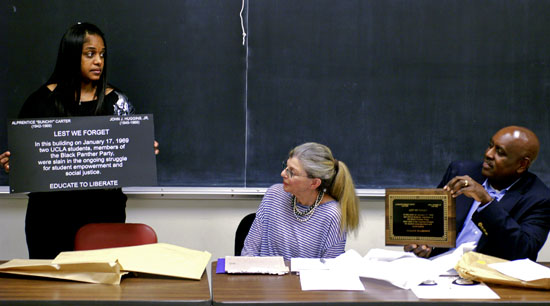 In Campbell Hall 41 years ago, two UCLA students and members of the Black Panther Party for Self-Defense were murdered.

Ever since that day, Jan. 17, 1969, various attempts to put up a plaque commemorating the deaths of Alprentice “Bunchy” Carter and John Jerome Huggins Jr. have emerged. None have succeeded.

“It’s as if it never happened, and that’s just wrong. It did happen, and it’s a tragic, tragic part of this institution’s history,” said Mary Corey, a history lecturer at UCLA.

The 16 students in Corey’s capstone seminar on 1960s activism have worked throughout this quarter to remind the campus of the shooting that occurred in room 1201 ““ then a small cafeteria, now home to an Academic Advancement Program’s math and science tutorial.

Today the seminar, also known as the Memory Project, will host a ceremony to unveil two plaques in memoriam of Carter and Huggins. One will hang outside room 1201A. The other will be installed on the outside of Campbell Hall after the UCLA administration ensures the plaque adheres to its architectural standards.

The students taking the seminar are unsure when the plaque will go up.

“I see this plaque as a wonderful opportunity to remind us that we can be part of transformation in our own world.”

Carter and Huggins were admitted to UCLA in 1968 under the flagship High Potential Program, a precursor to AAP.

In September 1968, the search for a director to lead the newly formed Afro-American Studies Center was renewed after the primary candidate backed out. The center is now the Ralph J. Bunche Center for African American Studies, said Daniel Johnson, founder of High Potential.

Ron Karenga, the founder of black nationalist group Organization US, lobbied Chancellor Charles E. Young to choose the candidate he preferred without a student vote.

At this time, the FBI was fueling tensions between the Panthers and Organization US in an attempt to undermine the Panther party, 1975 Church Committee hearings found.

A series of meetings to discuss the matter was held in January 1969.

After an otherwise peaceful meeting on the 17th, Johnson said, Carter and Huggins were shot by Claude “Chuchessa” Hubert.

Johnson said he believes that the FBI played a part in the shootings, but added that even today, he is still uncertain about the details of what happened.

What is certain, he said, is that Carter and Huggins died as heroes.

“They died standing with students to oppose the takeover of the (director selection) process we were engaged in,” he said.

Those in Corey’s seminar believe it is their duty as student activists to acknowledge the shootings.

The students realized there was no concrete commemoration of the deaths at the beginning of the quarter.

They watched Everett’s documentary, “41st & Central,” which is about the Southern California Black Panthers chapter and covers the UCLA shooting. Then, several students in the course gave a presentation on the Panthers and, as part of their research, went to the site of the shootings.

“We thought, “˜This isn’t right, this is denying the entire university part of its history.’ From then on, we assigned people tasks, like looking up other plaques on campus, doing research on the event and the history of the shootings,” she said.

The Memory Project has worked tirelessly this quarter to ensure these plaques are installed, Corey said, adding that it is not unusual to receive calls from her students at midnight.

The seminar still manages to fit in discussions of weekly readings inside its Bunche Hall classroom, but its focus remains on adjacent Campbell Hall.

For the past several decades, the university has hesitated to make Carter and Huggins’ deaths visible, Corey said.

“If two white students were murdered in Campbell Hall, do you think there would be a plaque? If a plumber died of a heart attack in Haines who had worked for the university for 35 years? Plaque,” Corey said.

“We have to assume there’s something about them being Black Panthers in the mind of the institution that made (their deaths) hard to acknowledge.”

However, there has been an increased effort to raise awareness of the shootings over the past several years, Corey said.

A few years ago, there was a plan to look into creating a committee that would work on installing a plaque, said Charles Alexander, associate vice provost for student diversity and the director of the Academic Advancement Program. The committee never formed, he added.

Finally recognizing what happened could help UCLA reach out to a more diverse group of students, Corey said. Right now, the university does not attract many black students, she added.

“This campus does not have a reputation for being welcoming (to black students),” Corey said. “I think having this history acknowledged does something for the university: It opens the circle of “˜we’ to a larger circle.”