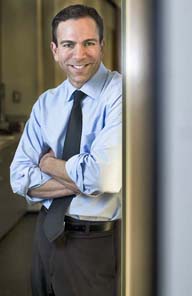 Few dentists can call themselves world-record holders, yet Dr. Bill Dorfman, a UCLA alumnus, dentist and one of this year’s Spring Sing judges, holds the title for most money raised for shaving his head.

Dorfman is likely a familiar face to reality TV junkies, having appeared on ABC’s “Extreme Makeover” and as a guest co-host on the CBS show “The Doctors,” where he achieved his record-breaking fundraising. Dorfman is a cosmetic dentist and is a founder of Discus Dental, a manufacturer of tooth-whitening products.

“UCLA was one of the greatest experiences of my life. The four years I spent there were a great period of growth for me,” Dorfman said.

Dorfman graduated from UCLA with a degree in psychobiology in 1980 and was a major voice in the campus community, graduating UCLA as the Outstanding Senior of his class.

Dorfman was a member of the UCLA Yell Crew and still maintains an active role in the UCLA Spirit Squad today, having judged the UCLA cheer tryouts for the 20th consecutive year.

Dorfman’s own involvement with the James West Alumni Center began during his freshman year at UCLA, when he received the scholarship that enabled him to attend the university. Ever since, Dorfman has made significant financial donations aside from his Spring Sing appearances and has served two terms as vice president of the Alumni Association board of directors.

As a Spring Sing judge, Dorfman joins a lineup of celebrities and entertainment icons, some of whom he counts among his patients.

“It’s fun for me because I get to bring my patients who don’t know a lot about UCLA, and they get to see an amazing show,” Dorfman said.

In previous years, Dorfman has judged with the likes of Janice Dickinson, Melissa Joan Hart and Jason Alexander. While this year’s judges remain a secret until the day of the show, Dorfman will join a star-studded lineup on the big night.

Kaisey is in charge of the process of recruiting alumni and celebrities alike to attend the event and judge the performers.

“We look for people that UCLA students would like to see, as well as people who are influential behind the scenes to give exposure to our performers,” Kaisey said.

A dentist may seem an unlikely choice for judging a music competition, but Dorfman explained that the arts are important to him.

“The arts are the parts of life that keep us sane and offer us all the beautiful things life has to offer. Spring Sing is an extension of that,” Dorfman said on the importance of his 25th year of involvement with the Spring Sing program.

Dorfman continues to enrich the UCLA community outside of the arts through his founding of The Leadership Excellence Accelerating Your Potential Foundation. LEAP is a summer leadership program on UCLA’s campus aimed at helping high school and college students develop life skills through celebrity seminars and mentorship programs.

“You can tell it has a special place in his heart. He would do anything for any of our students to make sure they are set for success,” said Trisha Santoro, director of the program.

The program works to motivate students toward success both inside and out of the classroom, hoping to improve their futures.

“We get to see the students grow and mature into young adults in just a matter of six days,” Santoro said. “They are sent back into the world driven to conquer their goals.”

In addition to his foundation, Dorfman works with the Los Angeles Battered Women’s Shelter and the Los Angeles Children’s Dental Center. Dorfman is also involved in international initiatives such as Tomorrow’s Trust to help children with AIDS in South Africa.

Together, Dorfman’s philanthropies earned him the 2009 UCLA Community Service Award in recognition of his significant contributions to the UCLA and greater Los Angeles communities.

“I may be a dentist, but I have the most eclectic career you’ll ever see,” Dorfman said. “None of this would have happened without UCLA.”