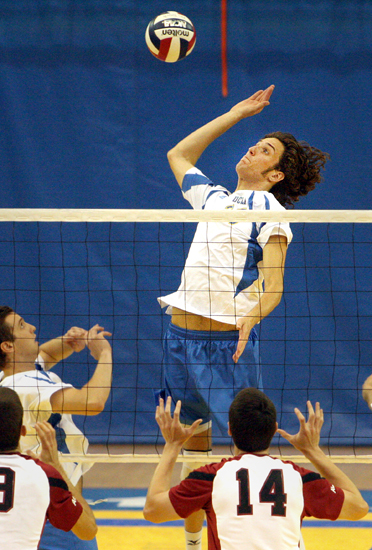 Sophomore quick hitter Nick Vogel spikes the ball during the Bruins’ 3-2 victory over Stanford Friday at Pauley Pavilion. The Bruins will advance to the MPSF quarterfinals even though they suffered a 3-0 loss to Pacific on Saturday.

Last weekend’s home stand proved to be a microcosm of the regular season for the UCLA men’s volleyball team.

After beating No. 1 Stanford in a five-set thriller Friday night, the Bruins were swept by Pacific on Saturday, giving the Tigers their first Mountain Pacific Sports Federation victory since 2008.

Coach Al Scates cited a lack of depth due to injuries as a potential reason for the letdown against the Tigers. Senior captain Garrett Muagututia left the match with a sprained ankle.

“It’s hard for us to play back-to-back (matches) when we go five sets the night before,” Scates said. “Thank goodness the playoffs are going to have a day’s rest between them because we’re a little thin right now.”

The loss marks the first ever to the Tigers in Pauley Pavilion and furthers a trend that the Bruins have followed this year: losing at home to less-than-stellar teams. The Bruins were also swept at home by then-No. 9 Long Beach State and then-No. 14 UC San Diego.

Scates did not think that his team was overlooking Pacific after beating Stanford the night before.

“We had a real emotional, tough match the night before and I think we were emotionally drained,” Scates said. “With three guys out, it’s tough to play that second game in a row when you go two and a half hours the first night.”

The Bruins hit for a measly .088 clip as a team and had three players finish with negative hitting percentages, denoting more errors than hits. Sophomore quick hitter Thomas Amberg, the only Bruin with a double digit kill count, led the team with 13. Pacific outside hitter Florian Gornick led the Tigers with 14 kills.

The Tigers dominated the net, finishing with 18.5 blocks to the Bruins’ 5.5.

Friday night’s win over Stanford marked the third time this season that the Bruins have toppled the nation’s No. 1 team, after knocking off Cal State Northridge twice this season. The win also coincided with a senior night ceremony for six Bruins, most notably, setter Kevin Ker and Muagututia.

“You get a little more juice when you’re playing on senior night because you want to go out playing well,” Ker said. “It was a great night.”

The Bruins hit for a whopping .900 clip in the fifth as opposed to Stanford committing four hitting errors for a .000 clip. The blocking battle also belonged to the Bruins on Friday as they out-blocked the Cardinal by five and a half. Muagututia led the way for the Bruins with 23 kills, followed by Amberg with 18.

Interestingly enough, Saturday’s loss did not end up affecting the Bruins’ seeding as they head into the MPSF Tournament. Win or lose, the Bruins would have ended up in seventh place, unable to catch up to No. 6 USC. With all of the matchups now set, the Bruins know they will be heading to Provo, Utah for a date with the two-seed BYU Cougars, a team that split two games with the Bruins at Pauley Pavilion in January.

Ker likes his team’s chances on the road against the Cougars.

“If you look at our record this year, we’re really good on the road,” he said. “We like playing in other gyms and we feed off of the other crowd’s energy.”

Muagututia agreed and said that he will embrace the underdog role heading into the playoffs.

Scates, citing earlier victories over top-ranked opponents, said that his team will be ready to play.

“We can rise to the occasion and beat anybody, we know that,” Scates said. “We’re going to go in there and play a real good team but we do well against real good teams.”