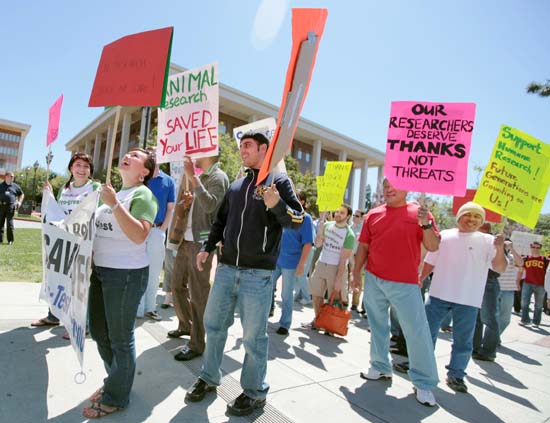 UCLA Pro-Test showed support for animal research on Thursday by marching up Westwood Boulevard toward Wilson Plaza. The rally concluded on campus with a series of speakers at Kaufman Hall.

Amid a sea of “Research Saves Lives” signs and “Pro-Science, Pro-Gress, Pro-Test” shirts, approximately 200 protestors from UCLA and the greater Los Angeles area marched along Westwood Boulevard on Thursday to show support for animal research.

Organized by UCLA Pro-Test for Science, the second annual rally marched to Wilson Plaza, where students, scientists and the public gathered to listen to speakers and chant the occasional “No more threats, no more fear, animal research wanted here.”

Pro-Test, an organization started in Britain in 2006, publicly supports animal research and condemns the use of violence against researchers by animal-rights activists.

“It is important to me because … all the people that are involved in research, who haven’t been necessarily affected by animal rights-related extremism … may very well be in the future if we don’t make a difference now,” Jentsch said.

While the rallies speak out against the attacks that have occurred on UCLA researchers since 2006, Pro-Test also aims to inform the public about their reasons for supporting animal research.

“Recent UCLA studies using animals has given us new insights into the diagnosis of treatment for cancer, autism, Alzheimer’s disease and many others,” said Executive Vice Chancellor Scott Waugh in a speech at the rally.

UCLA researchers, students and faculty were among the hundreds of protestors advocating for animal research who, despite coming out for different reasons, marched alongside each other.

“I participate in animal research, so obviously people threatening directly impacts the research we are doing, so it is important to show our solidarity,” said first-year psychology doctoral student Kimberly Beach.

Stephanie Groman, a graduate student in psychology, came out to protest as more than just a researcher.

“Amongst other reasons, my family has been afflicted with cancer, and both of my parents are survivors of cancer because of animal research done on chemotherapy treatments that have allowed them to live longer than they should have,” she said.

Despite the presence of counter-protesters at last year’s rally, including a man dressed up in a gorilla suit, this year’s march was comprised only of animal research advocates.

Jentsch cites the rallies as a reason for alleviated tensions between Pro-Test and animal rights activists.

“In the last year we have seen that there have been virtually no criminal activities perpetuated against scientists by animal rights extremists. I think that partially is related to our vigorous defense,” he said.

Open dialogue between researchers and some animal rights groups, such as Bruins for Animals!, has also resulted from Pro-Test, said Tom Holder, a leader of Speaking of Research and the original Pro-Test movement.

But there is still more work to be done to foster better relations between both sides.

“It is still a struggle. They still come to my house and scream obscenities to me and they still threaten my colleagues,” Jentsch said.

While the Pro-Test rallies are primarily contained to the Los Angeles area, the organizers hope to spread the rallies to other universities, Jentsch said.

“It doesn’t necessarily need to be a rally, but there needs to be some kind of level of education in places where animal rights activism is on the increase,” Holder said.

Pro-Test and members of UCLA said they will continue to advocate animal research and the safety of researchers through more rallies in the future.

“These studies are critical for the well-being of our society,” Waugh said in a speech. “Stopping or slowing progress in this area is not an option.”