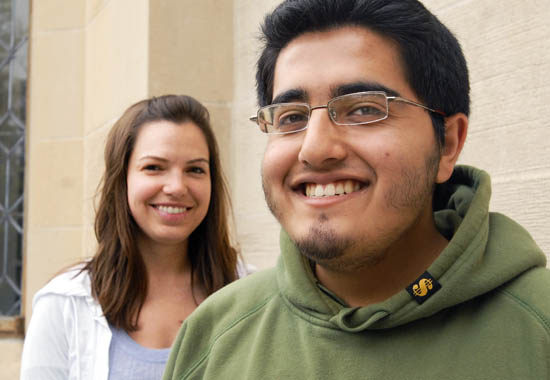 In light of the university’s decision to lay off faculty members throughout the college, students from Steve Peterson’s Communication Studies 156 class used theoretical knowledge to advocate for the reinstatement of 12 lecturers from the communication studies department, including Peterson himself.

For the final project, Peterson told students to choose a topic related to a communication theory they had studied throughout the quarter.

Topics ranged from analyzing a social network to studying how messages are transmitted across different organizations, said Jenna Kieselbach, a third-year art and communication studies student and Daily Bruin contributor.

The lecturers had previously received notices warning of their possible removal.

A union contract requires the university to notify faculty members a year in advance, if there is a chance of dismissal, said Alessandro Duranti, dean of social sciences and professor of anthropology. Faculty are also required to be notified again after the initial communication if they will be retained after all.

Since the communication studies lecturers had not received their second notice at the start of the students’ final project, the students chose to design their assignment to advocate their reinstatement.

According to the students’ diffusion project, the goal was to persuade the dean to reconsider the layoffs and to facilitate communication between students and the administration to find alternative methods.

To increase awareness, the students created a Facebook group, “R.I.P. Comm. Studies at UCLA ““ Save the Value of Your Own Education,” constructed a poster for further eye-catching broadcasting and even contacted some alumni.

“With 12 lecturers gone, there would be no communication studies department,” Pierce said, referring to the group’s impetus for the project.

On March 19, the university rescinded the layoff notices of eight of 12 lecturers from the communication studies department.

Although Pierce said the group’s plan of action was set, the retraction occurred before the students saw any immediate results from their project.

“I understand the critical role of lecturers and teaching assistants, both to graduate students … and to undergraduates, who depend on them,” said UCLA Chancellor Gene Block in his update to students on Feb. 18.

According to Block’s update, the university will supply $17 million from reserves this year and next year to temporarily cover the cost of lecturers and teaching assistants.

Pierce suggested that the administration find alternate solutions to the budget crisis aside from cutting faculty and programs.

“We used to rely a great deal on state funds, but we have to figure out how to face the situation (and) be more active in generating funds than we have before, so we don’t have to layoff people,” he said.

Although the diffusion project ended because of the rescindment, the students still consider the project a success.

“We have prepared a model that can be utilized by future communication studies students, should the budget cuts again endanger the department,” Pierce said.

Peterson expressed his admiration for the students, who, he said, called for what they believed is best for the university.

“It’s inspiring to see students expanding on communication theory to address a real threat to their undergraduate education,” Peterson said.

Duranti also supports an open communication between students and the administration regarding what students care about and the teachers they value.

“It’s one of the things that’s great about the university,” he added.