Protesters anger at campus officials over fee hikes is misplaced 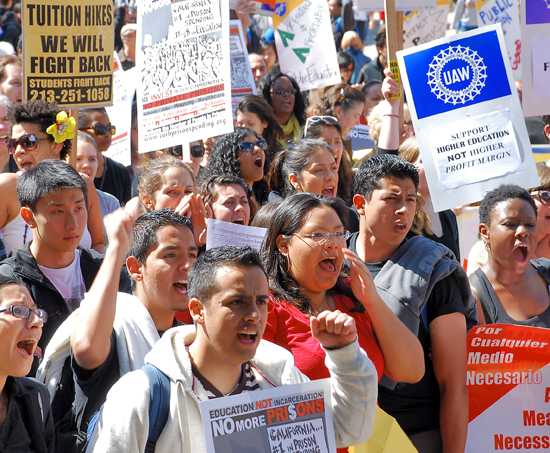 Students, faculty and workers protested fee hikes and furloughs in Bruin Plaza as part of National Day of Action to Defend Education on March 4. Student advocacy groups, UCLA-based union locals and others participated in the rally. Columnists Feeney and Dosaj feel the protests were incoherent and left much to be desired.

On March 4, students across the UCs and across the nation protested against cuts to quality education and educational funding. After tumultuous protests earlier this school year, this last wave of protest at UCLA seemed toned down, but still served to represent the frustration felt by many students. The protests, while perhaps well-intentioned, have been misguided in their methods and have come to encompass so many issues that there is no longer a single unifying message for students to rally around.

During the day of the protests, I watched a CNN reporter interview a UCLA protester in front of the chancellor’s office. The student had a grocery list of complaints that the University has to fix to appease students. Some blame was placed on the chancellor and administration for the issues plaguing the university. The chancellor, it seems, has been blamed for all the issues facing our campus ““ including increasing fees and claims of re-segregation.

These issues do trouble our university, but to bring about real change, students need to do more than give a long list of problems and hope the chancellor somehow has the power to fix them.

While we, as a university, have to discuss and address these problems, to place all of the blame at the hands of administrators and chancellors is neither fair nor accurate. UC policy, California’s budget issues and state laws all limit what actions can be taken by UC administrators. Unless we come to terms with the limitations of the situation, and realize who needs to be held responsible, we will continue to find it difficult to effect change.

Most of us came to a UC to receive the highest-caliber education possible. If we want to mitigate some of the cuts to educational quality, difficult choices that will ultimately lead to higher fees have to be made. Holding our legislators responsible for giving us a fair share of taxpayer dollars is important, but holding a sit-in at the chancellor’s office means we are failing to hold the correct people responsible. If we protest against the chancellor, we are neglecting an important ally who has the power to effectively lobby the state on our behalf.

Students seemed to also be directing blame toward the university administration for the recent racist incidents at UCSD. Some students have expressed frustration and discontent with administrators over these incidents, yet administrators are not responsible for these acts, and channeling frustration at them serves no purpose.

Administrators do not receive any benefit from low minority matriculation, which some claim has been a factor in the recent incidents. Due to Proposition 209, there are strict rules banning affirmative action at public universities.

Whether one agrees with the proposition or not, students have to face the fact that, unless it is overturned, there is little the university can do to change the admissions process without breaking the law.

We should not ignore the racist events that have occurred within the UC system, but it is the actions of specific students that are to blame here. Students and administrators of all ethnicities across the campus find recent actions deplorable. Instead of lumping all of our complaints together, we should address financial and racial issues separately and direct them at the correct places, not simply throw our voices to the air and hope that things will change.

The protesters expressed all of these student concerns and, because of the national coverage they received, let much of the nation know of the concerns of UC students. While it is important to let our issues be known to the larger public, we have to be careful about how we, as students, represent our causes.

Students, ironically, have been protesting educational cuts by walking out on their education to protest. The right to protest is important, but we have to keep in mind that we are not just trying to let our point of view be known; we are also trying to sway detractors who don’t believe higher education deserves as much funding.

As students here have advocated for their causes, it seems some have forgotten that the goal is not just to have their voices heard, but to have the complaints acted upon. If we are to have a shot at increasing educational quality and funding, then we need to make sure that we protest effectively, not just loudly.