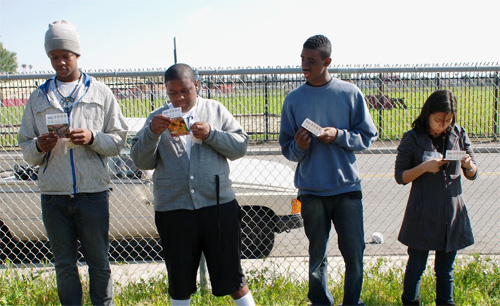 Students at Morningside High School in Inglewood read seed packet directions before planting rows of plants and vegetables at an empty lot across the street from their school as a part of the Empowerment Community Garden project. To vote for this project, go to refresheverything.com

For a group of high school students in Inglewood, a community gardening project began with picking up debris: bags, bottle caps, a sprouting potato and crack pipes.

Launched by students under the leadership of D’Artagnan Scorza, a graduate student in education, the project aims to cultivate not only the city’s first community garden, but also a sense of civic engagement and empowerment.

Once a week, Scorza and two of his UCLA classmates, Lorna Apper, a graduate student in geography and Erick Sanchez de Leon, a UCLA alumnus, drive down to teach the students everything from soil composition and water drainage to shoveling basics.

Although the weekly sessions have only gone on for five weeks, the initial idea came a year earlier. Scorza’s students in his group, the Black Male Youth Academy at Morningside High School, decided they wanted to beautify their community, Scorza said.

Since then, Scorza reached out to the local government and the Inglewood Unified School District, which allowed the group to use the district’s unused property across the street from the school’s field.

“By and large, it’s already been a success, but we’re going to see a significant success when this place is full of vegetables, fruits, trees and flowers,” said Scorza, who served as a student representative for the UC Board of Regents until 2009.

The lot right now is a growing pile of gravel, an unused well and a few patches of weeds, but the students’ dreams are big. They want to see fruit trees, sunflowers, a gravel pathway and vegetables, and eventually a farmer’s market.

For a school where nearly 80 percent of the students receive free or reduced meals and fast food chains circle the campus, the chance to grow their own food has been empowering, said English teacher Rashondra Woods, who joins her students in the weeding and digging.

“(The class) can actually see that they have the opportunity to understand that an idea sparks action and they see the result. Hopefully, they’ll see by May and June the flowers and seeds blossoming,” she said.

Although Scorza, Sanchez de Leon and Apper have pointed the students to local resources, the project is run by the students.

One of the students is Kevin Crawford, a ninth-grader at Morningside High School, who appointed himself the seed collector. As the class saves seeds from beans or fruits they have eaten, he is in charge of counting and storing them.

“It might sound boring, but it’s kind of cool because I get to count seeds when I’m bored,” said Crawford, who is learning to start a garden for the first time. “Let’s just say, (gardening) is not as easy as they make it look on TV.”

Aside from over 150 seeds collected, much of the supplies have come from the students, friends, such as Apper’s mother and neighbors.

After a city council member, Ralph Franklin, saw the students working on their first day, he rushed back with shovels, gloves and a $200 check.

Neighbors have started noticing and helping, too. Sanchez de Leon and Apper have answered the questions of curious neighbors, who are now donating their trash for the garden’s compost.

The school’s assistant principal, Joyce Rushing, is excited to see the project coming together.

“The people in this community are hungry for fresh vegetables and fruits,” she said. “And I’m really happy to see the children involved in something that’s really positive for them.”

From the partnerships Scorza has fostered with the district, school board, local government and UCLA groups, the team hopes to involve more groups in the project to help design and implement new elements for their garden, like a solar panel water pump.

The students have applied for a $25,000 grant as a part of Pepsi’s Refresh Everything, a program that allows people to vote for a community project to win money from the corporation.

To promote their project, they have made YouTube videos of their progress and will soon be completing a painted sign.

But for now, the 30 students’ homework assignment is to take care of a pea. Each student took a cup filled with soil from the lot with a seed, which they will have to water everyday.

“(My parents) are going to trip out about (the peas in the house),” said Javier Ortega, a high school senior. “But they’re going to have to deal with that to support nature. If I don’t, who else is?”

To vote, go to refresheverything.com.