Hookah proves as dangerous as cigarettes 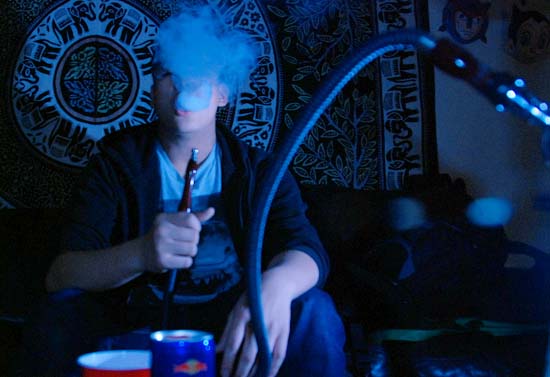 As the single most preventable cause of death in the United States, tobacco stands as health research’s greatest adversary. And as an increasing social activity among urban youth and college students, hookah stands as tobacco’s greatest undercover ally.

“It turns out that it’s really not that different from smoking tobacco from cigarettes. You’re still burning the byproducts of combustion, inhaled into lungs,” said Dr. Keith Heinzerling, an assistant clinical professor at the David Geffen School of Medicine. “Hookah is really just delivering tobacco smoke in a different way,” he added.

Hookah is a form of tobacco heated indirectly by burning embers or charcoal atop a water pipe. The emitted smoke, cooled by passing through a water bowl, is then inhaled through a rubber hose.

Its spread to Western Europe and the United States has marked it as the most recent smoking trend of the 21st century, according to the American Lung Association.

“All of the noxious elements found in tobacco occur also in hookah smoking. The big difference is the moisturizing of air,” said Dr. William McCarthy, a researcher and associate professor at UCLA’s Jonsson Comprehensive Cancer Center. “It’s apparently less irritating on the throat when “˜steamed’ tobacco smoke is inhaled, … so the mouth area, which likes to remain very moist, gets to do so.”

But the tars, nicotine, carbon monoxide and other carcinogens are still inhaled along with the vaporized smoke, McCarthy said.

While tobacco research and awareness efforts have aimed to decrease its consumption in the form of cigarettes among teenagers, the lack of research on hookah in the United States has allowed it to slip into urban and collegiate culture as a seemingly safer alternative to cigarette smoking.

“In terms of the scientific literature looking at hookah, I think it’s an area of science that’s pretty new,” said Dr. Michael Ong, assistant professor of general internal medicine and health services research at the School of Medicine. “In the U.S., it’s really a form of tobacco that’s taken off in the last five years, particularly on college campuses.”

According to the American Lung Association, one study cited evidence of a worldwide increase of water-pipe smoking, as well as a belief among 90 percent of beginning water-pipe smokers that cigarette smoking is more addictive than hookah smoking.

Along with such a misperception of hookah’s addictive qualities, the pleasure of its sweet flavor and milder sensory effect on the throat during inhalation, and its communal nature have created the facade of a less-caustic form of tobacco consumption that maintains a buzz similar to cigarette smoking, McCarthy said.

“It’s kind of like what happened when wine coolers were introduced, and also what is happening with alcoholic energy drinks,” Heinzerling said. “You’re covering the taste of the alcohol, so (younger people) want to taste it, but it’s got deadly substances in there.”

Wine coolers’ sweeter taste and smaller volume of alcohol carries less of a stigma than does a bottle of hard liquor, Heinzerling said. Similarly, tobacco smoked through a water pipe, offered at Westwood’s Habibi CafÃ© in flavors such as mango, strawberry, mint and jasmine, makes for a more tolerable smoking environment than do cigarettes.

“It’s a social thing, something to do,” said Taylor Herhusky, a first-year undeclared physical science student. “Usually it’s just something to do when we’re bored.”

An avid cigarette smoker and social hookah smoker, Herhusky purchased his own set a year ago. He takes it for a weekly smoking session at the beach or Bruin CafÃ©.

While Herhusky said he satisfies his nicotine cravings with cigarettes, he uses hookah as a social function. According to one U.S. study, a 45-minute hookah session produces 36 times more tar than does a five-minute cigarette session.

Another U.S. study found that, within that 45-minute session, the level of nicotine in the smokers’ blood increases up to 250 percent.

“The aggregate effect of hours and hours of five-minute puffs is a lot of exposure. To that extent, hookah smoking could look like chain smoking,” McCarthy said.

The longer period of exposure to the smoke also contributes to a greater exposure to the cancer-causing carcinogens of burning tobacco. Risks of throat, lung, stomach and esophagus cancer increase with hookah smoking, as well as coronary artery disease and cardiovascular disease.

“(Smoking) restricts blood vessels and makes the body more likely to form clots. It can happen even 30 seconds after being exposed to smoke,” Ong said.

The constriction of blood vessels and higher likelihood for clotting caused by the inhalation of nicotine prompts an increased risk for heart attack or stroke, Ong added.

“Smoking of any kind is not something the human body was designed to put up with. No animal would put something that’s burning in their mouth,” McCarthy said.

While there is no considerable research regarding the risks of secondhand smoke from water-pipe use, hookah smoke’s higher concentration of toxins also indicate the danger of inhaling its secondhand smoke.

In the battle between health awareness and tobacco prevention, hookah has come to the forefront as a potentially lethal ally to cigarette smoking. Though research has been limited to efforts made in the Middle East, hookah’s increased consumption worldwide will most likely lead to greater research in the United States, McCarthy said.

“People should not be kidding themselves that hookah is (safer) than cigarettes,” McCarthy said. “Everything we had to fear about smoking we have to fear about hookah smoking.”