Protest of fee increase gets raucous at UCLA 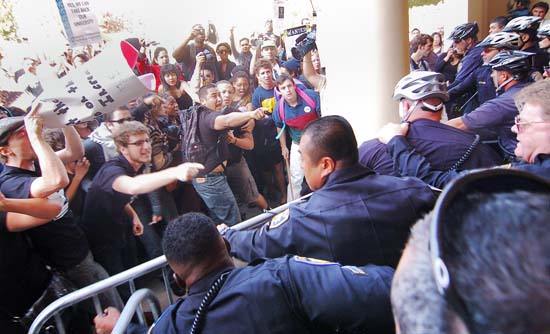 Protesters stand against barricades and a police line outside the UC Board of Regents meeting that was held inside Covel Commons on Wednesday. The Committee on Finance approved a 32 percent undergraduate student fee increase, sparking demonstrations on the Hill. The increase will be officially voted on by the UC Regents in today’s meeting.

A crowd of more than 500 demonstrators rushed Covel Commons on Wednesday to protest a proposed 32 percent student fee increase.

They were met by dozens of university police, some of whom were outfitted in riot gear.

At one point, protesters broke through police barricades that surrounded the main entrance to Covel.

Officers responded to the stampede of students and union workers by extending the metal barricades around the entrance and using nightsticks and Taser guns to force the crowd back.

“The officer (in front of me) had a Taser gun with a loaded cartridge and a finger on the trigger,” said Richard Stevenson, a fifth-year political science and African American studies student. “Officers were moving the barriers with their legs, and they moved offensively.”

Stevenson said that an officer hit him with a baton and tried to tase him. Other students also said they were tased and hit with batons by police.

There were no reported injuries, according to university spokesman Phil Hampton.

Around noon, university police declared the protest unlawful after bottles and rocks were thrown at police officers. Officers threatened to arrest participants who did not disperse immediately.

“We care about what’s going on, and we hold (the UC Regents) accountable to the students,” said Jan Victor Andasan, a campus organizing director for the Undergraduate Students Association Council External Vice President’s office who helped organize the rally. “This (protest) has such a big effect because it doesn’t happen every day.”

All morning, students and union workers marched in a large circle between the Student Technology Center and Covel Commons, chanting slogans such as “Whose university? Our university” and carrying bright signs. The protesters directed their efforts to different areas outside Covel, moving from the front entrance to the side of the dining hall and then to the south side of the building.

“People are only here (at the protest) because they’re passionate about education,” Stevenson said. “People didn’t come out to be violent.”

Upon watching the struggle between the protesters and the police, UC Office of the President spokesman Peter King said the protesters seemed to follow the orders of UCPD, but at the same time, showed their feelings.

King said that, although the protesters had every right to be there, “what was frustrating was that (the anger) seemed to be aimed at the wrong entity.”

The fault lies not with the regents, but with the state government for underfunding students’ education, he said.

“We are raising fees because we have no other options. The only other option is to let universities slide into mediocrity by letting teachers leave and the university deteriorates,” King said. “This is a great university, and we’re trying to keep it great.”

After the scene was declared unlawful, police formed a line from the side of Delta Terrace to Covel to push demonstrators away from the building altogether.

Some protesters then left the area, though many came back quickly or stayed to show their solidarity, students said.

Later in the afternoon, protesters gathered along the south side of Covel, shouting “Cut from the top” and “Free UC.”

Despite the approval of the fee hike, students said they remain determined to express their beliefs.

“The battle’s not over, the fight’s just starting, and students are literally fired up and ready to go to protect higher education,” said Christopher Santos, another campus organizing director for the USAC EVP’s office.