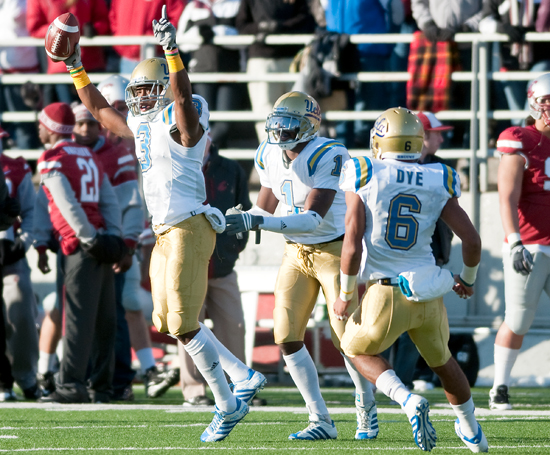 UCLA and Arizona State have a lot in common.

The Bruins and the Sun Devils each hold a 2-5 Pac-10 record.

Twenty-nine Bruins have made their debuts during this season. The Sun Devils have premiered 25.

UCLA’s Rahim Moore has an NCAA-leading nine interceptions, while nine different Arizona State players have intercepted a pass this season.

Finally, both teams dipped into their quarterback reserve in an effort to combat the injury bug.

“They, like us, are trying to finish the season with a flurry, and I know that this game looms large for both programs,” said UCLA coach Rick Neuheisel at Monday’s weekly press conference.

The Sun Devils are the most recent victims of a quarterback quandary ““ a jam the Bruins are all too familiar with, but seem to have remedied for the time being.

Senior Danny Sullivan started each of ASU’s first nine games under center, but after he suffered a right biceps injury in practice last week, Brock Osweiler got the start versus Oregon last weekend.

Osweiler, the freshman from Montana, was knocked out early in the second quarter and redshirt sophomore Samson Szakacsy, making only his third appearance for the Sun Devils, finished the game.

Osweiler is the probable starter for Saturday.

“He’s more mobile than you’d expect from a guy of his size,” said Neuheisel of Osweiler, who checks in at 6 feet, 8 inches tall.

In addition to acknowledging the similarities between the two teams, the Bruins recognize the potent force of the Sun Devils’ defensive unit.

At the forefront of the Bruins’ game plan is the pass-rushing, run-stopping threat that characterizes the Sun Devil defense.

“The ASU defense is unlike what (UCLA quarterback Kevin) Prince has seen, which requires a great plan and great execution,” Neuheisel said.

During the 2009 season, the Sun Devils’ opponents have run 616 plays, 103 of which have resulted in negative yardage or no gain.

The Bruins handily defeated Washington State Saturday 43-7 in one of the Bruins’ most productive offensive showings this season. To meet the challenge ASU’s defense poses, UCLA will look to rekindle some of the magic they discovered in Pullman.

UCLA hovers just one win away from bowl eligibility, looking for that all-important sixth victory this weekend when ASU visits the Rose Bowl. UCLA’s season finale against USC will take place on the Saturday of Thanksgiving weekend.

For now, the Sun Devils are the deciding factor in the Bruins’ postseason hopes as they seek their first bowl berth since 2007.

“Arizona State,” said Neuheisel when asked about his team’s bowl potential. “Nothing else matters.”

Ayers had a pair of interceptions against Washington State that helped turn the tide in UCLA’s favor.

His first came in Washington State’s third play of the game.

On the subsequent play, the Bruins’ first offensive snap of the game, Prince connected with Taylor Embree for a 27-yard touchdown.