Alum Geoffrey Strand leads every man, woman and child in cheer at the Rose Bowl 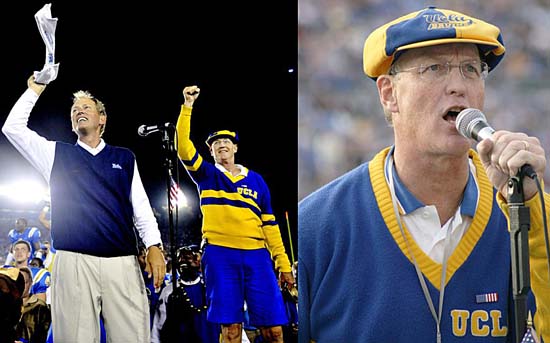 Alum Geoffrey Strand leads every man, woman and child in cheer at the Rose Bowl

On Game Day, the familiar phrase resonates throughout the Rose Bowl’s eastern half.

“Every man, woman and child! Stand up and cheer!”

Its source? The reverberating vocal chords of a 1971 alumnus, a Bruin ill-intent on rescinding the duty he once held as UCLA’s head cheerleader.

Geoffrey Strand’s popular punch-line developed in response to the turmoil that epitomized reality during his days as a student on the Westwood campus. At the time, protests and flag burnings were not uncommon, and power struggles both social and political pervaded the national and local scene.

As part of his campaign for head cheerleader, a student-elected office in those days, Strand created the trademark catchphrase to rouse memories of the good times. This imagery, epitomized by the Beach Boys’ “Happy Days” stereotype for optimism, was Strand’s attempt at a reversion to normalcy.

“Deep down, people wanted to belong to something good, something that brings people together,” he said.

No one thought Strand would be elected. In fact, the Los Angeles Times and the Daily Bruin derided his patriotic campaign efforts.

Strand went on to win the office by a landslide, garnering more votes than all the other candidates combined.

It was the last year the position of head cheerleader appeared on the ballot for student-elected offices.

In 1976, after a five-year hiatus from the football field, Strand returned to his podium on the Bruin sideline at the request of then-coach Terry Donahue. He hasn’t left since.

A fixture at every UCLA home football game for nearly 40 years, Strand has witnessed the evolution of UCLA’s alumni fan base. What was once an unenthused assembly has become a cult of personality recognized by college football coaches around the nation ““ including USC’s Pete Carroll ““ as the most hated alumni section in college football.

More than an observer, Strand played a key role in facilitating the evolution of the UCLA football fan.

“Everything I’ve tried to do is bring the active fan to UCLA,” he said. “There wasn’t a good outreach program before.”

In the 1970s, the UCLA fan virtually did not exist. The Coliseum, then the Bruins’ home field shared by the Trojans, wasn’t conducive to breeding the die-hard Bruin football fan, as tailgating was unheard of and school spirit was untapped.

“I couldn’t even give away half a keg of beer,” Strand said.

A solid fan base was visibly absent from UCLA football games, and ticket sales were lousy. Even Donahue took notice.

In fact, Donahue personally sought out Strand, along with other “innovative alums” such as former line coach Jerry Long, to cultivate a united football following.

Strand played a key role in creating of the Breakfast Club, a pre-game party for alumni, and creating regional Bruin support groups from locales such as the San Fernando Valley, Orange County and Riverside, among others.

The Bruin Belles, an earlier rendition of the UCLA cheerleader, ran card tables and raffled prizes to game-goers. Strand also orchestrated the creation of a 12-piece alumni band, for which he played the trombone.

“Bringing these groups together was a great way to expand the fan base,” he said.

The UCLA fan base maintained momentum even after the football team relocated to the Rose Bowl in 1982.

During the 2006 USC-UCLA matchup at the Rose Bowl, five of the six penalties the Trojans suffered for illegal movement happened because the snap was inaudible. Each of these plays occurred on the eastern side of the field, where the alumni section makes its residence. The Bruins won that game, 13-9.

At UCLA’s most recent home game versus Washington, 1,200 alumni athletes attended a pre-game tailgate held on the grassy knoll near the Rose Bowl’s front entrance. Alumni events are held on a regular home-game basis, either self-organized or UCLA-sponsored.

Alumni versus the Den

Today, the alumni section surpasses the student section, the Den, in vocal reach and sheer economic muscle. The Den rarely reaches full capacity, save for games versus high-profile opponents in USC or California. Hardly ever does a seat go unfilled in the alumni section.

Gina Garrett, a Bruin who attended the university in the late 1980s and now works for UCLA Athletics, notices a blatant discrepancy in the number of students who attend football games compared to turnout in the late ’80s.

“It hurts our student body that our stadium is not on campus and requires a full-day commitment whenever they look into attending a game,” he said.

Scott Rothstein, the chairman of the Rally Committee in 1991, noted card shows were a dominant feature of football games for students. Three thousand Den members would participate. Today, the number of card shows and the number of students have considerably lessened.

Garrett also accounts a more competitive collegiate curriculum and environment for the lower student turnout. When she offered five of her student Rose Bowl volunteers free tickets to good seats to watch the game, all five declined the tickets.

“They all wanted to return to campus to study,” she said. “I just think that the students at UCLA take their studies a lot more seriously than we did back in the day.”

When Strand takes the center mike, his booming voice reaches all spectators settled on the sunny side of the Rose Bowl.

“I’m just a sparkplug,” he said, insisting his prominently displayed persona serves simply to ignite the fans’ flair for school spirit. The rest he attributes solely to the Bruin faithful.

Strand doesn’t get paid to cheer at UCLA football games ““ he’s got his day job as a senior vice president at Morgan Stanley to take care of his expenses.

“I buy my own season tickets and write the annual check to Athletics,” he said. “I walk the walk and talk the talk.”

The alumni cheerleader once cheered at every UCLA football game and every home basketball game.

“That was B.C.,” said Strand, or before Cindy, his wife. Now, he makes his haven exclusively behind the UCLA bench on the Rose Bowl’s sunlit side. During every home game, Strand calls upon every man, woman and child to rise to their feet and support their UCLA counterparts wrestling for respect.