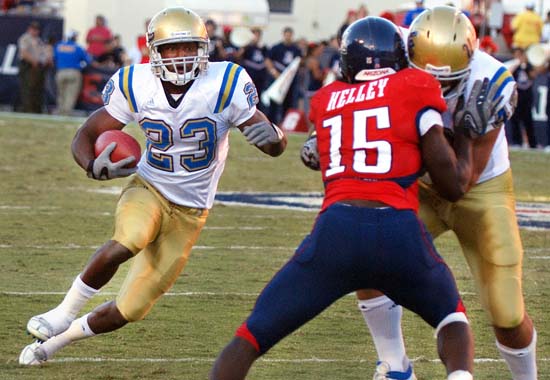 Redshirt freshman running back Johnathan Franklin runs the ball during Saturday’s game against Arizona State in Tuscon, Ariz. Franklin rushed for 36 yards while the rest of the UCLA run offense managed just 65.

CORRECTION: UCLA football coach Rick Neuheisel was referring to the players, not the fans, when he said that their frustrations were the “byproduct of a losing streak.”

In 2008, the UCLA football team managed a 3-6 record in Pac-10 competition. But to match coach Rick Neuheisel’s record in his inaugural season at the helm, the Bruins need to win three of their final five contests in 2009.

Can they do it?

“We’re going to do what it takes,” Neuheisel said. “I still see great things.”

The final stretch for the Bruins begins on Saturday at Oregon State (4-3, 2-2 Pac-10), who lost at No. 4 USC in their most recent game. In the following weeks, UCLA will take on Washington, Washington State, Arizona State and USC. The Bruins will host the Huskies and Sun Devils in their two remaining home games at the Rose Bowl Nov. 7 and Nov. 21, respectively. The season concludes with the Los Angeles rivalry game at the Coliseum.

In the midst of four consecutive Pac-10 losses, the great things expounded from Neuheisel’s perspective are shadowed by UCLA’s inability to deliver a win.

The coach pointed to generating a more favorable turnover ratio and running the ball more as areas in need of improvement.

In Monday’s press conference, Neuheisel exuded his usual optimism, while acknowledging the mounting frustrations of the Bruin fans and, more critically, of the team itself. He recognized those aggravations as the “byproduct of a losing streak” and profusely defended his players’ work ethic.

“We’re not getting lackadaisical effort,” Neuheisel said. “Guys are playing with great enthusiasm, there’s no loafing on the tape.”

The numbers, though, tell a different story. For much of the season, UCLA has shown an inability to execute offensive plays and successfully get the ball in the end zone.

Saturday’s offensive showing versus Arizona is the most recent example. The Bruins offense squeaked out just 211 yards, 146 in the air and 65 on the ground. Two field goals were the only points mustered by the Bruins’ offensive unit in the 27-13 loss to the Wildcats.

Not even a change in personnel could jumpstart the Bruins’ offense; UCLA played three quarterbacks, Kevin Prince, Kevin Craft and Richard Brehaut, none of whom were able to generate a spark.

Neuheisel sees the team’s current inability to execute on third-downs, both offensively and defensively, as an obstacle to getting points on the board. In conference play, the Bruins successfully convert just 26 percent of third-downs on the offensive side of the ball. On defense, UCLA prevents their opponent from converting on third-down only 44 percent of the time.

“It’s too high a hill to climb when the time of possession is out of whack,” Neuheisel said.

Neuheisel pledged to take it one game at a time over the season’s remaining weeks, aiming to address the team’s areas of concern so that UCLA might land a bowl game berth.

“I would be disappointed if we don’t make postseason this year,” he said. “But I believe we have what we need to get that accomplished.”

Redshirt freshman Kevin Prince will start this weekend at Oregon State. Brehaut, a true freshman, and redshirt senior Craft will be available if needed.

Neuheisel noted that Brehaut “deserves some meaningful playing time, not just at the end of a ballgame.” The freshman has entered three games off the bench, but has yet to play in a vital situation. It’s not a matter of taking playing time away from Prince, Neuheisel added, but rather developing the two young quarterbacks concurrently.

QUICK HITS: Senior linebacker Reggie Carter is still nursing a sore knee, but the training staff said he is improving. Carter did not start at Arizona but still managed to lead the team with eight tackles … Cornerback Aaron Hester will compete this week for the starting position opposite Alterraun Verner. Hester returned to full practice last week but did not play against Arizona.