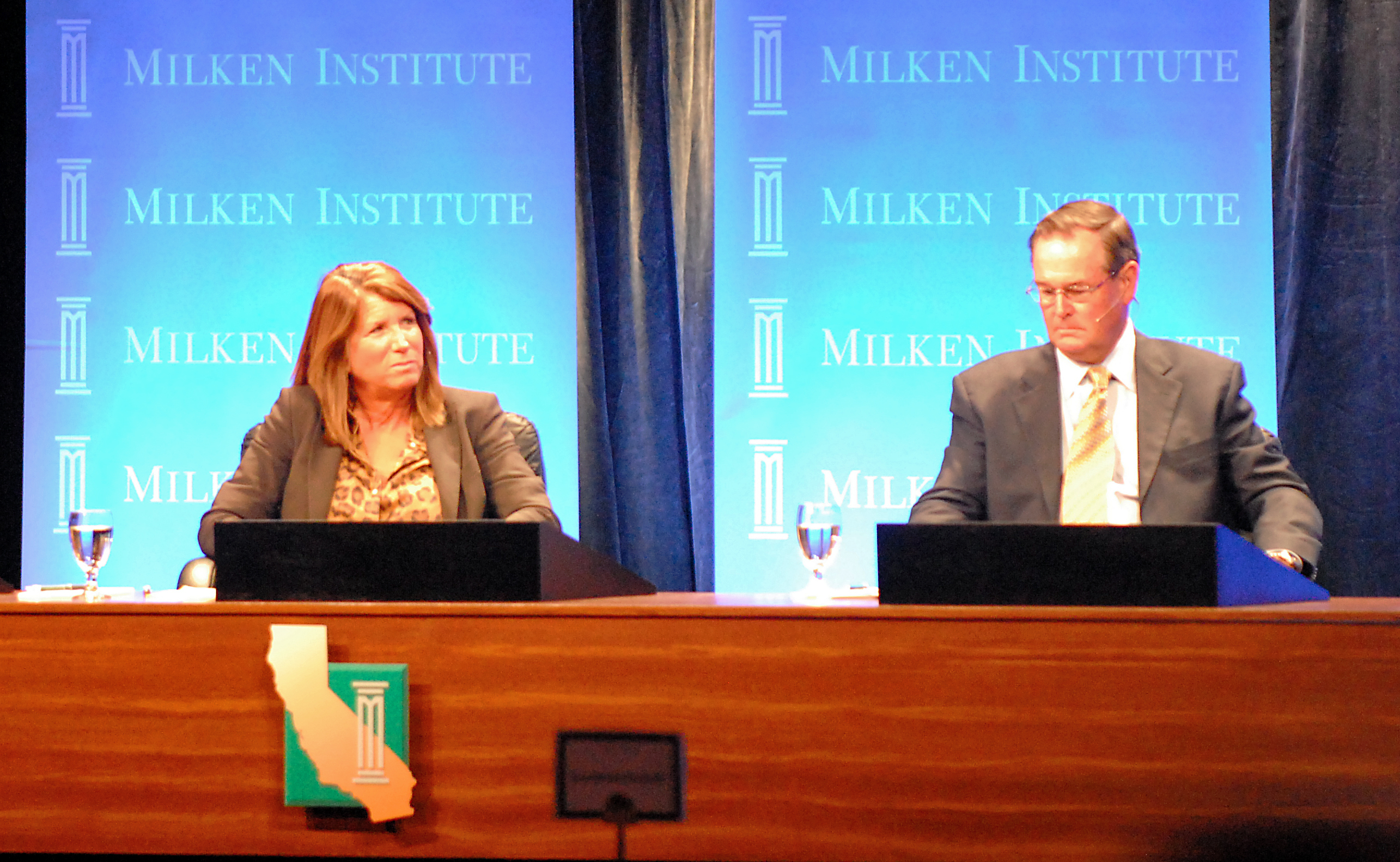 UC Regent Bonnie Reiss and William Hauck, current member and former chairman of the Board of Trustees of the CSU system discuss higher education.

Despite drastic cuts to the University of California budget, higher education in the UC is not broken ““ at least according to UC Regent Bonnie Reiss.

“Not only is higher education not broken in California, it’s the best in the country,” Reiss said. “We’re trying to prevent it from becoming broken.”

Reiss spoke to an audience of CEOs and businesspeople from across the state on Tuesday at the Beverly Hilton along with UC San Francisco Chancellor Susan Desmond-Hellmann, the CEO of McAfee Capital and the mayor of San Francisco.

She spoke as part of a panel at the Milken Institute’s State of the State Conference, addressing recent reduction of enrollment, increased tuition and decreased numbers of faculty at UC and CSU schools.

Michael Klowden, president and CEO of the Milken Institute, who moderated the higher-education panel at the conference, said UC campuses are one of the great strengths of the state of California and one of the state’s great hopes for the future.

In light of the recent California budget crisis and more than $3 billion cuts in the last year to higher education, he also referenced the current challenges.

Reiss addressed these challenges, speaking alongside William Hauck, a current member and former chairman of the Board of Trustees of the California State University system.

Hauck and Reiss echoed similar concerns, shedding some light on what is currently at stake in California, and Hauck called reductions in enrollment and graduation rates “a problem.”

“If we cannot overcome the difficulties discussed … we will be in a very different place (in) our ability to compete,” he said, adding that no one wants to see the quality of education in California diminished.

Reiss introduced a discussion of whether to look at three-year degrees, hence reducing the number of units required. She spoke of the 5 percent decrease in state funding that has been dedicated to higher education since 1990.

She said that she feels strongly that privatization is not the correct course of action for the UC system.

“I, as a regent do not think that’s the answer,” she said. “Nor do I think (UC President Mark) Yudof or the other regents believe it is. The goal is to keep it public.”

The solution ““ at least temporarily, she said ““ may be to raise money from alumni associations and lobby for money from other donors.

Reiss said one thing she said is clear: Whatever negotiations are made, “higher education needs to be on the top three list of things that get considered” in Sacramento.

Ultimately, the two panelists appealed to the audience in hopes of reminding them that education is “human capital” for California and thus of great importance to the revival of the state.

Hauck discussed implications for the CSUs, which he said have already reduced enrollment by about 40,000 students.

“If we reduce enrollment at that level, we are going to have to reduce the number of graduates,” he said. “So we have a real challenge, we have a real opportunity here at the same time.”

Reiss said that Californians, including those present at the meeting, should “get creative” with their solutions.

Combining forces and conducting “multi-system” discussions between UC and CSU were called for by Hauck.

“Both systems have raised fees,” he said. “But we know that’s not the answer.”